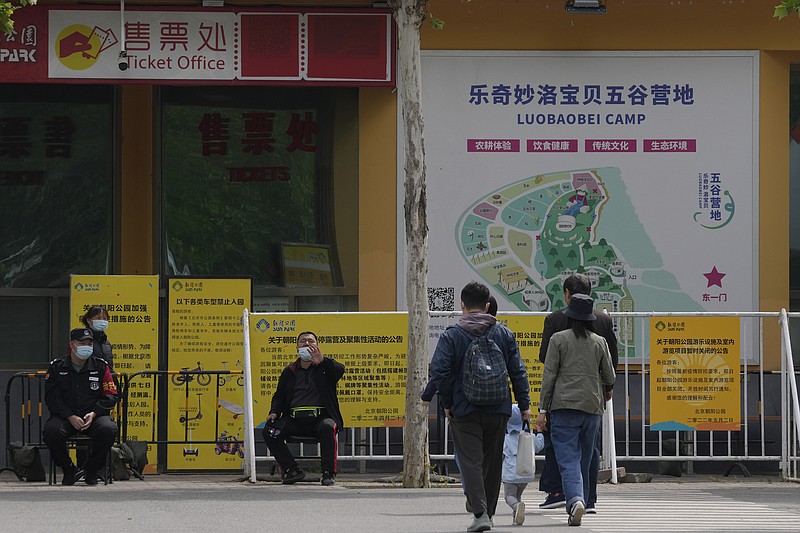 Security personnel turn away residents from Chaoyang park which was closed due to pandemic measures on Monday, May 9, 2022, in Beijing. (AP Photo/Ng Han Guan)

BEIJING -- Authorities in Shanghai have again tightened anti-virus restrictions, just as the city was emerging from a month of strict lockdown because of a covid-19 outbreak.

Notices issued in several districts said residents were ordered to stay home and are barred from receiving nonessential deliveries as part of a "quiet period" lasting at least until Wednesday. The tightened measures could be extended depending on the results of mass testing, the notices said.

It wasn't clear what prompted the renewed tightening, with numbers of new covid-19 cases in the city continuing to fall.

Shanghai on Monday reported 3,947 cases over the previous 24 hours, almost all of them asymptomatic, along with 11 deaths. Authorities have been gradually lifting isolation rules on the city's 25 million residents, but the new orders appear to be returning to conditions at the early stage of the outbreak.

Shanghai originally ordered mass testing along with a limited lockdown, but extended that as case numbers rose. Thousands of residents have been forced into centralized quarantine centers for showing a positive test result or merely having been in contact with an infected person.

A marketing professional in the western Pudong district said quality of life has been declining even as living expenses continue to rise under lockdown.

"Every time, they say lockdown will be eased after a few days, but there seems to be no end," said the woman, who asked that she be identified only by her surname, Lu, to avoid repercussions from authorities who have cracked down heavily on dissent.

"All aspects of work are affected. I don't know when it will be time for the lockdown to come to an end," Lu said.

In Beijing, authorities closed down the largest city district, with residents told to stay home and stores closed. Beijing has ordered daily testing of all residents, closed parks and other leisure venues and limited restaurants to takeout business only.

The Sanlitun area, crammed with restaurants, boutiques and an Apple store, was all but deserted. Despite that, retiree Yang Xiaochang said Beijing appeared to be far better prepared to weather the surge than its southern cousin.

"Even though at the beginning there were some panic buying, ... Beijing will not be like that," Yang said, referring to Shanghai.

Still, companies and investors worry the ruling Communist Party's "zero-covid" strategy that closed most businesses in Shanghai and other industrial centers is disrupting global trade and activity in autos, electronics and other industries.

Exports rose 3.7% over a year earlier to $273.6 billion, down sharply from March's 15.7% growth, customs data showed Monday. Reflecting weak Chinese demand, imports crept up 0.7% to $222.5 billion, in line with the previous month's growth below 1%. 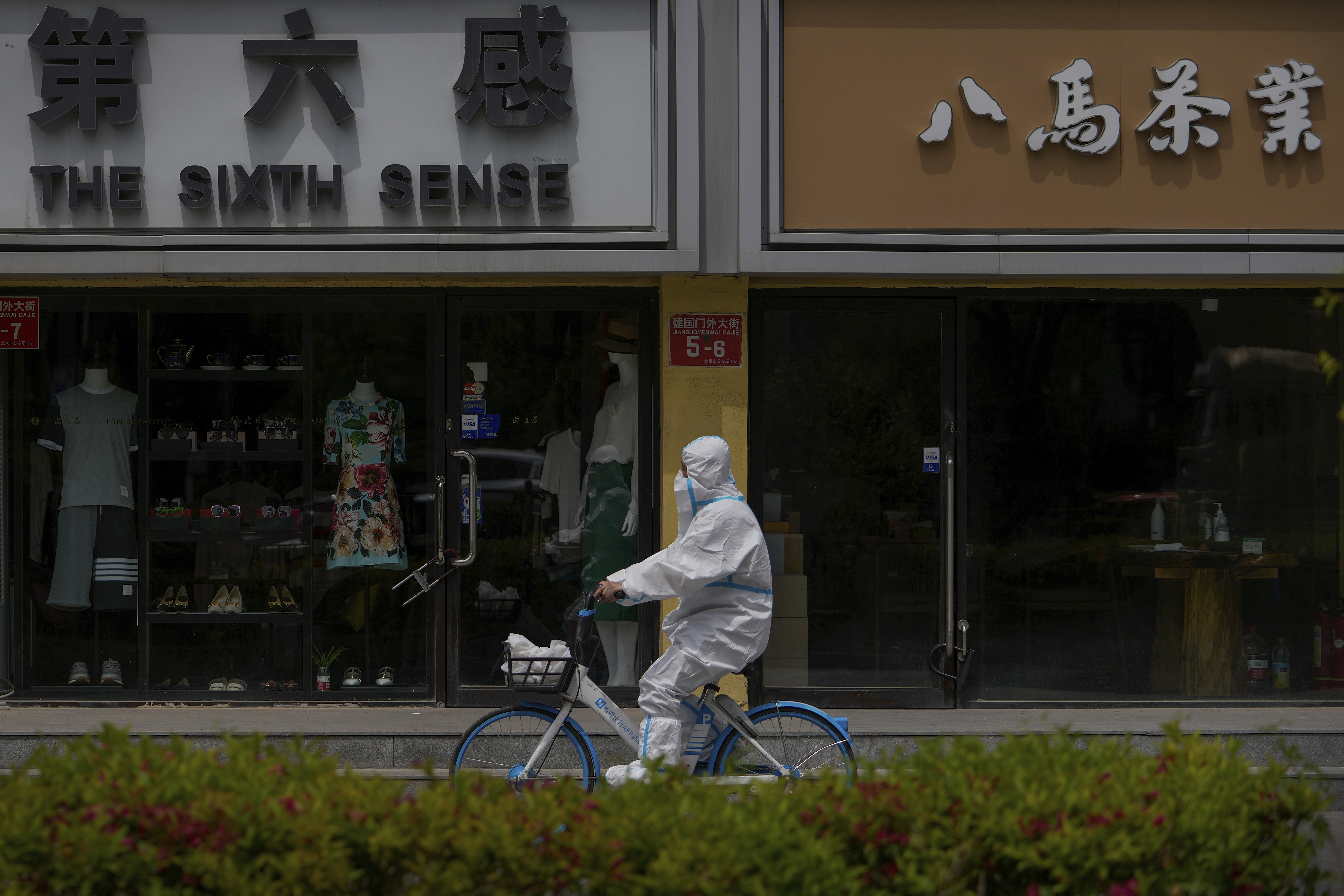 A worker in a protective suit rides a bicycle past shuttered retail shops after authorities ordered the closing down of non-essential businesses and asked people to work at home in the Chaoyang district on Monday, May 9, 2022, in Beijing. (AP Photo/Andy Wong) 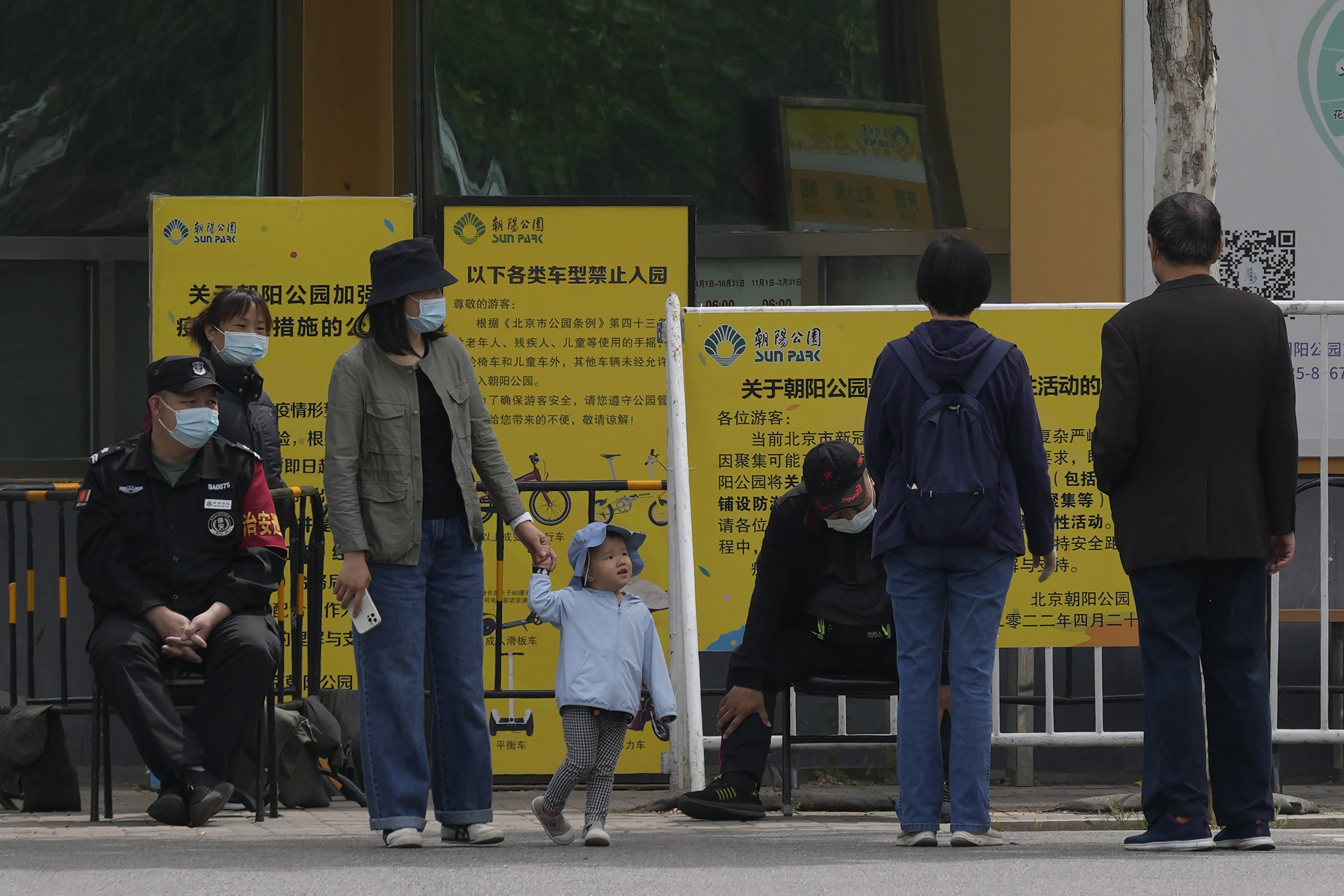 Residents leave after being turned away from Chaoyang park which was closed due to pandemic measures on Monday, May 9, 2022, in Beijing. (AP Photo/Ng Han Guan) 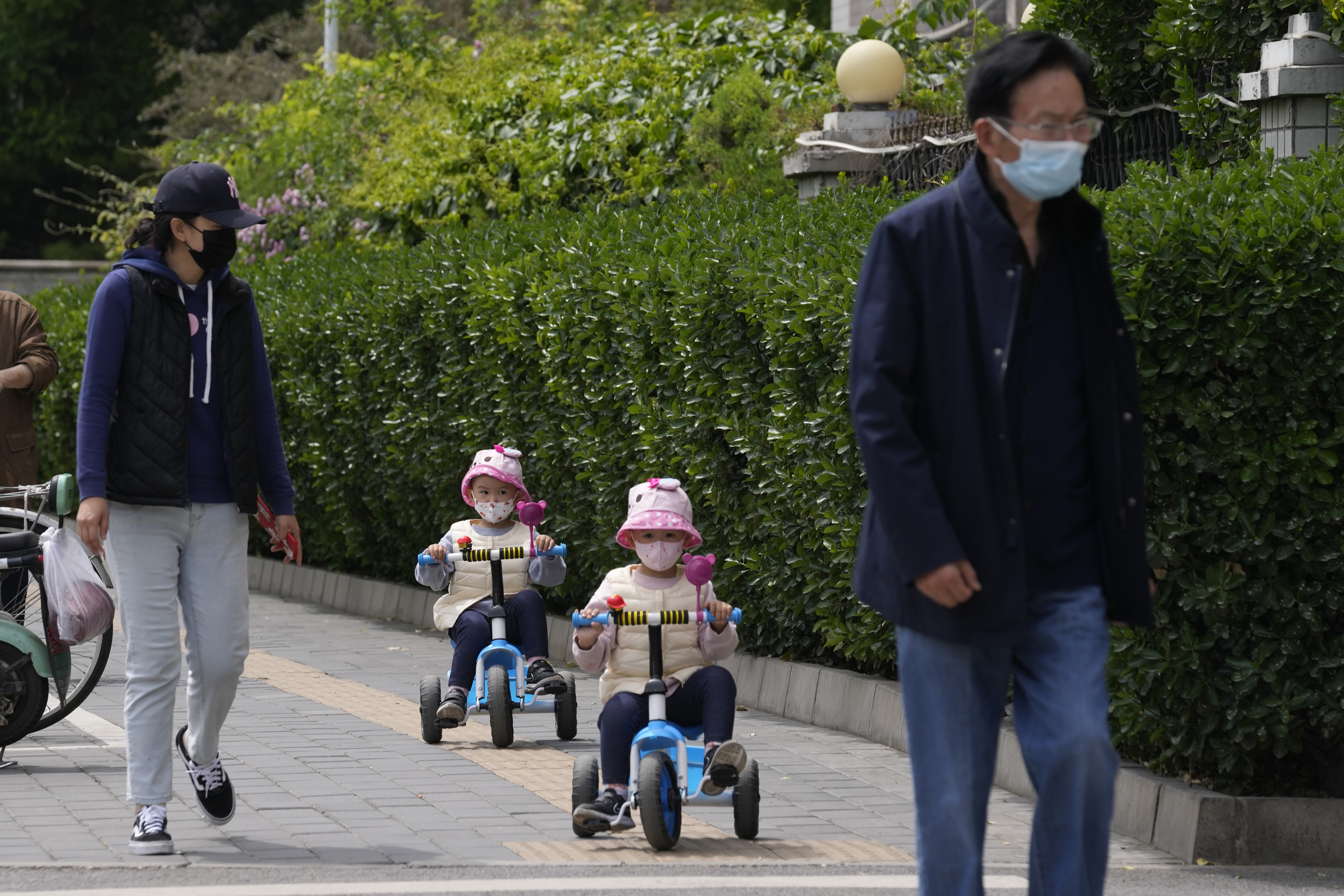 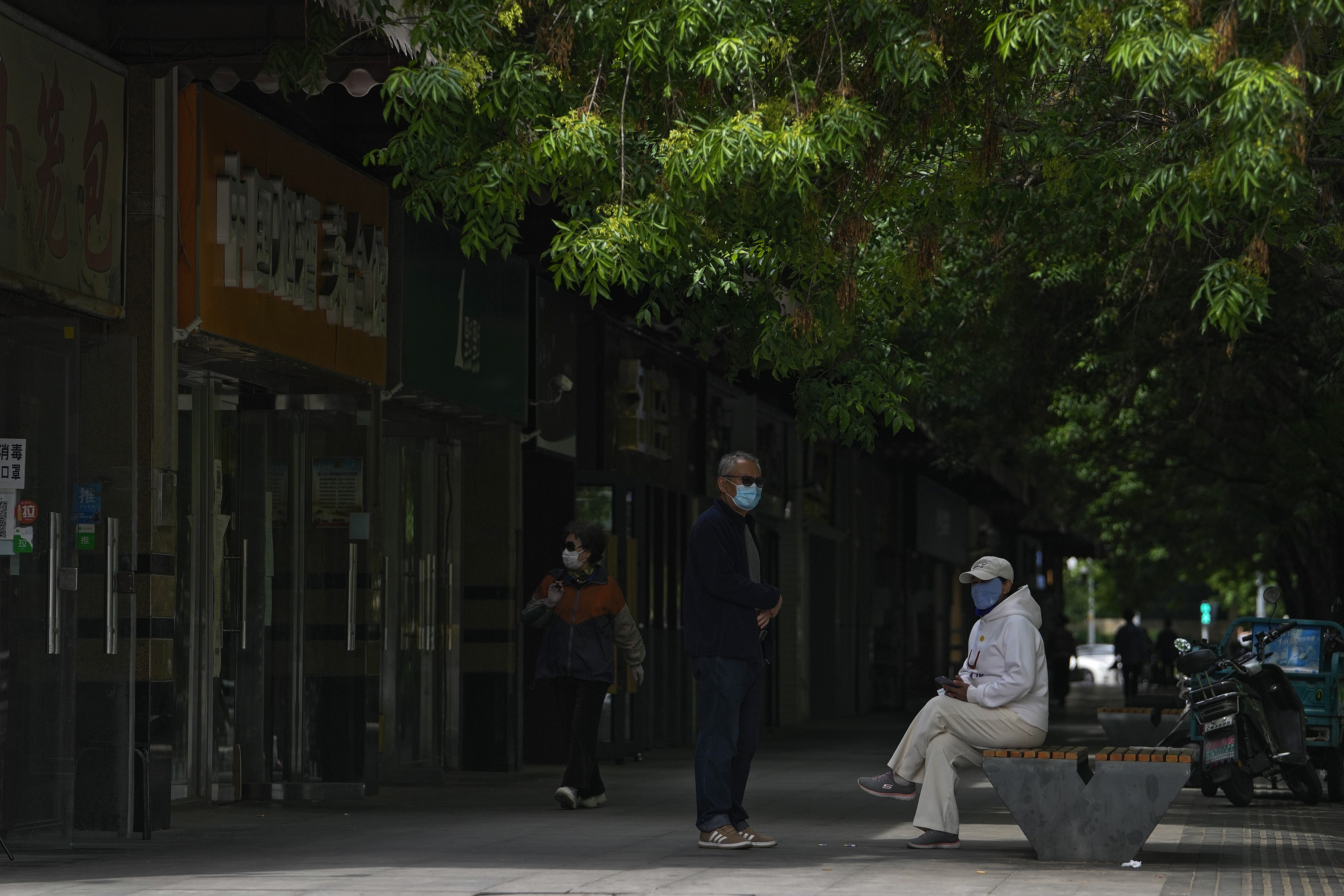 Residents wearing face masks take a rest near shuttered retail shops after authorities ordered the closure of non-essential businesses and asked people to work at home in the Chaoyang district on Monday, May 9, 2022, in Beijing. (AP Photo/Andy Wong) 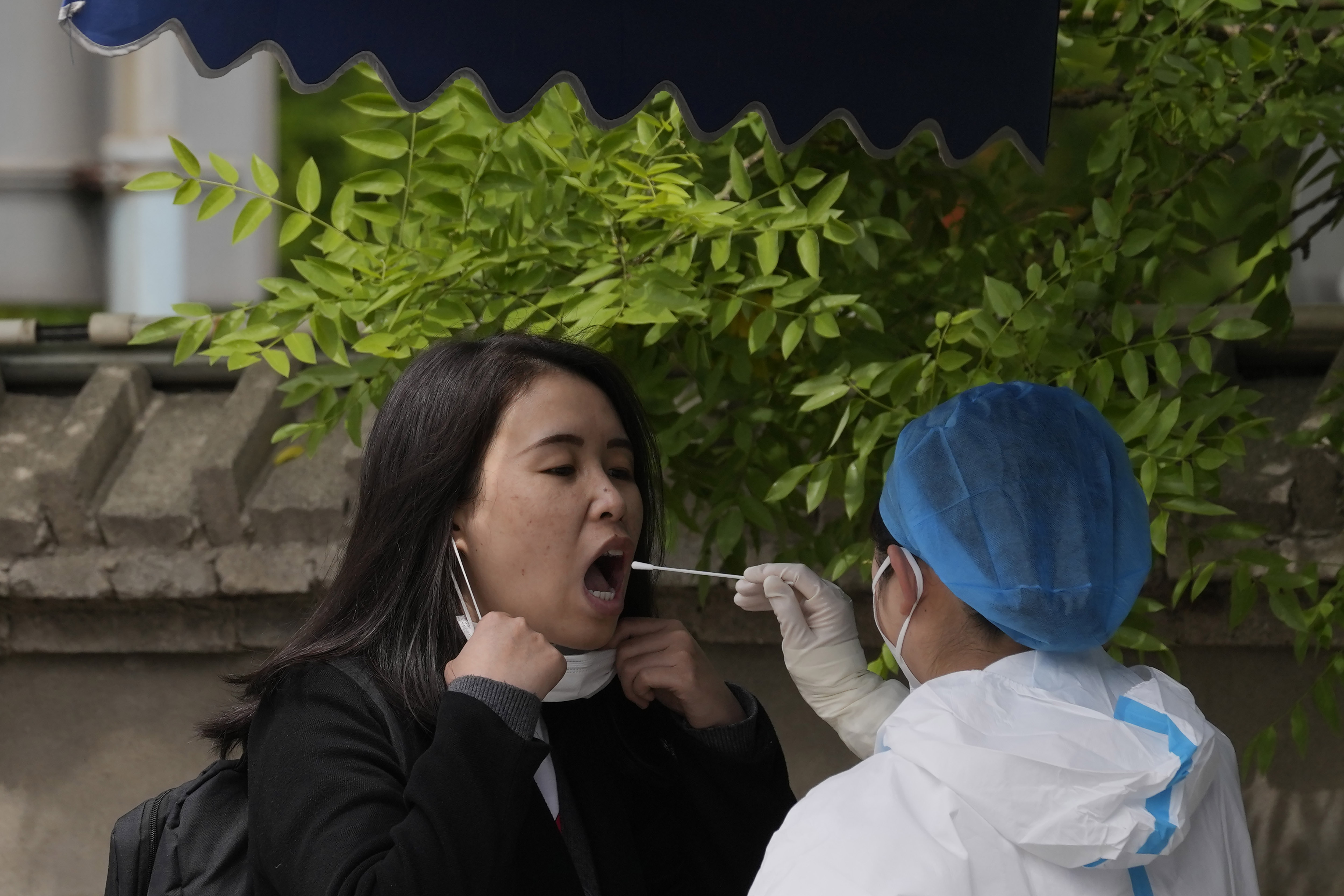 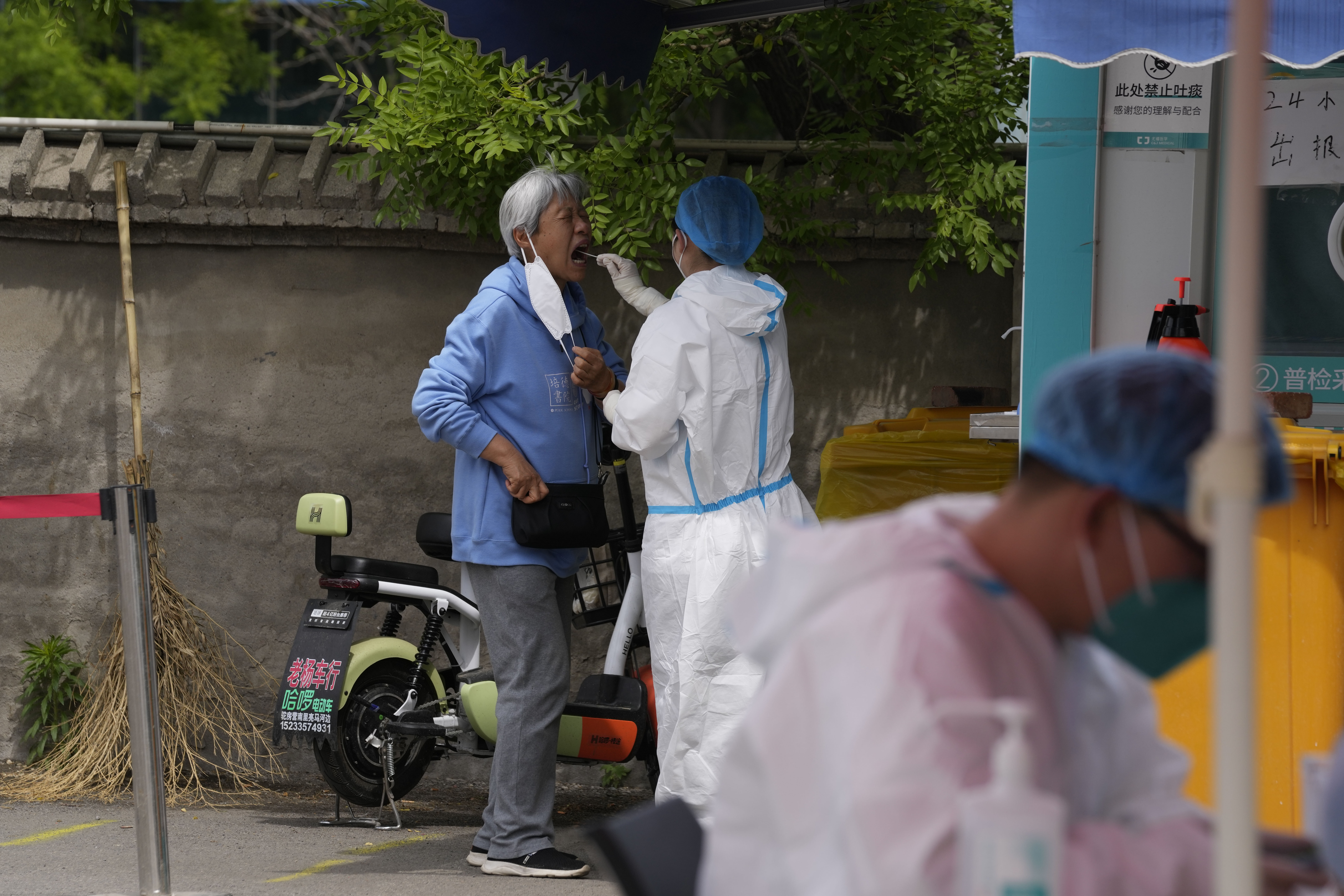 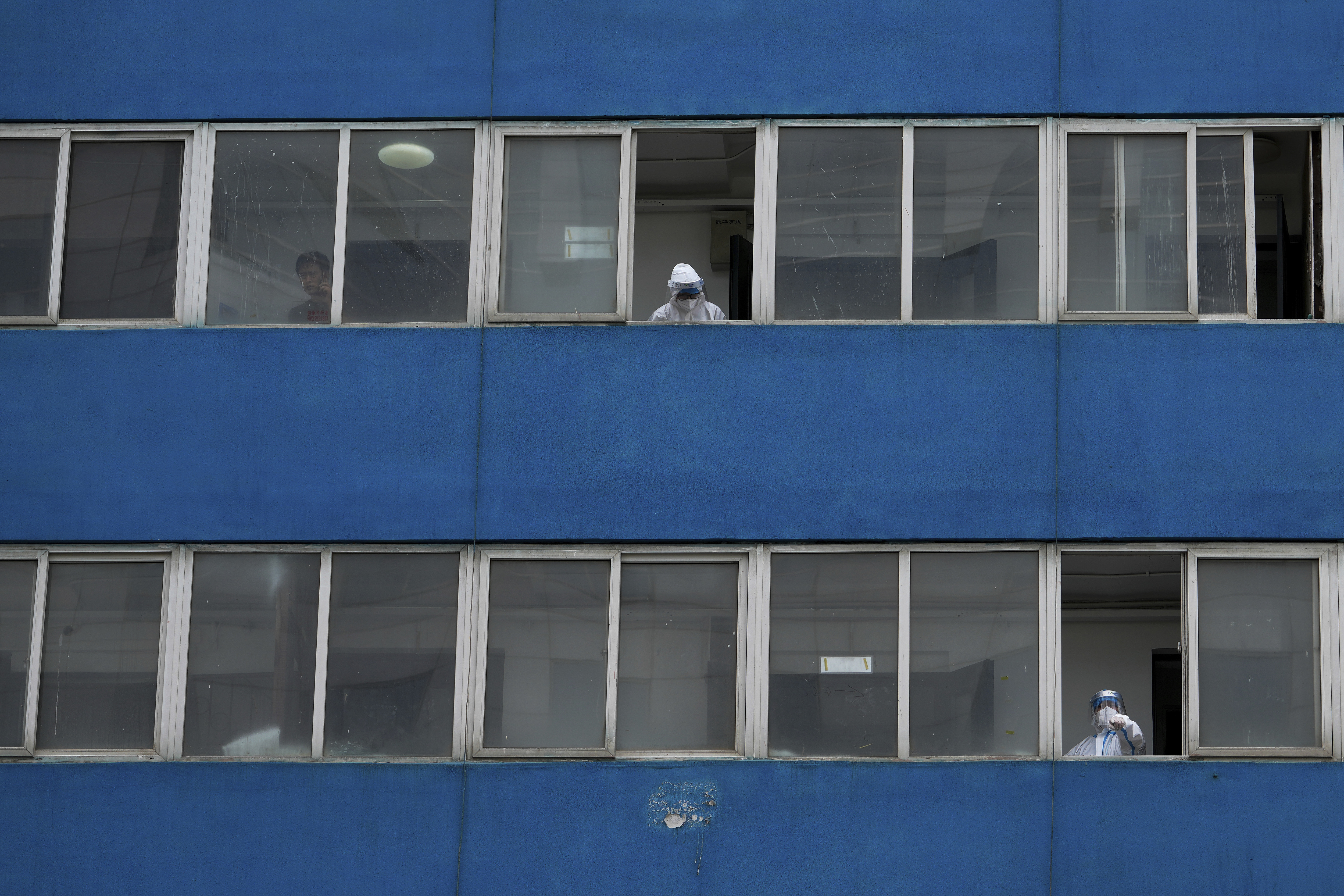 Workers in protection suits watch over a locked down residential complex following a COVID-19 case was detected in the building on Monday, May 9, 2022, in Beijing. (AP Photo/Andy Wong) 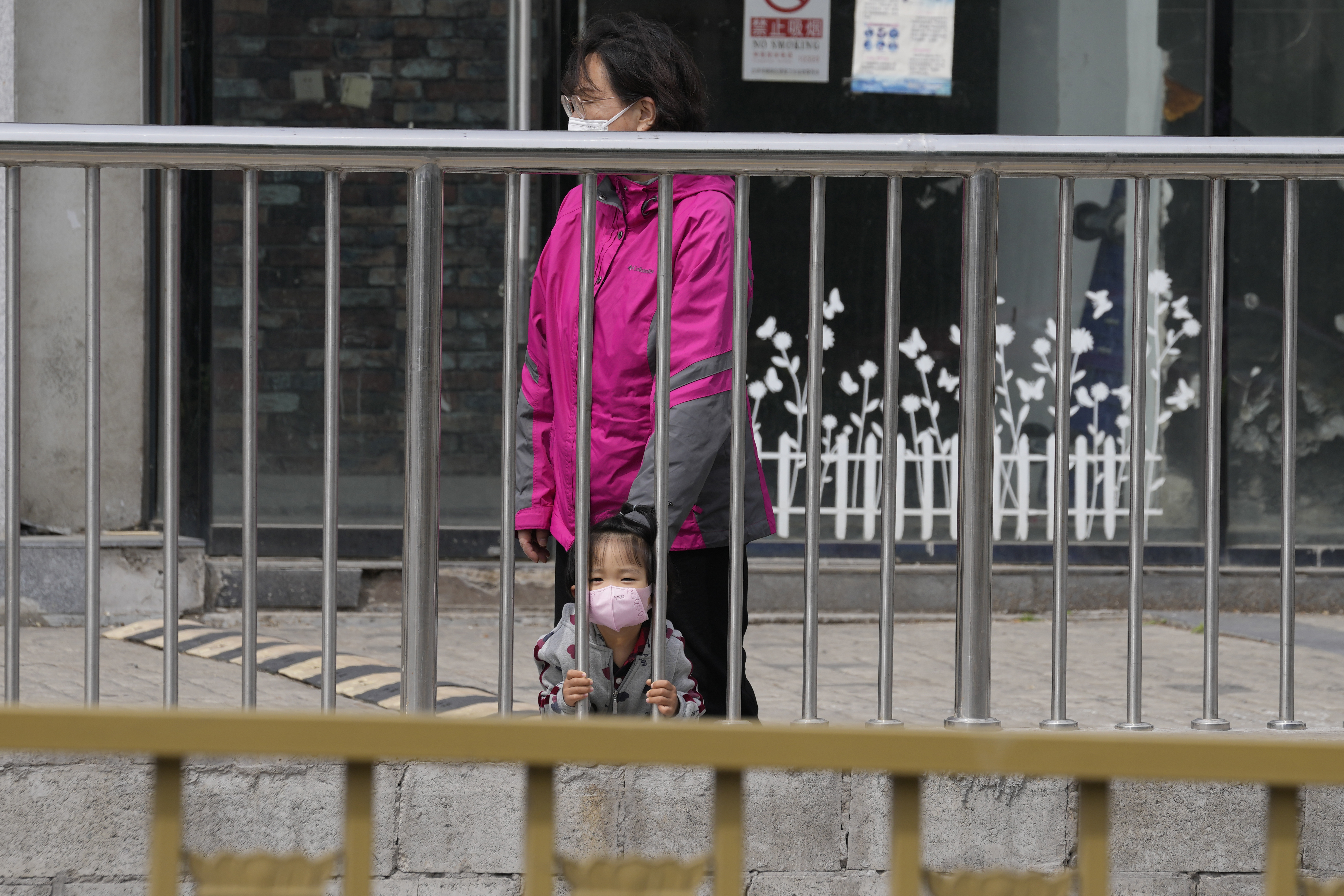 A child wearing a mask looks out from a barrier near closed shops on Monday, May 9, 2022, in Beijing. (AP Photo/Ng Han Guan) 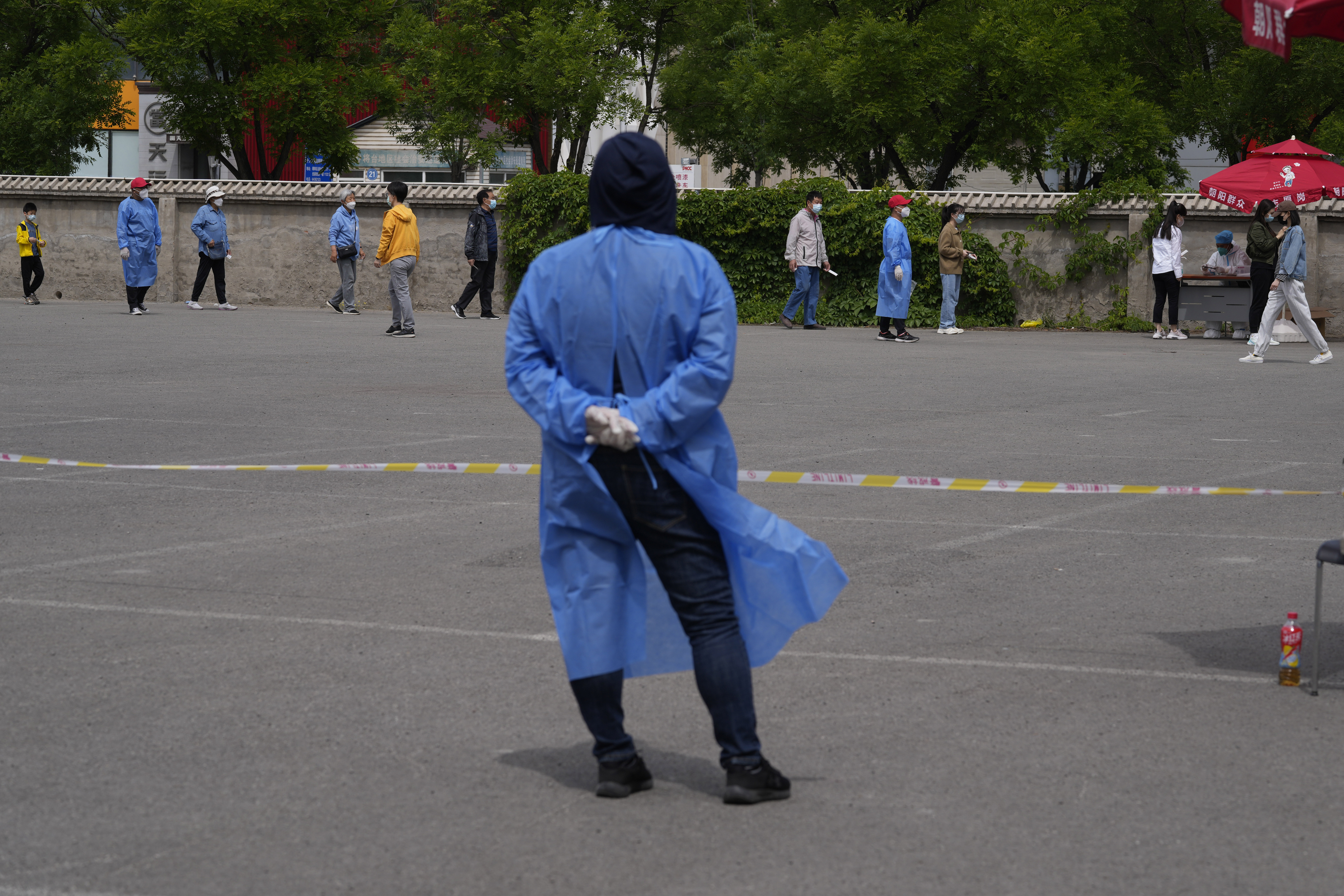