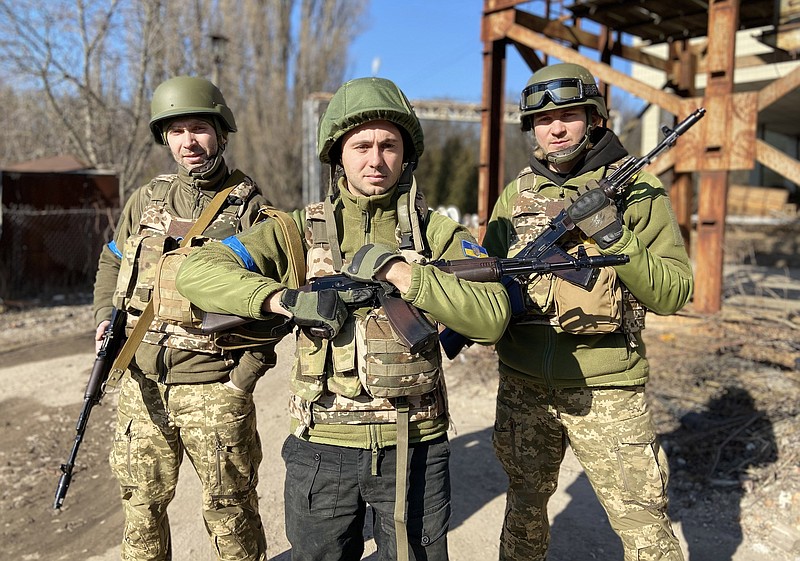 LONDON — In his hit single "2step," British artist Ed Sheeran sings about how dancing with the woman he loves makes his troubles disappear.

That line has special resonance for the Ukrainian band Antytila, whose members are now fighting Russia, and who just released a remix of "2step" with Sheeran to benefit the war effort.

"Personally, I am singing to my sweetie, to my wife, [who is] now in the United States with my kids," says Taras Topolia, 34, the band's lead singer-turned-paramedic.

Topolia, who sings a new verse in Ukrainian that he wrote himself in the remix, is away from his wife and three kids, who fled the invasion. Topolia said he — and the thousands of men who have joined Ukraine's army since the war began — want only one thing: for the war to be over, and to be free once again to dance with the people they love.

Sheeran and the members of Antytila struck up a friendship via social media earlier in the year, and the British singer asked the group if they wanted to collaborate on a remix of "2step," according to Topolia.

The artists released the song on May 2, along with a video that has been viewed more than 1.8 million times on YouTube.

The music video was filmed in three locations — Kyiv, Irpin, and the region of Kharkiv, a focal point of Russia's assault on eastern Ukraine, where three members of Antytila are fighting as part of the 130th battalion of territorial defense.

It opens with a shot of Oleksii Sokolov, a 13-year-old Ukrainian dancer, dancing alone, as Sheeran sings "2step." Sokolov is shown onstage at the Lesya Ukrainka National Academic Theater in Kyiv, and amid the rubble of the Palace of Culture in Irpin.

The video then follows a girl and her mother as they flee their home in a car after a bombing. The girl, Ukrainian ballroom dancer Yaroslava Nefedova, dances alone in a field on the side of a road, as her mother watches and Topolia is shown in military fatigues, singing a new verse of "2step" in Ukrainian.

"The sirens interrupted our sleep, grabbed in two suitcases everything that is in the past, then go go, you're behind the wheel, into the unknown," sings Topolia.

The verse and scenes in the video tell the story of Topolia and his family on the first day of Russia's invasion of Ukraine.

He remembers waking up at home in Kyiv to the sounds of sirens and explosions. His wife and children left in their car and traveled "almost 14 hours" to reach the region of Lviv, in western Ukraine.

"I waved to them, kissed them and stayed in Kyiv to carry out my duty as a citizen by defending the state," said Topolia, who volunteered for the Ukrainian army as a paramedic. "I was only left with memories of them, the smell of my beloved wife's Dior and the smell of smoke that was already approaching through the capital."

Topolia says he wrote the Ukrainian lyrics because he wanted to share the "pain" of this separation — and because he knew he was not the only one experiencing it.

"Millions of Ukrainian men did the same, sending their children and women either to western Ukraine or abroad, and staying here to fight the Russian occupiers," he said. "This is why the story in the lyrics sung by me is not only my story, it is the story of many Ukrainians."

The singer filmed his part of the video on an open road in Kharkiv, near his battalion's positions, with the help of his fellow band members and a GoPro camera. They "stopped for 10 or 15 minutes to record this video" and then left, he said, "because it was dangerous" to stay too long in an exposed spot.

In the Ukrainian verse, Topolia sings to the person he loves about how the war has interrupted their dreams. "Wait for me when all this passes," he says.

Topolia's wife, Ukrainian singer Olena Topolia, and their three children are in the United States. He says he will see them "after the war ends," and calls on Western countries to donate weapons to Ukraine to end the war.

The members of Antytila told Sheeran in March via social media that they wanted to perform remotely at ITV's Concert for Ukraine in Birmingham, a celebrity-studded event to raise funds for humanitarian aid for Ukraine. The organizers of the charity concert said the band couldn't perform because they were members of Ukraine's military, and the event was focused on the humanitarian cost of the conflict.

After that, Topolia says Sheeran's team got in contact with his band and proposed a collaborative remix of "2step," whose proceeds would fund humanitarian operations in Ukraine.

For the next year, Sheeran and Antytila will also be donating the royalties and Warner Music's proceeds from streams of the music video to Music Saves UA, a nonprofit created by the Ukrainian Associated of Music Events to distribute humanitarian aid in war-torn parts of Ukraine.

According to a news release, Sheeran's ties to Ukraine began when he filmed the original music video for "2step" in Kyiv before Russia's invasion.

"I filmed the video for 2step in the city of Kyiv, Ukraine before the devastating acts of violence started to take place," Sheeran said in the release. "Ukraine is a proud and resilient country and I'm grateful to have had the chance to film my video there. I stand with Ukraine and will be donating my record royalties from YouTube streams of the video to the [Disasters Emergency Committee's] Ukraine Humanitarian Appeal."

The Washington Post's Annabelle Chapman in Paris contributed to this report.