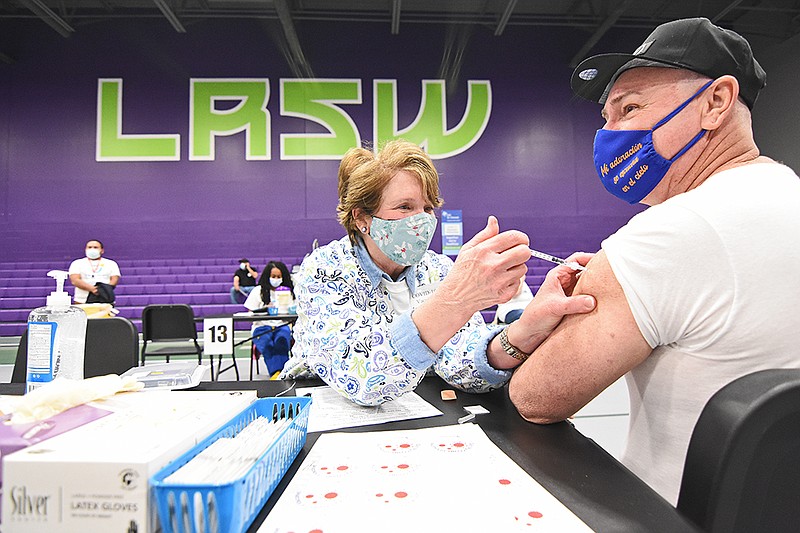 Arkansas' count of coronavirus cases rose Tuesday by 259, the second-largest daily increase since March, while the number of people hospitalized in the state with the virus rose for the second day in a row.

The state's death toll from the virus, as tracked by the Arkansas Department of Health, remained at 11,409, with no new deaths reported on Tuesday.

Continuing an uptick that began a few days after Easter, the increase in cases on Tuesday was more than four times as large as the one a day earlier and almost twice the size of the one the previous Tuesday.

It was the biggest one-day jump since Thursday, when the count rose by 279.

One reason, he said, appears to be BA.2.12.1, a strain of the omicron variant that is thought to be more transmissible than its predecessors.

According to U.S. Centers for Disease Control and Prevention estimates updated Tuesday, BA.2.12.1 accounted for 42.6% of cases nationwide last week, up from 33% a week earlier.

Cima said he expects the uptick in Arkansas' new cases to continue "for the time being."

"We look to what's going on in other places that have been dealing with this upward trend for a little bit longer than us, and those places really aren't showing any signs of slowing down," he said.

In states where new cases have been on the rise, he added, the impact on hospitalizations so far as been "fairly minimal by comparison to where they've been previously."

"Any time you see an appreciable increases in cases, you expect to see some kind of increase in hospitalizations," Cima said.

"That is happening, but not at the levels we've seen before."

After dipping slightly on Monday, the average daily increase in Arkansas' case count over a rolling seven-day period rose Tuesday to 194, its highest level since the week ending March 28.

With new cases outnumbering recoveries, the number of cases in the state that were considered active grew by 92, to 2,056.

The total as of Tuesday was still down from a recent high of 2,062 cases that were active as of Sunday, but it was up by more than 500 compared with the total a week earlier.

The number of covid-19 patients in the state's hospitals rose by five, to 64, the largest number since April 13.

After falling by one a day earlier, the number of the state's virus patients who were on ventilators rose back up by one, to 12.

Growing for the second day in a row, the number who were in intensive care rose by four, to 23.

At its hospitals in Little Rock and Springdale, Arkansas Children's had three covid-19 patients on Tuesday, which was down from four as of Thursday, spokeswoman Hilary DeMillo said.

Excluding Jan. 29 and Jan. 30, when the state didn't release numbers as it switched to a new data system, Tuesday was the seventh day this year that the Health Department didn't report a change in the state's covid-19 death toll.

The average number of deaths reported each day over a rolling seven-day period remained at about 2, which is as low it's gotten this year and just above the low of one a day it reached last year, in early June 2021.

The Health Department's tally of vaccine doses that had been administered rose by 2,238, which was larger by 630 than the daily increase a week earlier.

The most recent increase included 586 doses for people receiving the vaccine for the first time, which was up by 248 compared with the increase in first doses a week earlier.

After dipping slightly on Monday, the average number of total doses administered each day over a rolling seven-day period rose Tuesday to 1,304, which was still down from an average of more than 1,900 a day the previous week.

The average for first doses rose to 299.

According to the CDC, the percentage of Arkansans who had received at least one dose remained Tuesday at 66.8%, and the percentage who had been fully vaccinated remained at 54.5%.

The percentage of those fully vaccinated who had received a booster dose remained at 39.8%.

In the percentage who were fully vaccinated, it fell from being roughly tied with Idaho for 46th to 47th, ahead of only Louisiana, Mississippi, Alabama and Wyoming.

Nationally, 77.8% of people had received at least one dose, and 66.3% were fully vaccinated.

Of the fully vaccinated population nationally, 46% had received a booster dose.