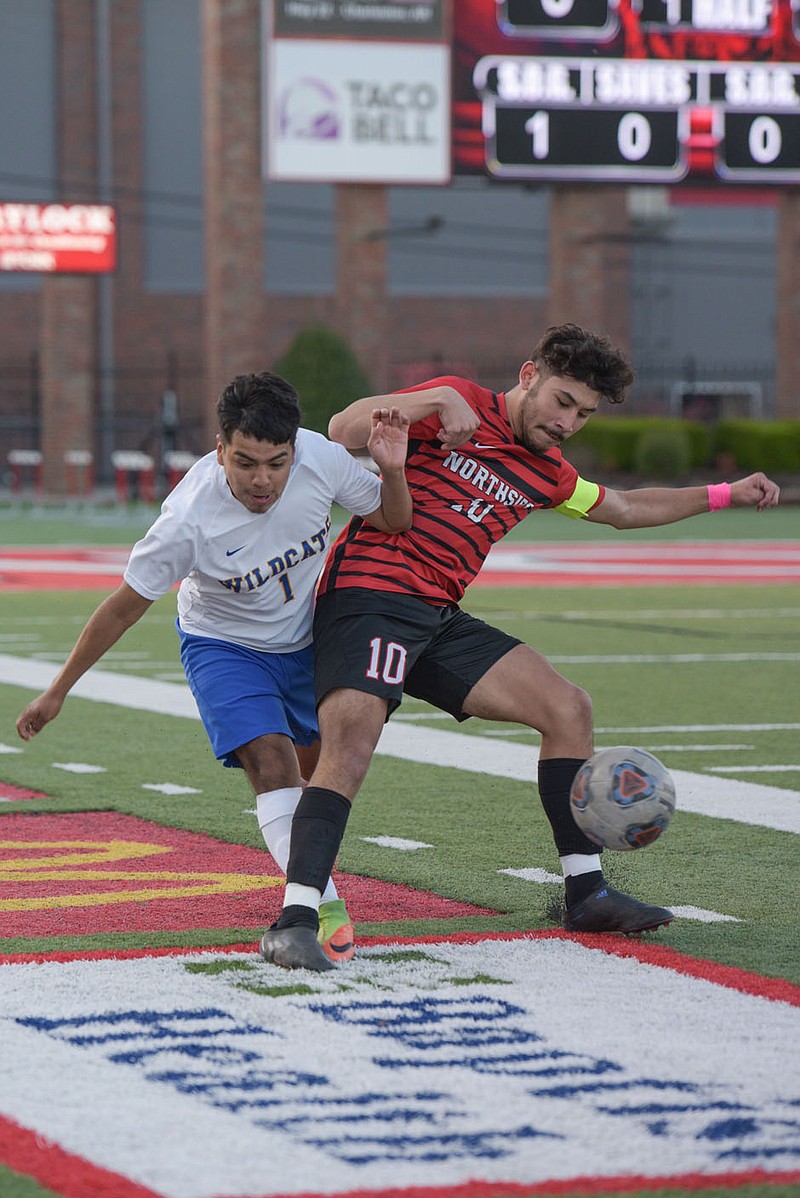 Cesar Perez (10) of Fort Smith Northside battles Osiel Rodriguez of North Little Rock for possession on Tuesday, April 5, 2022, during the first half of the Grizzlies' 3-1 win at Mayo-Thompson Stadium in Fort Smith. Perez, Christian Franco and Cesar Olvera each scored one goal for Northside. Visit nwaonline.com/220406Daily/ for today's photo gallery. (NWA Democrat-Gazette/Hank Layton)

FORT SMITH -- It has been a common occurrence all year for Fort Smith Northside soccer fans to see the No. 10 jersey of junior forward Cesar Perez racing down the field to create huge moments for the Grizzlies.

Numbers on athletic jerseys serve many purposes. It makes players easily identifiable, but for Perez this season, switching back to his beloved number he has worn since he was a 5-year-old, it means much more.

It was the number that his father, Cesar Perez Sr., always liked him to wear. Tragically, Perez's father passed away in June from a car crash. After wearing No. 4 last year and the No. 10 number becoming available, Perez claimed it and has put on a show ever since in honor of his father.

"He always wanted me to wear this number," Perez said. "I'm working hard, playing and doing it all for him this season. It has motivated me so much to put together a special season for him. I want to make him proud."

Perez, a three-year starter, is a dynamic player that plays at a fast pace and can create opportunities using either of his feet or his head. He can thank his dad for that. Growing up, he learned a lot about soccer from him. A former player of the game, Perez Sr. passed his passion down to his son. Many qualities of Perez's game can be directly attributed to dad.

"I learned so much from him," said Perez, who is nicknamed Junior. "I'm right-footed, but my dad played with his left. He taught me growing up to use my left foot as well. I can use them both because of him. I couldn't do it without him."

Northside Coach Mauricio Maciel has admired the way Perez, who is a team captain, has handled the devastating loss to him and his family. Maciel sadly knows too what it is like to lose a father.

"You have to admire that from him," Maciel said. "We have been there to support him. He absolutely loved his father and he is overcoming that at his young age. I lost my dad two years ago as well. That is something we share. It isn't easy for a 44-year-old much less a 17-year-old. I really respect him for that."

Perez has been a key attacking option for Northside. But he is quick to credit fellow players around him in Bryan Morales, Jose Perez Rivera, Andy Moreno and Jayci Barroso, as well as the defense behind him.

Senior captain and defender Jonathan Resendiz has grown up around Perez playing soccer since they both were little. He credits Perez as a team leader, helping out upperclassmen and underclassmen alike. Resendiz has seen Perez take his game to another level, and the show only is getting better.

"I have a feeling he is going to score before he even does," Resendiz said with a laugh. "I have the best view back here as a defender. I can see when he is making his moves. I've seen it since we were growing up together and in practice. It never gets old watching him play."

When Perez puts on his No. 10 jersey on game day, there is no doubt he recalls memories of his dad. The next time he puts on that uniform will be Friday at noon in the second round of the Class 6A State Tournament at Cabot. Northside will face the winner of the Springdale-North Little Rock first-round game.

The Grizzlies couldn't be entering the playoffs in a better position. Northside is unbeaten in its past seven games, which includes a come-from-behind 5-3 victory over previously unbeaten and top-seeded Conway.

Perez is taking his game to another level as well down the stretch. He has scored at least three goals in four of the past seven games. Maciel knows what a state tournament winning team looks like. He coached the Grizzlies to state titles in 2013 and in 2018. He has a feeling this team has all the tools for a special run.

"I like the way these guys are playing right now," Maciel said. "They have gotten a lot better as the season has progressed. This is relatively a young team with just three seniors. They have been rising to the occasion. This team can surprise a bunch of people if they can continue to play together like they have. They can play against anybody in the state."