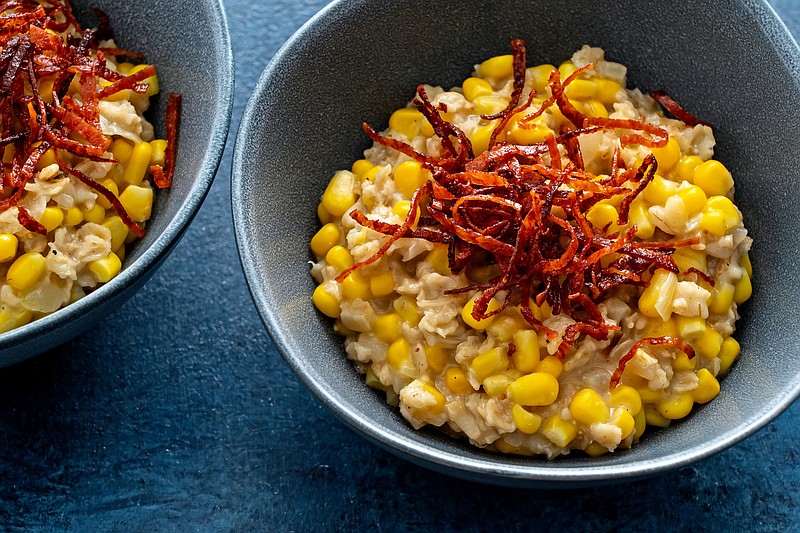 Oatmeal is one of my favorite foods. My mother says she ate a lot of it while pregnant with me, which superstition would dictate is the reason for my affinity.

When I was a kid, packets of instant oats in flavors such as apple cinnamon or peaches and cream were a weekday morning staple before I rushed off to catch the school bus. As an adult, I like to make a pot of rolled or steel cut oats and serve it simply, adorned with butter and brown sugar. However, oats need not be confined to sweet dishes.

Like any other grain, oats can be used in a plethora of savory dishes, too, and this pantry-friendly recipe for corn and cheese oatmeal is just one example of that range.

This recipe starts with frying thin strips of pepperoni until crisp, which does two things: It gives you a playful garnish full of texture and spice, and leaves you with pepperoni-infused oil to help flavor the rest of the dish. These crispy bits are like the best parts of a pepperoni pizza and I would eat them by the handful if my doctor said it was OK, but you can omit them if you don't eat meat.

Toast the oats in the same skillet (after softening an onion) until they smell nutty to deepen their flavor. Kernels of corn — either from a can or the freezer — are added for bits of sweetness, and then everything simmers in liquid until the oats are tender. (This recipe calls for water, but feel free to replace some or all of it with beer, wine or stock to lean into this dish's risotto vibes.) Lastly, stir in parmesan to add salty creaminess to this comforting porridge, adding more cheese and black pepper as you see fit if you're a member of the cacio e pepe fan club.

In a medium nonstick skillet over medium heat, heat the olive oil until shimmering. If using, add the pepperoni and fry, stirring regularly, until crispy, 3 to 5 minutes. Transfer the pepperoni to a paper towel-lined dish to drain, leaving the fat in the skillet.

Add the water, increase the heat to medium-high, and bring the mixture to a simmer. Cook, stirring occasionally and adjusting the heat as needed to maintain a simmer, until the oats are tender and most of the water has been absorbed, about 7 minutes. Remove from the heat.

Stir in the cheese until melted and evenly combined. Taste, and season with more salt, pepper and/or cheese, as desired, keeping in mind that the crispy pepperoni, if you're using it, will add salt and spice. Divide the oatmeal among bowls and top with crispy pepperoni, if using.