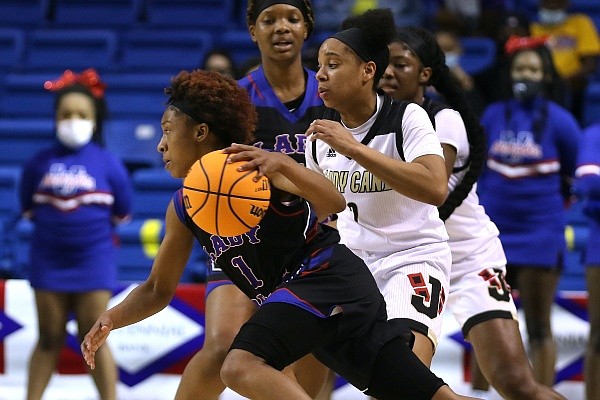 West Memphis' Janiyah Tucker (1) runs the ball past Jonesboro's Ereauna Hardaway (2) during the fourth quarter of Jonesboro's 47-39 win in the Class 5A girls state championship game on Saturday, March 10, 2021, at Bank OZK Arena in Hot Springs.

On Wednesdays we feature an in-state prospect who could be flying under the radar of college coaches. This week's UTR prospect is West Memphis’ Janiyah Tucker.

Stats: 17 points, 5 rebounds and 3 steals per game as a junior

“Some kids, you can teach them skills, but what Janiyah has is God-given talent, and when you combine that with her work ethic then you have a dynamite player. She can shoot the three. We depend on her to bring it up the court and score and she’s a great defender, as well.

"If she gets that ball in the open court, it’s a bucket or a foul nine times out of 10. She has a great midrange game, which is kind of lost in basketball right now. She’s just a stud out there. She can touch the rim. She can jump.”

“She has a heart of a champion. She plays like a lion. I know she’s tired and I’m like, ‘Hey, I know I've got to get you a breather,’ and she’s like, 'I’m good.' She knows how important she is to the team and she wants to be in that game. She has such a great attitude. A kid with that amount of ability sometimes doesn't have the best attitude, but Tuck is just stellar. A college coach is going to enjoy having her.”