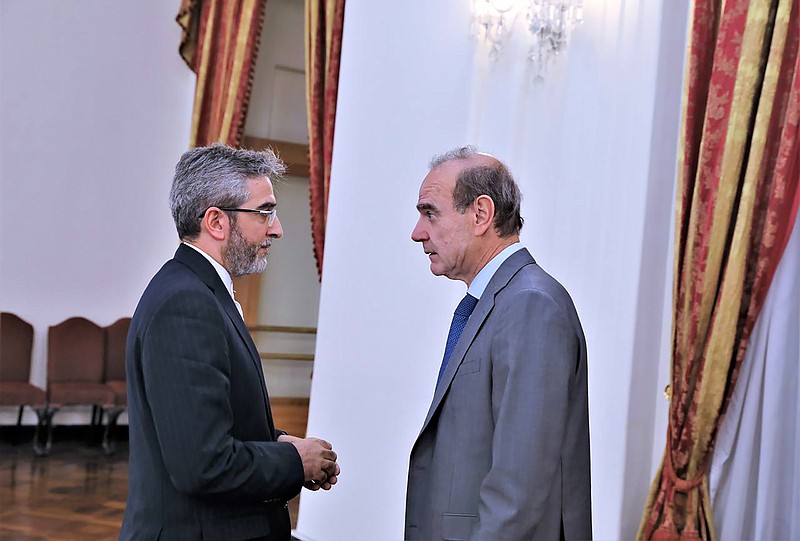 In this picture released by the Iranian Foreign Ministry, Enrique Mora, the European Union coordinator of talks to revive Iran's nuclear accord with world powers, right, speaks with Iran's top nuclear negotiator Ali Bagheri Kani, in Tehran, Iran, Wednesday, May 11, 2022. Mora traveled to Tehran as the bloc makes a last-ditch effort to salvage the tattered deal after a weekslong standstill. (Iranian Foreign Ministry via AP)

Photos surfaced of the EU coordinator of the nuclear talks, Enrique Mora, looking stern as he shook hands with Iranian negotiator Ali Bagheri Kani, who beamed and waved.

The Intelligence Ministry gave scant details about the detained Europeans, saying only that they shared the same nationality, which was not identified, and sought to "take advantage" of the protests springing up in several Iranian provinces as laborers and teachers press for better wages.

The two Europeans are being held on charges of planning to cause "chaos, social disorder, and instability," authorities said.

The provocation came as Tehran vows to execute an imprisoned Swedish researcher later this month -- a case that coincides with a landmark war crimes trial of an Iranian official in Sweden.

And Iran's powerful Revolutionary Guard reportedly shelled Kurdish targets in northern Iraq. The Iraqi Foreign Ministry condemned the strike on "a number of sites" in the region, placing blame on Iran. A local official said the shelling caused no casualties.

Negotiations with the visiting EU coordinator were not obstructed by Tehran's actions. There were no immediate details from Kani's meeting with Mora, who has sought to break the deadlock that has prevailed since talks to revive the nuclear deal paused in late March.

Four years ago, former President Donald Trump pulled the U.S. out of the nuclear deal, which granted Tehran sanctions relief in exchange for curbs on its nuclear program. Talks in Vienna to revive the accord have apparently stalled over an Iranian demand that Washington lift a terrorist designation on the country's paramilitary Revolutionary Guard.

Despite the deadlock, officials say the urgency to close the deal has grown. Iran's nuclear program has rapidly advanced, with its stockpile of enriched uranium at some 7,055 pounds earlier this year, compared to 661 pounds under the nuclear deal.

Some of that uranium has been enriched up to 60% purity -- a short technical step from weapons-grade levels. Iran has stopped the International Atomic Energy Agency from accessing its surveillance camera footage.

"Talks for the lifting of sanctions will be pursued in the right direction with the aim of reaching a good, strong and lasting agreement and observing Iran's red lines," he wrote on Twitter. However, Iran's hard-liners have criticized any concessions on the designation of the Guard.

Despite repeated Iranian claims that a separate but closely linked deal would unfreeze billions of dollars in assets tied up abroad and result in a prisoner swap with America, the State Department has repeatedly said that no such agreement is imminent.

The reported imprisonment of the two Europeans on Wednesday has revived accusations from rights groups that Iran uses foreigners and dual nationals as diplomatic pawns to gain leverage in its negotiations with the West. Tehran denies this.

As Swedish prosecutors reported they would seek life imprisonment for Hamid Nouri over Iranian war crimes allegedly committed during the final phase of the Iran-Iraq War in the 1980s, Iran announced plans to execute Ahmad Reza Jalali, the imprisoned Swedish researcher, and separate reports emerged that authorities arrested a Swedish tourist in the country.

It was not immediately clear whether the Swedish tourist was one of the two Europeans detained Wednesday.

Iran's Intelligence Ministry alleged the two Europeans were "expert" foreign agents hired by the unnamed European country, adding that Iranian authorities had pursued them from the "moment of their arrival" and tracked their attempts to mobilize teachers' protests and assist illegal unions.

Information for this article was contributed by Isabel DeBre, Jon Gambrell and Samya Kullab of The Associated Press. 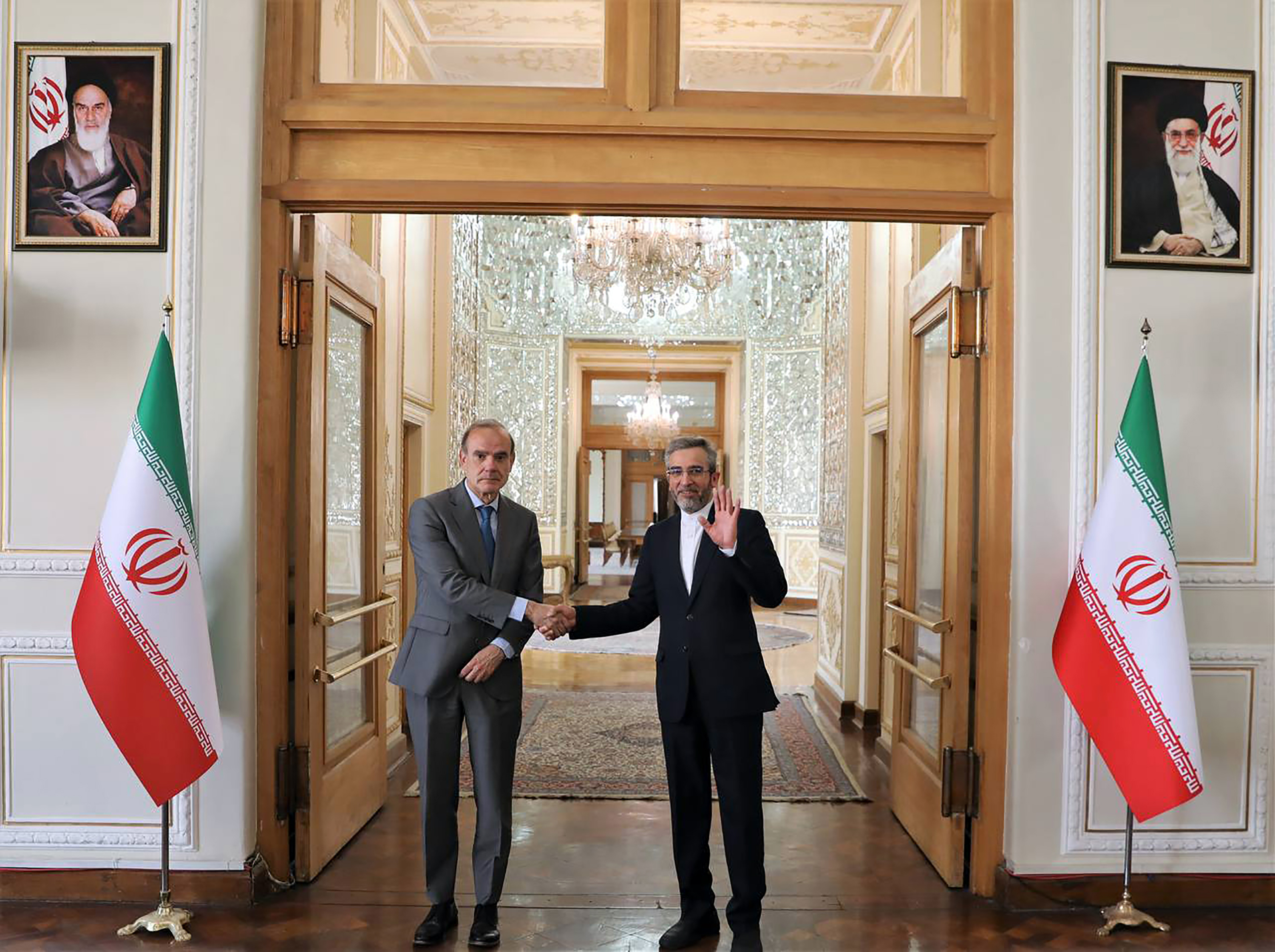 In this photo released by the Iranian Foreign Ministry, Enrique Mora, the European Union coordinator of talks to revive Iran's nuclear accord with world powers, left, shakes hands with Iran's top nuclear negotiator Ali Bagheri Kani, in Tehran, Iran, Wednesday, May 11, 2022. Mora traveled to Tehran as the bloc makes a last-ditch effort to salvage the tattered deal after a weekslong standstill. (Iranian Foreign Ministry via AP)