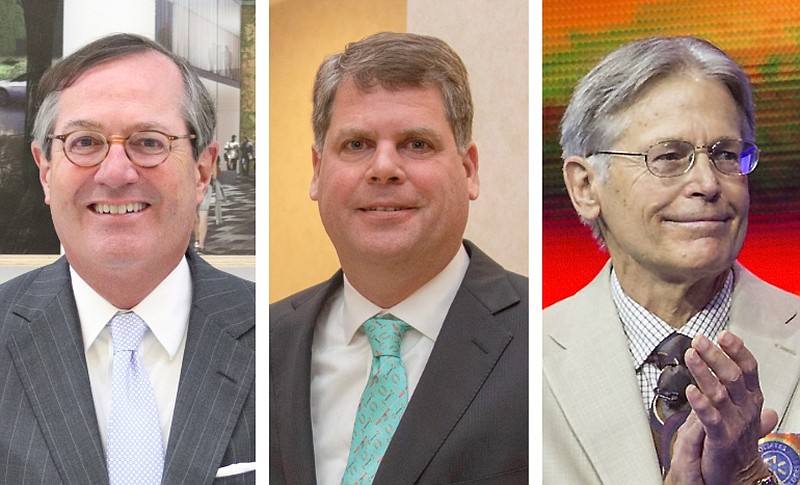 On the eve of the May 24 primaries, the largest contributors to Arkansas' 2022 campaigns include familiar names such as investment banker Warren Stephens and the Arkansas Realtors Association, plus a bounty of out-of-state dollars.

Arkansas' top individual contributors are Stephens and Oaklawn Racing's president, Louis Cella, according to campaign finance disclosures filed with the Arkansas secretary of state's office. Each has disbursed more than $50,000 among favored 2022 candidates, records show.

Then there are the out-of-staters, most without apparent Arkansas ties but who have provided more than $7 million to the campaign of one candidate, Republican gubernatorial hopeful and former Trump White House press secretary Sarah Huckabee Sanders.

Total campaign contributions to Sanders' campaign stand at $14.3 million, according to campaign finance records from Jan. 1, 2021, through March 31, the most recent filings available.

"I'm thankful for the record-breaking support I have received across every county in our state and every state in our nation," Sanders said through a campaign spokesman.

Economic pressures are apparent in some cases, he said. "I'm sure there are certainly donors who may normally give but who are feeling economic uncertainty right now and giving less, or not contributing this cycle."

Ray defines his candidate's fundraising as a success, coming "from every corner of the state and that's a reflection that he is a really strong candidate." About 1% of Griffin's campaign contributions are from outside Arkansas, records show.

Griffin has one opponent in the Republican Primary for attorney general. Leon Jones Jr. of Little Rock reports raising $73,522 in campaign contributions. Democrat Jesse Gibson is the lone opponent for the November General Election, reporting $195,050.

His campaign reports $1.7 million in contributions, with about 57% of those that are itemized by address coming from out-of-state, according to secretary of state records.

Jones communications director Clint Schaff says his campaign isn't surprised that Sanders has raised a lot of out-of-state money with a focus on "culture-war issues made up to stir national conversation."

He says Jones' focus on providing preschools, broadband and jobs in Arkansas has "inspired people across the country."

It's difficult to overstate the size of Sanders' campaign contributions in Arkansas' 2022 election.

The Sanders campaign's $14.3 million accounts for more than $2 of every $5 raised by all candidates for state executive, legislative and judicial offices.

With her work in the Trump White House and as the daughter of former Arkansas Gov. and former presidential candidate Mike Huckabee, Sanders' name recognition attracted out-of-state, as well as in-state, contributors, experts say.

Because important policy is made at the state level, national contributions to state races are "a trend that was developing well before the current election cycle, and Sarah has certainly benefited from it far more than other candidates seeking state office" in Arkansas, said Ouachita Baptist University emeritus political science Prof. Hal Bass, who once taught Sanders.

Sanders has one opponent in the Republican gubernatorial primary, podcaster Doc Washburn. His campaign reports raising $38,355, according to secretary of state records.

Arkansas' third-largest individual donor is Walmart heir and businessman Jim Walton, at $44,100, according to campaign contribution data analyzed by the Democrat-Gazette.

Others include: Shreveport nursing home owner John Ponthie, $22,700; Houston businessman Thomas Friedkin, $21,800; El Dorado oil and timber businessman Madison Murphy, $21,400; and Witt Stephens of Little Rock, CEO of The Stephens Group, $21,200. Most have been large donors in Arkansas elections in the past.

Campaign finance reports also show big donors often team with family members and business associates to multiply contributions to a candidate beyond Arkansas' legal maximum for one donor. This year's max is $2,900 per-candidate, per-election, which often translates into one large donor giving $5,800 toward a candidate's party primary and general election.

Big donors also can contribute to political action committees and political parties that are likely to send still more money to the campaigns of their preferred candidates.

PACs, often built around shared business interests or political convictions, usually donate larger amounts to campaigns overall than even the most generous individuals.

Campaign finance records show other large PAC donors in Arkansas 2022 elections so far, behind the Realtors and nursing home groups, include:

• Nine PACs connected with the Fayetteville group Conduit for Action, $88,450.

One example is the House District 94 campaign of Rep. Jeff Wardlaw, R-Hermitage, which has raised $67,131 so far. Of that, $8,500, or about 13%, has come from four DBH Management Consultants PACs, according to campaign finance records.

Wardlaw faces no Republican Primary opponent. Two candidates have filed to face him in the Democratic Primary in November: Curley Jackson, $0 in contributions, and Andrew Pritt, $10,650.

Some seek access to soon-to-be elected officials to support beliefs they think are important, she and other experts say. Another motivation is investing in a candidate they believe may rise higher in politics.

Responses from the state's two biggest PAC donors indicate they look for candidates friendly to their interests, particularly regarding government regulation of their industries.

The executive director of the nursing home group, Arkansas Health Care Association, wrote that because long-term-care facilities are highly regulated, they have "issues of concern at the legislature at all times, and that has been the case for decades. Because of this, industry members feel a need to exercise their constitutional right to engage in our electoral process."

The Health Care Association chooses to support candidates the same way other industries and voters themselves do, executive director Rachel Bunch wrote. It's based on a candidate's "position on issues of importance, understanding of the healthcare industry, its funding and regulation, and willingness to listen, among other things."

The group also backs candidates who "are committed to strong and fair regulation to promote a healthy housing market and provide protection for homebuyers and sellers."

The biggest individual donor so far to state races, Stephens Inc. chairman and CEO Warren Stephens, declined to talk to the newspaper about his campaign contributions. A spokesman for Oaklawn's Cella did not respond to information requests.

Social incentives include the satisfaction a donor might feel "rubbing shoulders with others at fundraising events," or aspirations for unpaid appointments to prestigious boards and commissions.

Ideological incentives refer to a donor's desire to elect like-minded candidates, who will transform a shared issue into public policy.

"In these polarized times, ideological incentives appear to be on the rise in accounting for donations," Bass said in an email.

Campaign contributions for the 2022 Arkansas elections won't wind down until at least a month after the Nov. 8 general election. Candidates who have campaign debts to repay get more time to try to catch up.

Those with leftover campaign funds have several options, including carrying over money for future campaigns, said UA Fayetteville's Sebold.

The next month, Attorney General Leslie Rutledge, a Republican who had announced for the governor's race more than a year earlier, exited to run for lieutenant governor.

Griffin left the governor's race long before Rutledge. In February 2021, just weeks after Sanders announced her gubernatorial plans, he said he would instead run for Rutledge's current attorney general job.

The Sanders campaign's "stacks of cash were a driver for sure," said U A political science professor Janine Parry. "Even well-known figures in the state had to concede that her candidacy was a juggernaut out of the gate."

Those donations could also indicate a base of support for Sanders in future races.

"She's been talked about as a presidential candidate, maybe not next cycle, but the next. And then there are some who say it could happen next cycle," Sebold said.

CORRECTION: Under Ark. Code Ann. 7-6-203 (g) (1), campaign contributions raised by a candidate in a state race cannot be carried over to directly fund a federal election race. An earlier version of this story didn’t fully describe the limitations placed on how state candidates can use excess campaign contributions. 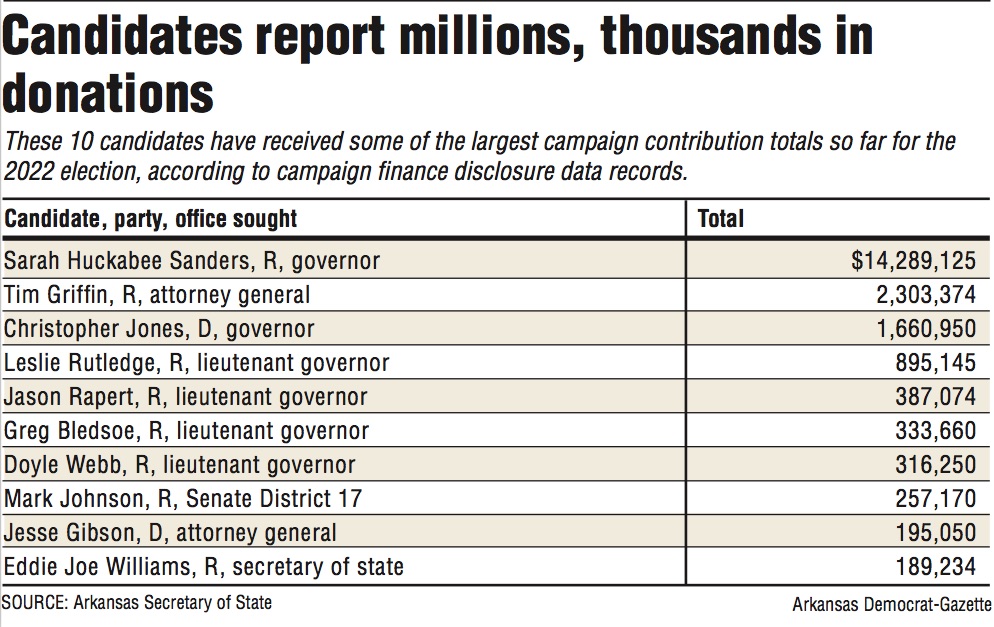 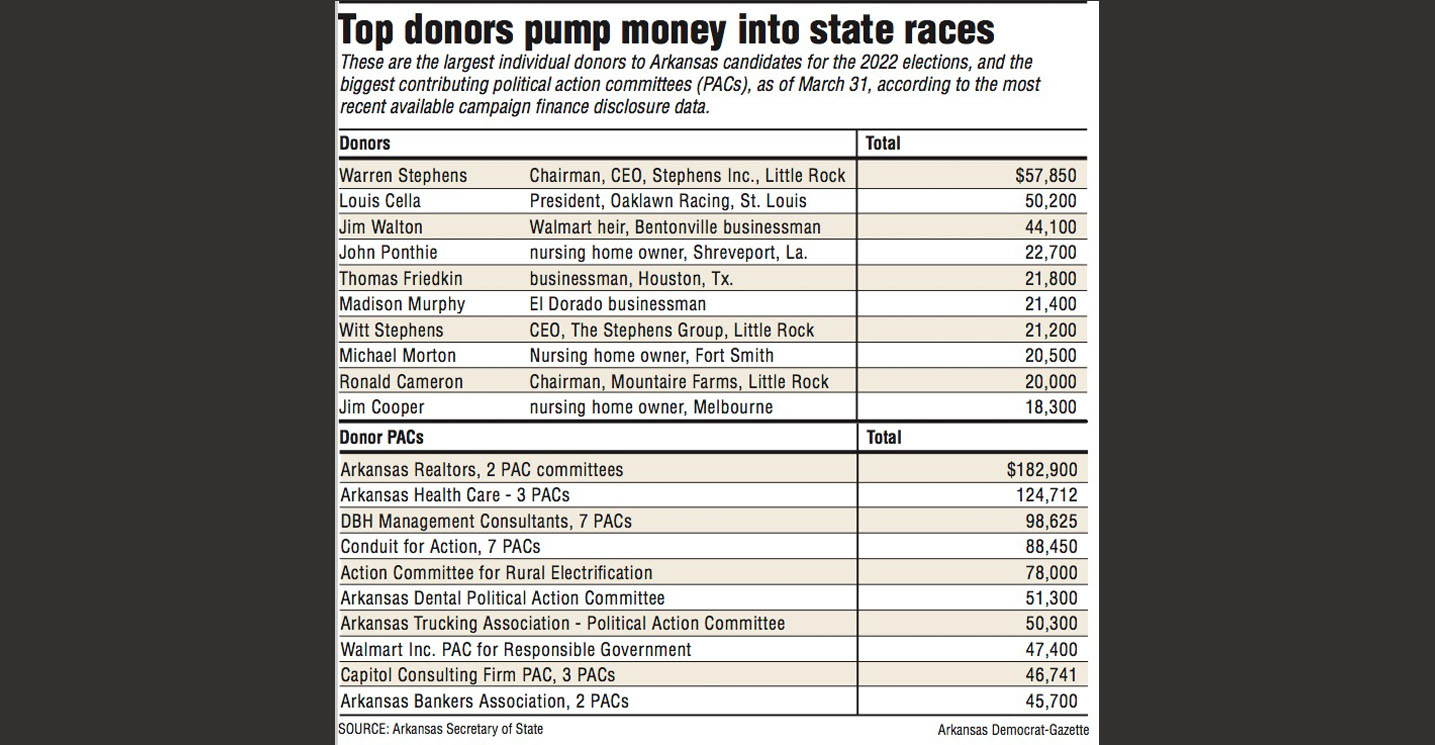