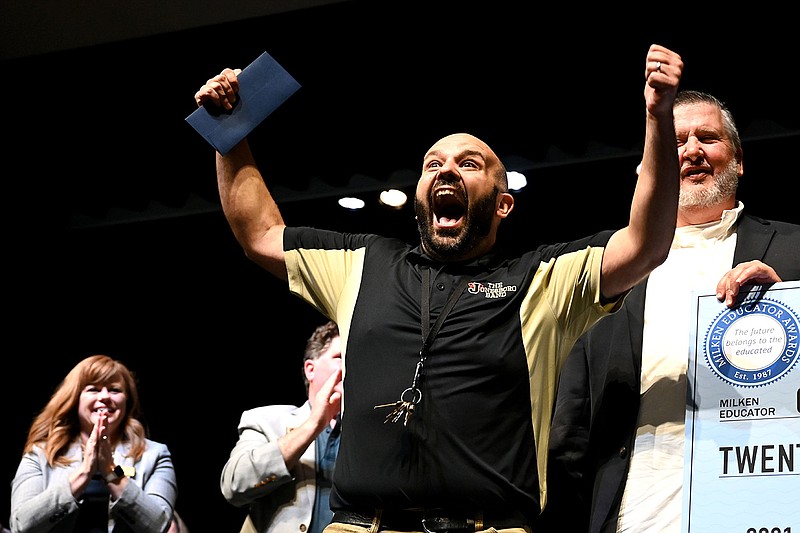 Grant Harbison, the Jonesboro High School band director, celebrates as he walks onto the stage Wednesday to receive the Milken Educator Award of $25,000 during a school assembly at the Academies at Jonesboro High School. More photos at arkansasonline.com/512milken/. (Arkansas Democrat-Gazette/Stephen Swofford)

JONESBORO -- Grant Harbison, band director and supervisor of instrumental music for the the Jonesboro School District, was more than surprised Wednesday with a $25,000 award from the Milken Family Foundation.

"I am absolutely shocked and I am shook," Harbison -- called Harbo by some students -- told the assembly of cheering high-schoolers and co-workers in The Academies of Jonesboro High School's performing arts center.

Just seconds before, Harbison had been operating equipment in the sound booth at the far back of the auditorium.

When Stephanie Bishop, vice president of the Santa Monica, Calif.,-based Milken Family Foundation, explained the award to the audience and then called out Harbison's name, Harbison exited from the booth and headed to the stage, stopping midway to give his waiting wife Leah, an elementary school teacher, an exuberant hug.

He then slapped the extended hands of students he passed in the final steps to the stage. Once on stage, the grinning Harbison pounded his fist against his heart, then raised his arms up high and bounced from foot to foot in a jig that prompted more cheers and a round of the school's fight song played by the band.

"The reaction from the students and your colleagues says it all," Ivy Pfeffer, deputy commissioner for the Arkansas Division of Elementary and Secondary Education, told Harbison.

"We are so proud of you," she said on behalf of the state agency.

Harbison, 36, a Jonesboro native with a family of musicians and educators, is one of two Arkansans and more than 60 people nationally to be selected this year for the "Oscars of the teaching profession."

Kamisha Burlingame, a fourth-grade teacher at Thomas Jefferson Elementary in Bentonville, was presented with the award in April.

As part of the award, the two Arkansans are getting an all-expenses paid trip to the Milken Educator Awards Forum in Los Angeles to network with more than 2,800 fellow winners from the past 35 years.

Harbison told reporters after the announcement that he was completely floored by the award that he knew about but never expected to receive.

"I just teach band and I am not one of the core [academic] people," he said. "I just teach every day and just try to keep the boat going and everything afloat. I try to teach every kid like they are my own kids. Being able to give back to those kids is the biggest reward. That's why we do what we do."

Asked how he might spend the money, he said he would be smart about it and pay some bills but also take his wife on a trip.

The Jonesboro band program, with its different forms -- marching, jazz, symphonic winds, concert winds, drumline -- is the largest and most diverse student group on campus. There are also two junior high bands under the Harbison umbrella.

"We take everyone that we can and try to help raise them up and give them a shot at a better life during school as well as set them up for success after school and make the best citizens for tomorrow," Harbison said.

After graduating from the Jonesboro School District in 2003 -- where his mother was a junior high band director -- Harbison earned a bachelor's degree in music education from Arkansas State University and a master's degree in trumpet performance from the University of North Texas. He taught for four years in the West Memphis School District before taking the job in Jonesboro.

Kenny Hernandez, a senior who has received a band scholarship to the University of Virginia, called Harbison a mentor who cares about each student's well-being beyond the music.

Ethan Bowen, a junior, said Harbison pushes his students to be good people as well as good musicians. He recalled how Harbison reminds students at events to be on their best behavior as they are representing Jonesboro High.

Peyton Stapleton, also a junior, said Harbison teaches not only the music but history on the lives of the creators and how the music came to be.

"That enriches us. We are learning about what happened and how it happened," Stapleton said.

Evan Bowen cited the piece Adoration by Arkansas-native Florence Price as an example of learning from Harbison the back story behind a composer. Price, who lived from 1887 to 1953, was a Black female composer.

"That really helped us play the piece with the emotion it deserved," Stapleton said.

Brad Faught, executive principal of The Academies of Jonesboro High, and others who work with Harbison, highlighted the teacher's energy, passion and dedication to the school, and his being the ultimate team player in a range of projects.

Bishop, the vice president of the Milken Family Foundation, told the audience that teachers do not know they are being considered for the honor. There is no formal application or nomination but a confidential selection process that involves a state panel but leaves the final selection to the Milken foundation.

"At the Milken Foundation, we believe educators have the most important job in our country because they are entrusted with the responsibility of preparing all of you for a bright future," Bishop said.

"Research and our own personal experiences tell us that the single most important education element in determining how much you will learn in school each year is the quality of teachers you encounter. Good teachers make a difference and a lasting impression," Bishop said, complimenting all educators at the Jonesboro campus to a round of applause.

She noted that gold medals, Heisman trophies, Oscars, Emmys and Nobel prizes are awarded in other fields but that the ones who teach those award-winners aren't celebrated.

"We're here to fix that," she said about the Milken Educator Awards, which were started in 1987.