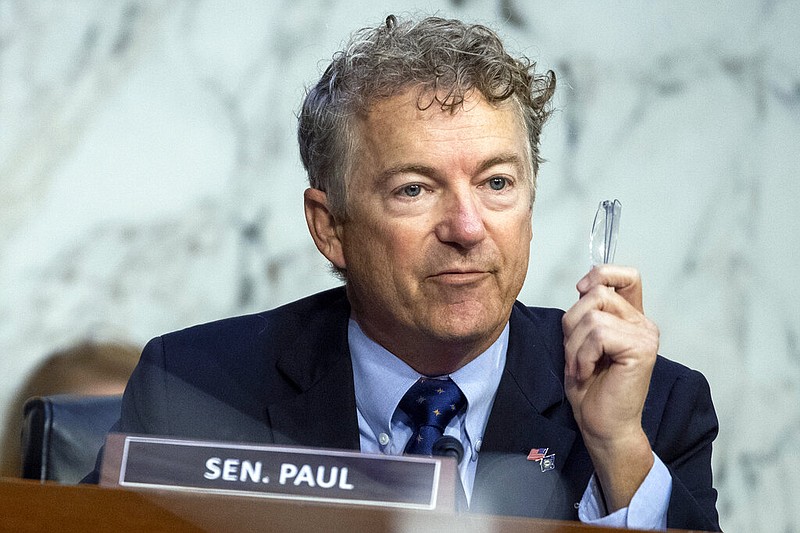 With the Senate poised to debate and vote on a package of military and economic aid, Paul denied leaders the unanimous agreement they needed to proceed. The bipartisan measure, backed by President Joe Biden, underscores U.S. determination to reinforce its support for Ukraine’s outnumbered forces.

It seemed likely that Paul’s objection would delay final Senate action until next week. The plan has been approved overwhelmingly by the House and has strong bipartisan support in the Senate, and passage soon still seems certain.

Paul, a libertarian who often opposes U.S. intervention abroad, said he wanted language inserted into the bill, without a vote, that would have an inspector general scrutinize the new spending. He has a long history of demanding last-minute changes by holding up or threatening to delay bills on the brink of passage.

Democrats opposed his effort. They, along with Senate Minority Leader Mitch McConnell, R-Ky., offered to have a vote on Paul’s language — which would have likely lost — but Paul turned that down. He argued that the added spending was a significant sum that would deepen federal deficits and worsen inflation. Last year’s budget deficit was almost $2.8 trillion.

“We cannot save Ukraine by dooming the U.S. economy,” Paul said.

“It’s clear from the junior senator from Kentucky’s remarks, he doesn’t want to aid Ukraine,” said Senate Majority Leader Charles Schumer, D-N.Y., “All he will accomplish with his actions here today is to delay that aid, not to stop it.”

Underscoring their joint desire to approve the bill immediately, Schumer and McConnell stood nearly side-by-side as they tried pushing the legislation forward.

“They’re only asking for the resources they need to defend themselves against this deranged invasion,” said McConnell. “And they need this help right now.”

Earlier Thursday, McConnell called on “both sides” — meaning Republicans and Democrats — “to help us pass this urgent funding bill today.” His pointed inclusion of his own GOP colleagues came as the only apparent stumbling blocks to quick approval seemed to be demands for new language or votes by a handful of Republicans.

The House voted 368-57 on Tuesday to approve the measure. All Democrats and most Republicans backed it, though every “no” vote came from the GOP. Among Arkansas’ Republican delegation, only Rep. Bruce Westerman voted against the measure.

The bipartisan backing for Ukraine has been partly driven by accounts of Russian atrocities against Ukrainian civilians that have been impossible to ignore. It also reflects strategic concerns about letting Russian President Vladimir Putin seize European territory unanswered as his assault on his neighbor to the west grinds into its 12th week.

“Helping Ukraine is not an instance of mere philanthropy,” McConnell said. “It bears directly on America’s national security and vital interests that Russia’s naked aggression not succeed and carries significant costs.”

Biden administration officials have said they expect the latest aid measure to suffice through September. But with Ukraine taking heavy military and civilian losses and no sign of when the fighting might end, Congress will ultimately face decisions about how much more aid to provide at a time of huge U.S. budget deficits and a risk of recession that could demand added spending at home.

The latest bill, when added to the $13.6 billion Congress approved in March, would push American aid to the region well above $50 billion. For perspective, that would total $6 billion more than the U.S. spent on military and economic aid around the world in 2019, according to the nonpartisan Congressional Research Service.

The push toward passage came as Russia continued blasting Ukrainian forces and cities in southern and eastern portions of the country. Reflecting international concerns prompted by the assault, Finland’s leaders announced their support for joining NATO and Sweden seemed not far behind.

Biden asked Congress for $33 billion two weeks ago. It didn’t take lawmakers long to add $3.4 billion to his requests for both military and humanitarian programs.

The measure includes $6 billion for Ukraine for intelligence, equipment and training for its forces, plus $4 billion in financing to help Kyiv and NATO allies build up their militaries.

There’s $8.7 billion for the Pentagon to rebuild stocks of weapons it has shipped to Ukraine and $3.9 billion for U.S. troops in the region.

The measure also includes $8.8 billion to keep the Kyiv government functioning, more than $5 billion to provide food to countries around the world that rely on Ukrainian crops devastated by the fighting and $900 million to teach English and provide other services to Ukrainian refugees who have moved to the United States.

The biggest hurdle to rapid approval of the assistance was cleared this week when Biden and Democrats dropped their demand to include billions more in the measure to bolster U.S. efforts to counter the coronavirus pandemic. Republicans want separate covid-19 legislation to be a battleground for an election-season fight over immigration that divides Democrats.