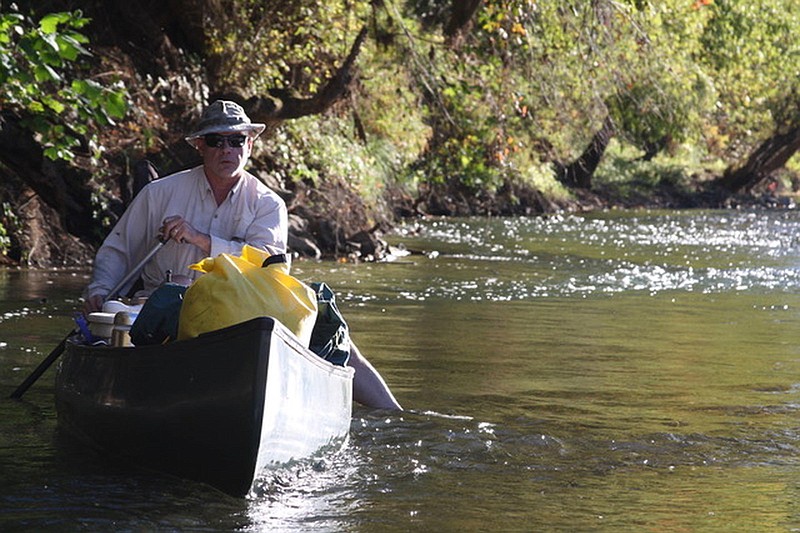 Starting Memorial Day weekend, thousands of canoeists will take to Arkansas streams, many for the first time.

There is probably not a more flammable source of domestic discord than canoeing mishaps. Our rivers are lined with money, cellphones and other valuables because of mishandling a canoe.

Some years ago, on the Buffalo River between Baker Ford and Tyler Bend, I paddled upon a large group of unaffiliated canoeists that concentrated above a serpentine riffle that flowed beneath a cluster of overhanging limbs. I paddled past a pair of elderly gentlemen near the front of the flotilla and said, "It's a lot like a colonoscopy. It's scary at the beginning, but it's all fine at the end."

They laughed, being an age where such a reference was relevant.

"Just do what I do," I said. I entered the rapid, skirted the limbs so that they merely brushed my gunwales, and then beached on a gravel bar at the bottom. I knew this was going to be memorable.

The elderly men entered the run, and the rest of the flotilla fell in behind them. The elderly men slammed into the thickest branch, which promptly tumped the canoe and flung its occupants into the drink. The boat behind them hit the branch and then collided with the overturned canoe, causing it to tump and triggering a massive, multi-canoe pileup.

A veritable fortune in belongings went to the bottom. One couple righted and drained their boat, but tension set it as both blamed the other for the mishap. The man was the helmsman and sat in the back. He was a terse, sarcastic sort who knew precisely how to provoke his companion. She finally got her fill, turned in her seat and swung her paddle at him, missing his face by inches. He fired off a fresh round of taunts, prompting her to bury her head in her hands and sob.

After draining and righting their canoe, the elderly gentlemen paddled close to me.

"I'll tell you one thing, young man," said the helmsman. "That right there tells me I don't want one o' them colon-ock-sopies."

If you're a novice paddler, something like that is very likely to happen. Nothing substitutes for practice, but a short primer can help you avoid the major pitfalls.

Always, the more experienced paddler is the helmsman. He or she sits in the back and determines the boat's course, speed and bearing. The paddler in the front provides power and helps turn the bow.

If the helmsman paddles on the left (port) side of the canoe, it will cause the canoe to bear right, or to starboard. If you paddle on the starboard side, it will push the canoe to the left. The helmsman can use a J-stroke to soften the effect and bring the canoe back toward the paddle.

A J-stroke is a paddling motion that looks like a J. Submerge the paddle ahead, pull it backward parallel with the canoe and then push the paddle outward behind you.

When a radical course correction is necessary, the bow paddler uses a draw stroke. If the bow needs to go hard to starboard, for example, the bow paddler reaches forward, sinks the paddle close to the hull and pushes out. This rapidly pushes the bow the opposite direction of the paddle stroke.

Say you enter a swift, narrow run with the bank on the port side. The deepest water is always against the steep bank. That's also where obstacles like logs and rocks will be.

Do not oversteer and get the boat sideways. Once the bow points to clear water and away from trouble, let the current take control. Paddle lightly to keep the boat on a straight course.

It's also a good idea to slow a canoe before entering swift, narrow water. Do that by paddling backward. It's usually easier to control a boat that's moving slow.

If a serpentine run is fraught with peril, paddle far to the shallow side. It's not as exciting, but that can be a good thing if excitement means certain contact with canoe catchers.

Always look well ahead for potential hazards. If a river is flowing swiftly, you will come upon boulders and root wads surprisingly fast. Paddle away from them well in advance.

Paddling through rock gardens and haystacks is the funnest part of canoeing, but it's also an easy place to tump. Rocks that are barely submerged can tump a canoe in a heartbeat or throw the canoe against another rock or a cluster of rocks. If you get sideways, you will almost certainly get wet.

Rock gardens and haystacks are almost always in places where the river gradient steepens suddenly.

As you approach the top of these features, plot your course long before you enter. Frothing water is always behind a big rock. There might be enough water flowing over it to clear, but you don't know until you get there.

Instead, look for paths of undisturbed water flowing through obstructions and make sure such a path doesn't lead to danger farther in the garden.

If the water is high, you will go over the rocks in a very exciting fashion. If you keep the boat straight, you'll come out at the bottom without incident.

If low water exposes rocks or brings them too close to the surface, it might take some deft, technical paddling, but you can almost always pick your way through. An inexperienced bow paddler can be more of a hindrance in that situation. In that case, the bow paddler should let the experienced helmsman do the work.

Wear your lifejacket in swift water. If a canoe overturns, it can hit an occupant in the head. It's also possible to strike your head against rocks. Wearing a lifejacket will improve the odds of mishaps being benign.