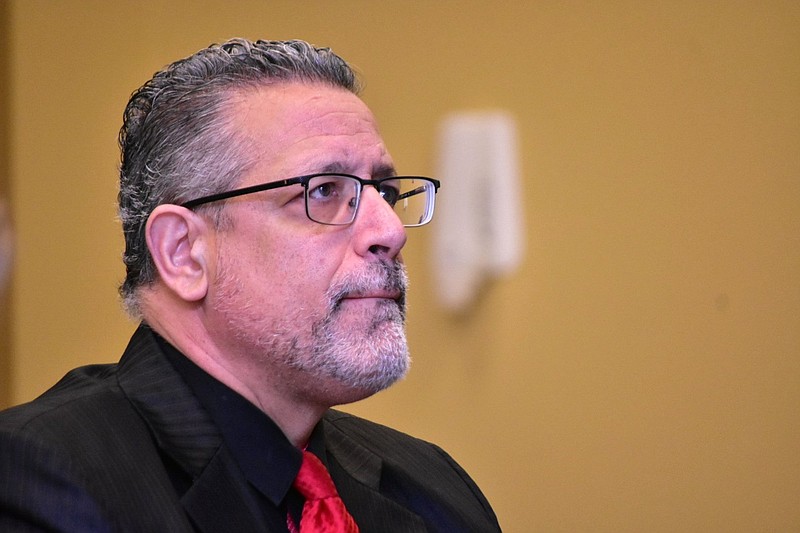 Southeast Arkansas College President Steven Bloomberg looks at a graph on a projector during a board meeting Wednesday. (Pine Bluff Commercial/I.C. Murrell)

College President Steven Bloomberg said the costs for doing business and subscription to software have risen, which necessitated the raise.

For each credit hour, tuition and fees will now be $140, up from $128. The increase is broken down to $4 for tuition, $2 each for technology, infrastructure and college service fees, and $1 each for security and student activities. That means a three-credit hour course will cost $36 more than it did in the fall 2021 semester, and a full-time student taking 12 credit hours will play $144 more per semester.

SEARK last increased tuition in 2017 and the last fee increases were made in 2018, the year Bloomberg became the college's president.

"Part of the reason for that, there are several positions that we are not going to fill," Bloomberg said, clarifying there are eight to 10 support staff positions that will be affected. "They're going to remain open because, right now, we don't have the budget to support that. We're going to be running with the necessary number of faculty and staff to maintain operations, but there will be positions not filled in the coming year."

No faculty positions will be affected, Bloomberg said.

Bloomberg said it is SEARK's practice to acquire land for potential expansion in the future.

SEARK will hold graduation at 7 p.m. Friday at the Pine Bluff Convention Center. The college will award 320 degrees and 96 others will receive certificates of proficiency.

SEARK added a board officer for a two-year cycle to begin July 1, as new trustee Lamont Davis was named secretary. Rebecca Pittillo will replace Rob Cheatwood as chairperson of the board, and Shauwn Howell will serve as vice-chair.