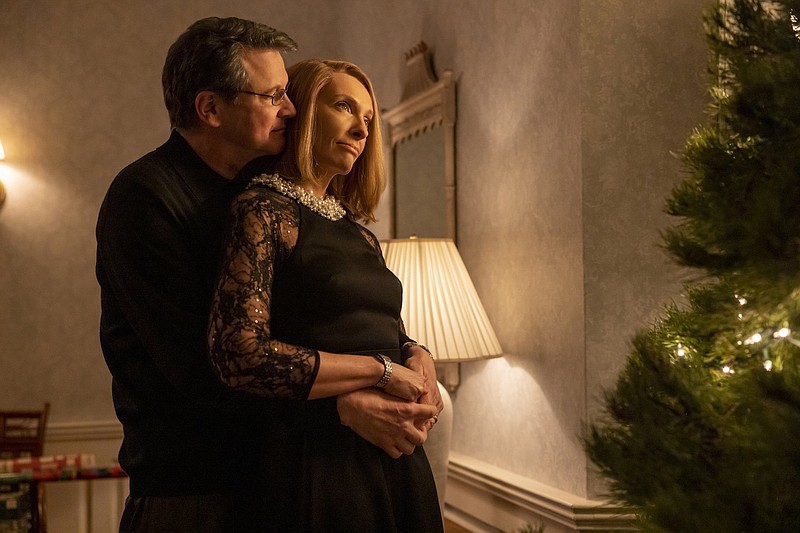 Sometimes it feels like the only stories Hollywood is interested in telling anymore are the ones we already know.

In prestige television today, the go-to source material is true crime, most narrativized already by journalists, podcasters and documentarians. On the whole, these shows are packed with A-listers but middling in quality; save for a few exceptions, they tend to be low on fresh insights and real surprises.

HBO Max's dramatization of "The Staircase" — based on the French docuseries of the same name, which first debuted stateside in 2005 and added updates in 2013 and 2018 — is at least notable for trying something new. In contrast to most of its peers, the well-acted yet droopily paced eight-part miniseries challenges its audience to think more critically about its nonfiction predecessor, the storytelling choices it made and why.

The original "Staircase" doc chronicled — eventually for 16 years — the travails of Michael Peterson, a novelist and failed mayoral candidate in Durham, N.C., accused of killing his wife, Kathleen Peterson. The case fascinated because neither the prosecution nor the defense could offer a fully convincing account of how Kathleen, a corporate executive, ended up dead at the bottom of the stairs in the couple's mansion. Michael could ooze sincerity, but he'd already been exposed as a liar. During his thwarted political career, the former Marine had deceived voters about receiving a Purple Heart in Vietnam.

In interviews, filmmaker Jean-Xavier de Lestrade has said that, with "The Staircase," he had intended to make a film about how the justice system worked for someone white and wealthy, like Michael Peterson. According to the docuseries that resulted, which ended up sympathizing with Michael while never uncovering the truth behind Kathleen's final moments, the system was a catastrophe.

The fictionalized miniseries takes a more intimate, and yet more self-reflective, approach to the case, exploring perspectives, details and at least one outre but compelling theory discarded by de Lestrade, who himself features as a character. (The new drama is probably best experienced as a supplement to the docuseries, rather than a substitute for it.)

Colin Firth and Toni Collette star as empty-nesters Michael and Kathleen, whose blended family of seven include three children in college when the Peterson matriarch is found dead two weeks before Christmas 2001. (None of the five children stem from Michael and Kathleen's union, but are the result of previous marriages and adoptions — a factor that may play a role in the kids' eventual splintering.) Frequent jumps in time help humanize Kathleen, who's embodied with an earthy warmth and reflexive fair-mindedness by Collette. She emerges as fully fleshed, a loving but exhausted woman contending with a restless, demanding husband and a large brood that needs more help than she had hoped they would by this phase of her life.

Glum and plodding — and occasionally grisly — the series gets off to a slow start, even as it posits a primal nightmare scenario: What if you suddenly found your soul mate dead and you were the sole suspect? In Paris, the case catches the attention of two freshly minted Oscar winners on the hunt for their next project, director Jean-Xavier (Vincent Vermignon) and producer Denis (Frank Feys). Upon arriving in Durham, the duo are silently elated that Michael is much more promising as a "character" than they could have hoped. Juliette Binoche also co-stars as a woman whose contributions to the docuseries may be just as crucial as her above-the-line collaborators'.

The dozens of cuts and wounds discovered on Kathleen's body — but especially the seven deep lacerations on her scalp — persuade her sisters (Rosemarie DeWitt and Maria Dizzia), as well as her sole biological daughter, Caitlin (Olivia DeJonge), that Michael is responsible for her death.

It's unfortunate that the first half of the season is so poorly paced, since some viewers might not stick around until the end of the fourth episode. That's when "The Staircase" suggests a dramatic gearshift to something else entirely. It's impossible to know where this sweeter yet potentially troubling development will go (only five episodes were provided to critics), but creators Antonio Campos and Maggie Cohn seem to indicate that the unknowability of this case extends much further than the matter of Michael Peterson's guilt. The twists in the making of the docuseries, it turns out, rival the bizarre swerves in the homicide case itself.