Yelich hits for cycle but Reds get best of Brewers 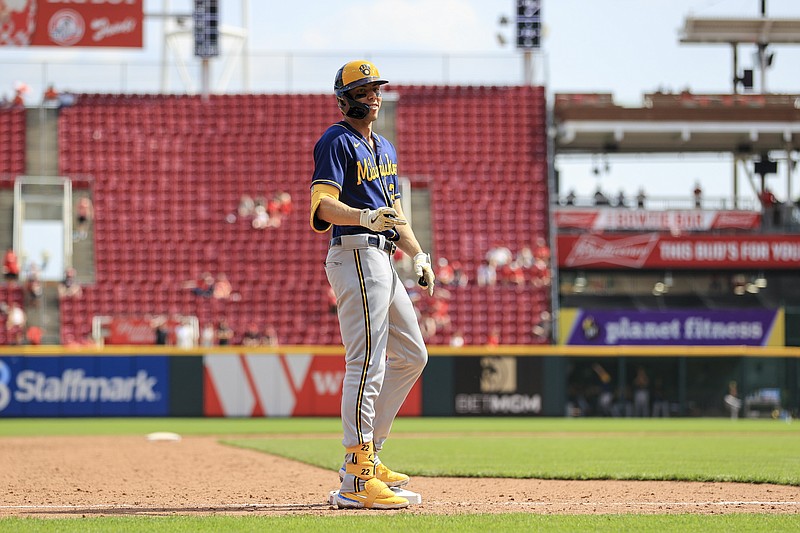 Milwaukee Brewers' Christian Yelich reacts at third base after he completed the cycle by hitting a triple during the ninth inning of a baseball game against the Cincinnati Reds in Cincinnati, Wednesday, May 11, 2022. The Reds won 14-11. (AP Photo/Aaron Doster)

CINCINNATI -- Christian Yelich bolted out of the box, sprinting around the bases and cruising into third standing up for his first triple of the season.

A very well-timed triple, too.

The Milwaukee Brewers star hit for a record-tying third cycle -- amazingly, all of them against Cincinnati. Yelich accomplished the feat Wednesday in a 14-11 loss to the Reds.

"I'd definitely rather win the game," Yelich said. "Weird things happen in baseball. Any time you can hit for a cycle, it's pretty cool. I will try to enjoy it as much as possible."

Yelich tripled during a six-run ninth inning rally. His teammates were well aware of the significance, and they stood on the top row of the dugout to applaud him.

Earlier, Yelich doubled in the first, hit a three-run home run in the third and singled in the fifth.

Late in the 2018 season, Yelich hit for the cycle twice in a span of three weeks against the Reds.

"A lot of things kind of have to happen to hit the cycle," the former National League MVP said. "It is hard enough to get four hits in a major league game and to have the right kind, there's an element of luck. It is still pretty cool."

Tyler Stephenson drove in four runs with a pair of doubles and Colin Moran hit a three-run home run for Cincinnati. The Reds, with the worst record in the majors, won their second consecutive series by topping the NL Central leaders.

"All these teams in the league are good -- you have to keep playing, you have to keep going," Reds Manager David Bell said. "Great day offensively. Not only the hits and the RBI, but just grinding out at-bats, controlling the strike zone, getting guys in base. That created the opportunities."

PIRATES 5, DODGERS 3 Daniel Vogelbach hit a go-ahead home run in the seventh inning, and Pittsburgh took a series from Los Angeles for the first time in nearly five years.

RAYS 4, ANGELS 2 (10) Vidal Brujan got an RBI double leading off the 10th inning for his first hit of the season, and Tampa Bay rebounded from its no-hit loss with a victory over Los Angeles.

BRAVES 5, RED SOX 3 Orlando Arcia hit a two-run home run in the bottom of the ninth inning to give Atlanta a win over Boston.

PHILLIES 4, MARINERS 2 Rhys Hoskins homered for the third consecutive game and provided all of Philadelphia's offense with his second career grand slam in a victory over Seattle.

Print Headline: Yelich hits for cycle but Reds get best of Brewers