5A BASEBALL: Pointers break through late to top Maumelle 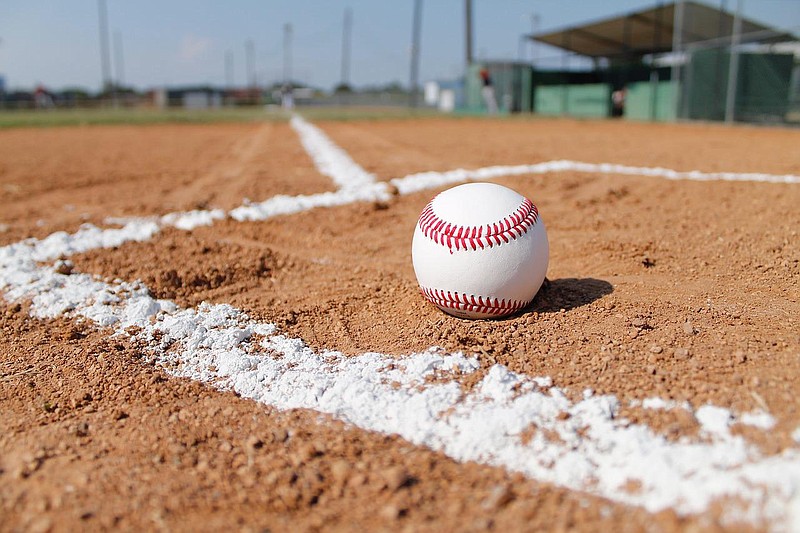 HOT SPRINGS -- The Van Buren Pointers knew they had no usual fourth-seeded opponent in the opening round of the Class 5A state baseball tournament on Thursday.

The Pointers finally tagged Maumelle's ace and scored three runs in the sixth inning to crack a tie for a 4-1 win at Majestic Park in Hot Springs.

Top seed and outright 5A-West champion Van Buren (24-5) will face Jonesboro at 10 a.m. today in the second round in a rematch of last year's state championship game, which the Pointers won 12-1 to win their first state baseball title.

Van Buren mustered little through five innings against Maumelle sophomore Tag Andrews, who was committed to the University of Arkansas prior to his freshman season before he threw a pitch in a varsity game.

"That's a really good team," Van Buren Coach Luke Weatherford said. "Their pitcher did a really good job. Everybody we talked to told us that we're getting a four seed, but we're going to see a really good arm, and if he's throwing strikes and he's on then he's tough to beat. That's what it was."

The Pointers scratched across a run in the third inning with senior shortstop Breckin Waters drilling a double down the left-field line and scoring on a sharp single by Devin Gattis.

Maumelle (17-13) tied it in the fourth inning on a solo homer by Andrews.

Van Buren broke through in the bottom of the sixth.

Eli Gilreath scorched a liner to straight-away center and stretched it to a triple.

"That was huge, leadoff triple," Weatherford said. "He doesn't hit too many triples. I was really contemplating bringing him to third. It was a big hit for sure."

Gilreath had popped out and lined out prior to the triple in his third trip to the plate.

"I changed my approach," Gilreath said. "After I gave up that homer, I was angry. I knew coming out there, I wanted to take hacks and it didn't work out. That last at-bat, I choked it down a little bit and put the ball in play."

Connor Brady drove Gilreath in with a two-strike single up the middle against a drawn-in infield that chased Andrews from the mound. Brady went to second on Jackson Rotert's single, and a walk to Hayden Hurst loaded the bases.

After an out, a walk to Josh Nowotney forced Brady home for a 3-1 lead, and a grounder by Gattis scored Rotert.

"I'm proud of my guys for battling," Weatherford said. "That's what we've done all year. We've played from behind a lot. They're older and they're confident and they believe in themselves. They kept pounding away and having good at-bats, and finally broke through."

Gilreath left after 59 pitches after Andrews' homer to allow him to pitch today or Saturday if necessary. Gattis came in and pitched into the sixth inning before leaving after 30 pitches, leaving him eligible to start today against Jonesboro. Gilreath came back in and closed out the win, getting the final five outs and finished with 89 pitches and five strikeouts.

"With the pitch count rules in high school, unfortunately with the state tournament you have to get a little creative," Weatherford said. "We tried to go Eli for 60 and save him to bring him back on Saturday if we got there. We knew with the tight game, we threw Devin for 30 to try to stretch it out. We had to go back to Eli to finish it out, and he's done for this weekend. We've got a lot of guys that can throw and get guys out."

Maumelle left 11 runners on, including the bases loaded in the second inning, and stranded runners every inning except the sixth inning when they had a runner picked off first.

"One big swing would have broke the game open," Maumelle Coach Chris Foor said. "With a young team like we have, the confidence would have over flowed. We were trying to get the pitch count up. I can't say how proud I am. I wish we would have gotten that big hit, but it wasn't in the cards."

Gage Wood struck out 15 and allowed just two hits and an earned run in leading Batesville to its opening-round victory.

Jack Lanier slugged a three-run homer for Batesville (20-7), the third seed from the 5A-East, as part of a five-run seventh inning.

Austin Jobe homered in the fifth inning for the only run for El Dorado (21-7).

Langdon Moorman went the distance for Sylvan Hills (21-10) to earn the victory, scattering 8 hits, allowing no earned runs and striking out 7.

Russellville (12-19) tied it in the top of the fifth inning on a two-run double by Cade Palmer to score Shane Bucher and Blake Dawson.

Sylvan Hills scored the decisive run in the bottom of the sixth.

Goins singled to open the inning and went to second on John Westerman’s single. After two outs, K.J. Battles was hit by a pitch to load the bases. Cooper West walked to force home Goins for the 3-2 lead.

Evan Ward struck out eight in the complete-game five-inning victory.

Acebo struck out five and tripled home two runs for Jonesboro (24-6). Charlie Dominguez had a pair of doubles, Will Thyer homered, Maddox Morrison had two hits and drove in a run, and Josh Hyneman drove in two runs with a single.