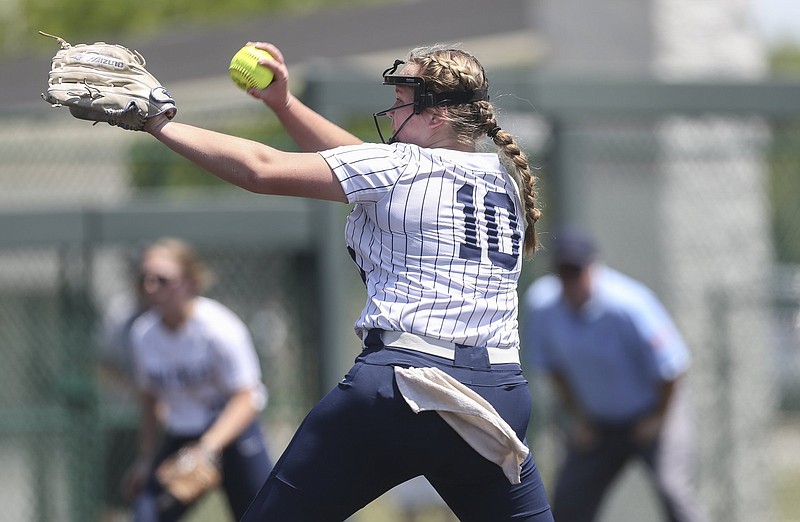 ROGERS -- It was a dream day for Rogers Heritage hosting its first-ever Class 6A state softball tournament game Thursday on its new field.

Elle Riendeau made sure it was a winning day as well for the Lady War Eagles.

Riendeau tossed a shutout behind early run support and helped her own cause with a late home run. That allowed Heritage to pull away for a 4-0 win against Fort Smith Northside in a first-round matchup.

Heritage will will take in Cabot at noon today at Rogers High.

"To host and get a win in the first game out here, it was very gratifying," Heritage Coach Rodney Bowen said. "This group of seniors have worked really hard to get here. It's an awesome feeling right now."

Riendeau allowed 5 hits, 2 walks and struck out 4 in 7 innings. She was staked to a 3-0 lead after two innings. Heritage used a three-hit inning, which included a pair of bunt singles, to build the advantage.

Riendeau started the inning with a walk. Courtesy runner Ava DeFrates went from first to third on a bunt single from Emily Carpenter. Natalee McCarty picked up an RBI with a bunt single and Izzy Ulepich did as well with another single.

It appeared Northside (14-13) would get out of the inning down just 2-0, but the second illegal pitch of the inning was called. Heritage (17-12) took full advantage with McCarty scoring on a wild pitch for a 3-0 edge.

"That big inning was the difference playing a little small ball," Bowen said. "It's always nice to get the momentum early. We did the little things right in that inning. We got them early, but we coasted a little bit. We are glad to get the pitching outing we did to close it out."

With the temperatures hovering around 90 turfed field, Riendeau issued two walks in the sixth inning while having three-ball counts to all four batters she faced. She finished the inning with a strikeout to strand two runners, which was Northside's best chance to score.

"I think the heat got to me a little bit," Riendeau said. "I got a little tired as well. But the preparation all season long got me through it. In between innings, I did as much as I could to come in here and cool off then go out there and do what I can do."

Riendeau extended Heritage's lead to 4-0 in the bottom of the sixth with a deep home run, her fourth of the season, to left field.

Northside got hits from Eden Davis, Bailee Brinkley, Danessa Teague, Erika Johnson and Anna Hale. The season didn't end the way they had hoped, but Northside Coach David Little said it was a fun ride for the bunch.

"I'm very proud of this group of girls," Little said. "We graduated some really good seniors last year and needed to replace four starters. For this group to make it back, they showed a lot of heart and determination."

North Little Rock scored four runs in the bottom of the first inning and advanced past Springdale Har-Ber in the first-round of the 6A state softball tournament.

With one out in the first, Josie Golden reached on an error and Amelia Gassman followed with an RBI double to tie the game at 1-1. Then with two outs, North Little Rock bashed four straight hits including an RBI double by Aubree Kimmons and an RBI triple by Yasmin Sandoval for a 3-1 lead. Sandoval scored on Jaci Kelly's RBI single to make it 4-1.

Gassman and Kimmons had two hits each for the Lady Wildcats (17-9).

Har-Ber (8-12)had nine hits in the game, but could not string together enough to get back in the game.

West bashed 13 hits with Caroline Wilhelm leading the way, going 3-for-4 with a double and triple. Olivis Thornton and Grace Cordell had a double and two RBI each for the Lady Wolverines. Of West's 13 hits, seven were for extra bases.

Sofia King drove in three runs to power the Lady Wampus Cats to a run-rule win.

King helped Conway jump out to a 3-0 lead in the first inning, then the Lady Wampus Cats tacked on three runs in the second, third and fourth innings to advance to the quarterfinals.