Another Razorback plans to enter portal 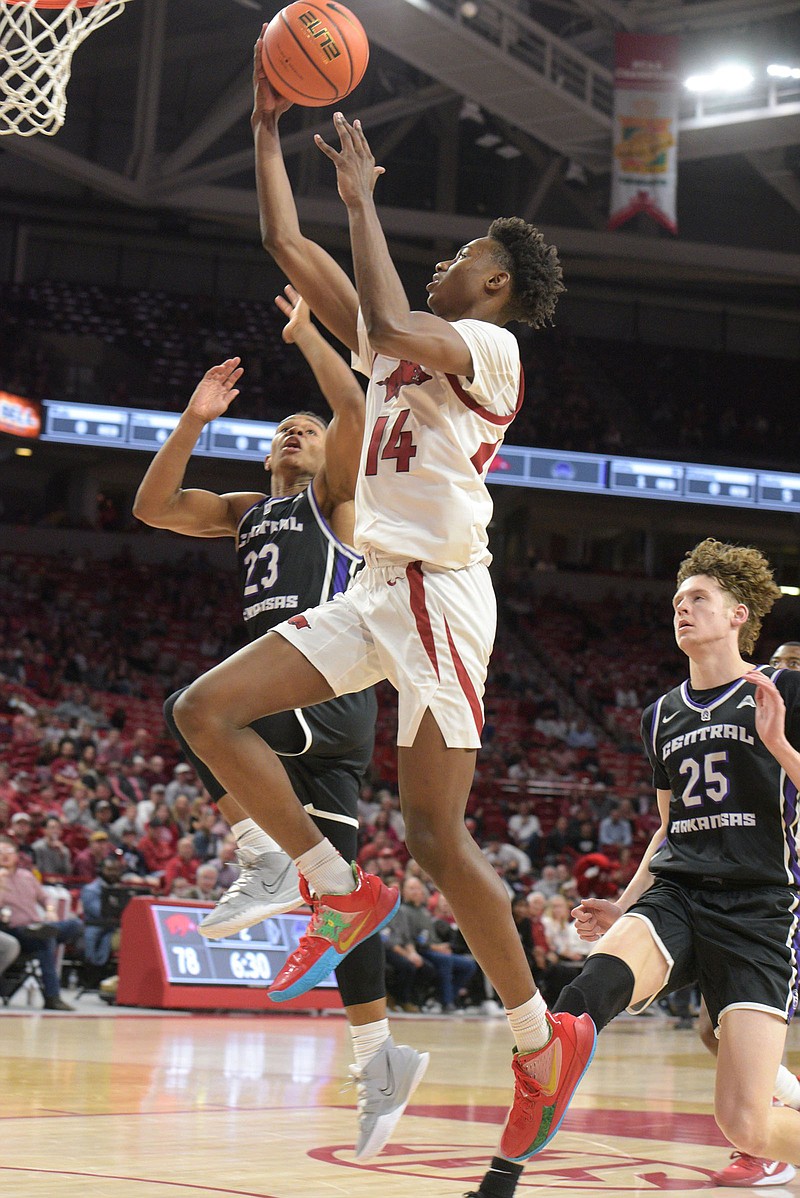 Guard Jaxson Robinson announced Thursday that he has entered the transfer portal after averaging 3.4 points, 1.3 rebounds and 10.2 minutes in 16 games last season for the University of Arkansas. (NWA Democrat-Gazette/Hank Layton)

But Arkansas started 0-3 in the SEC, and when Coach Eric Musselman changed the lineup to put an emphasis on defense and more physical play -- which helped the Razorbacks turn around their season and advance to the NCAA Tournament Elite Eight -- Robinson found himself out of the playing rotation.

Robinson, who played 27 minutes over the final 22 games, announced Friday he has entered the transfer portal.

"To the University of Arkansas, I want to say thank you," Robinson, who averaged 3.4 points, 1.3 rebounds and 10.2 minutes in 16 games, posted on his Twitter account. "Thank you for embracing me and making me feel like one of your own. My experience here is something I will cherish forever."

Robinson, who transferred to Arkansas last year after playing at Texas A&M as a freshman, added on Twitter that he decided it was best for his future to transfer again after speaking with his family.

"Our entire program wishes Jaxson the best luck in this next step of his career," Musselman said in a text message. "He was a big part of our success this season."

Because Robinson is entering the transfer portal after May 1, under NCAA rules he must receive a waiver to be eligible to play next season. If he doesn't get a waiver, he must sit out.

Robinson, who is from Ada, Okla., hasn't redshirted and would still have two seasons of eligibility remaining if he sits out next season.

With Robinson's departure, the Arkansas roster currently is at the NCAA maximum scholarship limit of 13.

That includes All-SEC forward Jaylin Williams, who has entered the NBA Draft, but has not signed with an agent in order to retain his eligibility for a possible return to Arkansas for his junior season.

Williams has been invited to the NBA Scouting Combine, which will be held Monday through Sunday in Chicago. He has until June 1 to withdraw from the draft.

Ricky Council, a 6-6 guard from Wichita State, is in the transfer portal and recently took a recruiting visit to Arkansas.

Robinson is the fourth player from Arkansas' team last season to enter the portal along with Chance Moore, who is transferring to Missouri State; Connor Vanover (Oral Roberts University); and Khalen "KK" Robinson (Texas A&M).