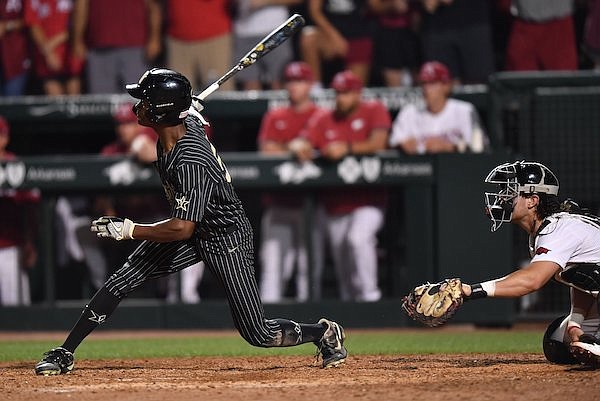 Vanderbilt center fielder Enrique Bradfield connects Friday, May 13, 2022, for a tie-breaking, three-run home run during the 10th inning of play against Arkansas at Baum-Walker Stadium in Fayetteville.

FAYETTEVILLE — Vanderbilt outfielder Enrique Bradfield hit a three-run home run in the top of the 10th inning to give the No. 21 Commodores the go-ahead runs in a 9-6 victory over fourth-ranked Arkansas on Friday at Baum-Walker Stadium.

Bradfield, a left-handed hitter, pulled a 1-2 pitch into the right-field bullpen. It scored two runs after Javier Vaz and Parker Noland walked and doubled with no outs against Arkansas right-handed closer Brady Tygart.

With Arkansas’ loss, Tennessee clinched the SEC regular-season championship. The Razorbacks were the only team within striking distance of the Volunteers in the SEC race.

Arkansas (36-13, 16-9 SEC) saw its lead in the SEC West shrink to one game over Texas A&M with five games to play. The Razorbacks and Commodores are scheduled to play again Saturday at 6:30 p.m.

Vanderbilt (33-15, 13-12 SEC) won despite squandering a 5-0 lead. The Razorbacks hit three home runs to pull within a run, and tied the game 5-5 on Jace Bohrofen’s RBI single in the sixth inning.

The Commodores regained the lead in the top of the seventh on a solo home run by Jack Bulger, but Arkansas tied it again, 6-6, when Robert Moore doubled and advanced on a pair of groundouts by Brady Slavens and Chris Lanzilli.

Moore’s leadoff double in the seventh was the Razorbacks’ final hit. Vanderbilt relief pitcher Thomas Schult did not allow a hit and worked around two walks in three shutout innings.

Vanderbilt scored four runs against Arkansas starter Connor Noland in the second inning. Parker Noland homered to put the Commodores ahead 2-0. Bradfield also had a fielder’s choice groundout in the inning and Davis Diaz singled home a run with two outs.

Parker Noland’s sacrifice fly scored Dominic Keegan in the third inning after Keegan led off with a walk. Connor Noland allowed 5 runs, 6 hits and 3 walks, and struck out 5. He threw 60 of 96 pitches for a strike.

Slavens led off the fourth inning with a solo home run to start Arkansas’ comeback. He and Moore hit back-to-back home runs in the fifth inning to cut Vanderbilt’s lead to 5-4.

Slavens’ two home runs gave him the team lead with 13 this season.

All three Arkansas home runs were against freshman left hander Devin Futrell, who allowed 4 runs, 5 hits and 2 walks in a 5-inning SEC debut. Futrell has been the Commodores’ primary midweek starter.

After the Razorbacks tied the game 5-5, Vandy reliever Nick Maldonado loaded the bases with one out in the sixth. That prompted a pitching change to Nelson Berkwich, who induced an inning-ending double play by Michael Turner.

Turner worked a 10-pitch at-bat against Berkwich. He grounded to the first baseman Keegan, who threw to shortstop Carter Young covering second base, and Young threw back to Keegan to complete the double play.

Bradfield doubled against Arkansas reliever Kole Ramage with one out in the sixth inning and advanced to third with his second stolen base. Evan Taylor struck out Spencer Jones to strand Bradfield at third base.

Both teams stranded eight base runners.

Tygart nearly wiggled out of the jam in the 10th inning. With runners at second and third base and no outs, Tate Kolwyck flied out to right field and Carter Young hit into a fielder’s choice groundout at home plate on a weak bunt.

Bradfield fell behind 0-2 on a pair of foul balls to bring the announced crowd of 11,772 to its feet, but it fell quiet two pitches later when Bradfield had his game-winning swing.