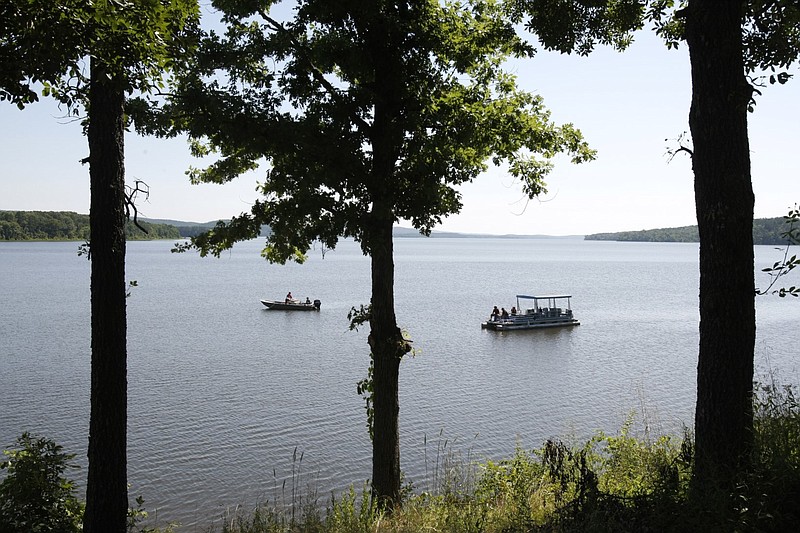 Boaters take water samples from Lake Maumelle in this June 30, 2008 file photo. The crew, which consisted of students from the University of Arkansas at Little Rock as well as personnel from Central Arkansas Water and the U.S. Geological Survey, was checking the water after the announcement of the Central Arkansas Watershed Center of Excellence. (Arkansas Democrat-Gazette/Staton Breidenthal)

Members of the Central Arkansas Water board of commissioners approved purchasing a conservation easement for 136 acres near Lake Maumelle at a meeting on Thursday.

The property owners are Stephen and Rachel Ann McClellan, according to board documents.

Bryan Rupar, a land conservation coordinator with the water utility, delivered a presentation to the board on the purchase.

He reported that the utility currently owns a little over 12,000 acres around Lake Maumelle, plus 589 acres of conservation easements.

The latest acreage includes portions of the Maumelle River and Big Branch Creek. "It's just a really braided section of the river there," Rupar said.

The property is accessed by Cypress Lane off Arkansas 10 and is adjacent to the Ouachita National Forest on its western boundary, he said.

Officials have agreed to split up the easement into three different development zones.

Construction of one single-family dwelling will be allowed in one zone on the property, but there is to be no commercial use in the zone except for the possible rental of the dwelling, Rupar said.

Located near the intersection of Arkansas 10 and Arkansas 9, the property falls in Perry County just outside the Pulaski County-Perry County line, Rupar said.

The $160,000 cost to purchase the easement will be partly funded by the utility's green-bond allocation, Rupar indicated.

The purchase would represent the water utility's fourth conservation easement, Rupar said in response to a question from commissioner Carmen Smith.

Raven Lawson, the utility's watershed protection manager, told commissioners the parameters set for the last three conservation easements have been "very similar -- the first one was a little different."

All of the easements feature zoning within them that is the product of negotiation with each individual landowner, Lawson said, so each is slightly different.

Rupar explained that as part of the agreement, the utility has a right of access that says officials can inspect the property, after giving notice to the owner, to ensure the terms of the easement are being followed.

Last August, water commissioners approved purchasing a 40-acre tract partially located in the watershed from the McClellans for $150,000.

Rupar said there were conversations about putting a conservation easement on the earlier property, but the owners decided it was better to sell it to the utility outright.

The McClellans do not live on the latest property and just purchased it within the past six months, Rupar said.

Additionally, Rupar indicated the purchase would be Central Arkansas Water's first such easement in Perry County.

Earlier this week, Central Arkansas Water spokesman Doug Shackelford provided a response from Lawson via email in which Lawson said the utility has closed on 220 additional acres in the Lake Maumelle watershed so far in 2022.

Some of the acreage was tied to 2021 agenda items and there are agenda items from 2022 the utility has not closed on yet, Lawson noted in her response. Officials only count them once they have closed, she said.