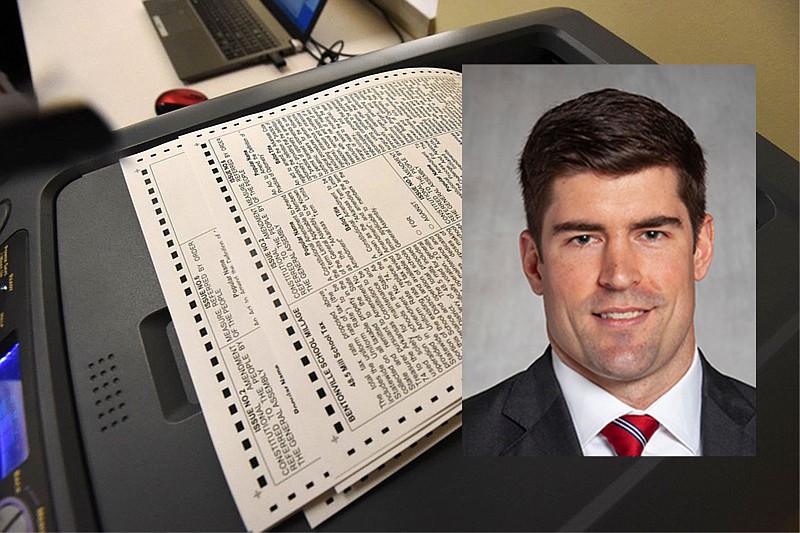 An Arkansas county has corrected the misspelling of a U.S. Senate candidate's first name on its ballots, and a second county plans to have it fixed today, officials said.

Jake Bequette, a Republican challenging incumbent U.S. Sen. John Boozman in the May 24 primary, was misidentified as "Jack" on ballots in Craighead and Phillips counties, officials confirmed this week. Early voting in the primary election began Monday.

Scott Poynter, Bequette's attorney, said Thursday that Bequette's representatives were shown a sample machine where the error appeared to be fixed but "the real machines at the sites in Craighead County have not been fixed to our knowledge and we have not verified the information you received."

According to election officials, the mistake resulted from a proofreading error during the ballot preparation process at the county level. Counties receive a certified list of candidates from the secretary of state's office, then enter it into a portal coded by the state's election vendor.

In a news release Tuesday, Bequette claimed the error amounted to "the establishment political machine" trying to steal the election and called on Thurston and Arkansas Attorney General Leslie Rutledge to launch an investigation.

The Arkansas secretary of state's office became aware of the error in Craighead County on April 28 and in Phillips County on May 6. Thurston expressed disappointment that Craighead County had failed to correct the error before early voting got under way and said the county would have had ample time to do so.

Kimberly Dale, attorney for the Craighead County Election Commission, said Thursday that commissioners had sought advice from the state Board of Election Commissioners when they found out about the mistake and held a public meeting as required by law. The county did not have the updated software it needed to make the correction ahead of early voting, and had posted signs with the correct spelling of Bequette's name at polling sites, she said.

Bequette is one of three Republican candidates seeking to oust Boozman, along with Heath Loftis and Jan Morgan.