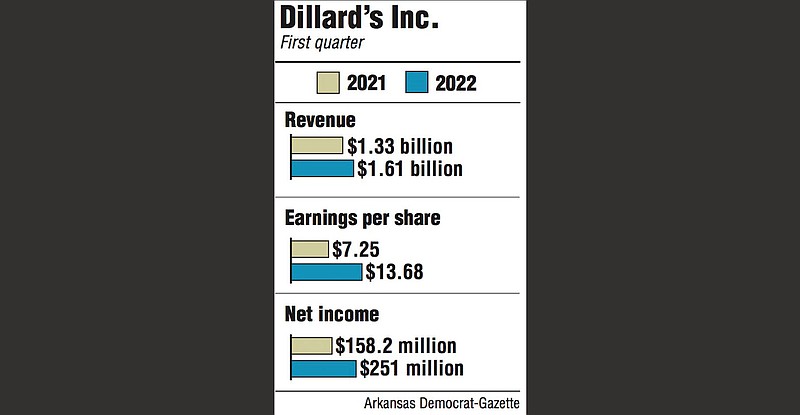 The results far surpassed analysts' average earnings estimate of $6.74 per share. Net income included an after-tax gain of $5.6 million related to the sale of a store property.

Total retail sales, which exclude CDI, grew 22% to $1.58 billion. The apparel categories across the board, including men's accessories, led Dillard's sales performance.

Chief Executive Officer William Dillard II said in the earnings report that customers responded well to the stores' merchandise in the first quarter, producing a 23% increase in sales at stores open at least a year. These sales, also called same-store sales, are considered a key indicator of a retailer's health.

The chain didn't report same-store sales in last year's first quarter since so many of its stores were temporarily closed the previous year because of the pandemic.

The retailer reported cash flow from operations of $365.2 million, compared with $302.4 million in last year's first quarter. Dillard's ended the quarter with $862.2 million in cash, up 40% from last year's $616 million.

Dillard's bought $185 million in stock during the quarter, at an average price of $253.7 per share under its share repurchase program.