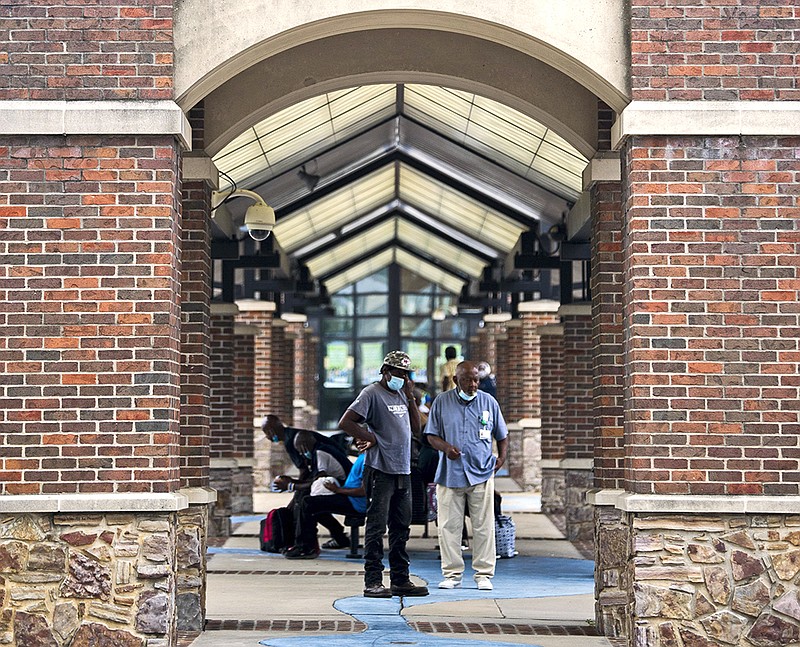 An agreement between Jacksonville and Rock Region Metro to provide on-demand micro-transit service in the city isn't the same deal that the Pulaski County transit agency's former chief executive officer promised last year, according to a Jacksonville City Council member.

"I thought we should have asked more questions," said Council Member Brian Blevins. "I got outvoted. This is one of the worst deals I've seen us get into."

Former CEO Charles Frazier, in a presentation seeking to persuade city officials to offer the service, said it would cost users as little as $1.35 per ride, include service to McCain Mall in North Little Rock as a point of interest and provide rides free for six to eight months to get residents comfortable with the concept. Frazier left the agency in December, 10 days after the agreement was signed.

None of those items were included in the final agreement that calls for providing the service to Jacksonville for three years starting at $228,624 in the first year.

But Green said the agency staff will meet with city officials to look at implementing a point of interest at McCain Mall as well as offering a fare-free ride launch to "build interest," which already has been discussed with Jacksonville Mayor Bob Johnson.

Rock Region has been pitching the on-demand service to smaller cities, including Jacksonville and Sherwood, after the Pulaski County transit agency eliminated express service to both communities because it didn't attract enough ridership. Each city contributed about $84,000 a year for the express route.

On-demand, micro-transit service -- akin to a ride-hailing company -- uses van-like vehicles instead of regular buses to pick up passengers at their homes in a specified service area or zone after the passengers call or arrange to be picked up via an app. They are then taken to a destination within the zone, such as a doctor's office, a drugstore or a grocery store.

More than one rider may share a vehicle, but Rock Region officials say they like to keep the zone a manageable size to allow riders to be picked up in 15 minutes or less.

Blevins voted against the proposal when it came to the council last year, and nothing he has seen since has changed his mind. He said he is particularly perturbed that the cost is a quarter of a million dollars for "one guy and a van."

"It blows my mind," he said in an interview.

One van would circulate throughout the zone for 12 hours per day six days per week.

The city is committed to the concept because it would be costly to back out of the agreement, especially in the first year.

Under the agreement, rides would cost $2, not the $1.35 Blevins said he thought it would cost. He only learned that from watching Rock Region officials make the pitch to a meeting of the Sherwood City Council last month. The council tabled it until this month, according to April Broderick, a Sherwood council member.

The $2 fare will remain, according to Green.

"The $2 per person per trip cost was set for all our pending and proposed city-wide microtransit zones (Conway, Jacksonville, Sherwood) after a fare analysis conducted by our professional transit planning firm," she said in an email. "It is a very reasonable fare compared to other agencies' microtransit fares."

Green noted the trips within the Conway, Jacksonville and Sherwood zones likely would be longer than the existing Little Rock zones.

She also wouldn't rule out a fare increase in Little Rock and North Little Rock, given that fares haven't increased since 2009.

Green said it was the agency's "professional recommendation ... [to] not add a 'point of interest' for McCain Mall at this stage, as it would degrade the overall total wait and travel times for all riders and possibly only serve a potentially secondary interest group's most basic needs, rather than serving the needs of Jacksonville residents to get to Jacksonville-based health appointments, grocery stores and other destinations."

But Green reviewed a copy of the August presentation that Frazier gave.

"Obviously, now that I have seen the August presentation, we will be planning to update the city council on all of these concerns, including the trade offs of having a point of interest at McCain Mall," she said. "We are not foisting a hard decision on the city either way on this item, but it's best practice as the transit experts in the room to let everyone involved understand how much the quality of service will be affected, should a point of interest at McCain Mall be implemented."

Green also conceded that fare-free rides would be part of the introduction of the new service.

"I was only made aware of the August presentation when I spoke with Councilman Blevins Monday, so I could not tell you why this was not part of the agreement," she said. "I had initially thought the councilman was referring to the city not paying fees during the planning period before actual service launch. Now that I have seen the August meeting video, I see that 6-8 months of fare-free rides for riders was suggested. Our team feels we can set an initial time period of fare-free rides to build interest, and we have discussed that with the mayor."