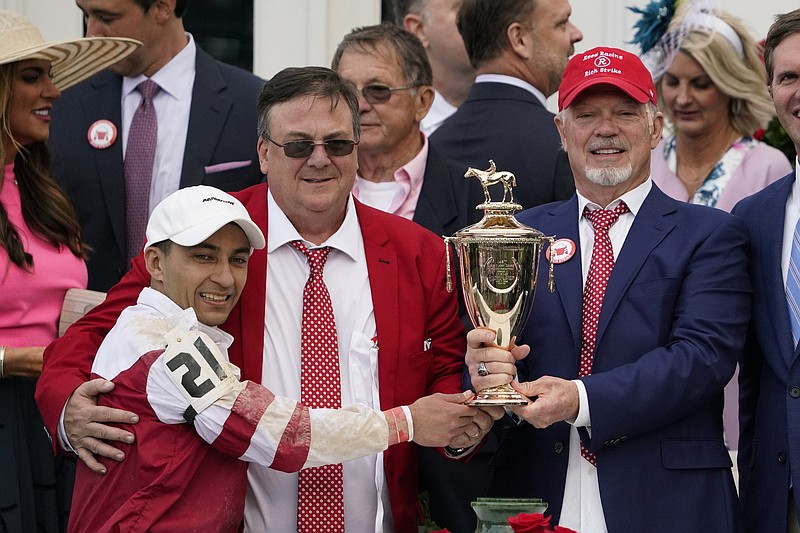 Rich Strike will not run in the Preakness after his major upset to win the Kentucky Derby, keeping horse racing from having a Triple Crown winner for a fourth consecutive year.

Owner Rich Dawson made the announcement Thursday, 10 days before the race in Maryland.

Dawson said he and trainer Eric Reed agreed to stick with the initial plan for Rich Strike and rest him for five weeks. Rich Strike, at 80-1, was the biggest long shot to win the Derby in more than a century. Only Donerail in 1913 paid more to win.

The plan now is to have Rich Strike ready to run in the Belmont Stakes in New York on June 11. Dawson said it was wise for the colt to get extra rest and not face a short, two-week turnaround at Pimlico.

"It's very, very tempting to alter our course and run in the Preakness at Pimlico, which would be a great honor for all our group," Dawson said in a news release. "However, after much discussion and consideration ... we are going to stay with our plan of what's best for Ritchie.

"We thank the wonderful Preakness and Pimlico folks that have reached out and very much appreciate the invite."

Reed did not immediately respond to a message from The Associated Press seeking comment.

Rich Strike was not expected to be the morning-line favorite for the Preakness, with Derby runner-up Epicenter and Kentucky Oaks winner Secret Oath set to be part of the field. He could have been the first Derby winner not to go off as the Preakness favorite at post time since 2012 when I'll Have Another won the first two legs of the Triple Crown.

With Rich Strike's surprise withdrawal, the Preakness will go on without the official Derby champion for the second time in four years. Country House and disqualified winner Maximum Security skipped the race in 2019.

Bob Baffert-trained Medina Spirit finished third in the 2021 Preakness after testing positive following the Derby for a substance not allowed on race day. Mandaloun, who was elevated to the 2021 Derby win long after Medina Spirit tested positive, did not run in the Preakness last year.

Rich Strike's incredible charge past the leaders down the stretch at Churchill Downs after being initially left out of the Derby field became one of the biggest upsets in sports. The owners, trainer Reed and jockey Sonny Leon had all never won the race.

Adding to the impressive tale, Rich Strike had won only once before and had been claimed for $30,000 -- pennies in racing and unlikely for Derby-caliber horses.

Neither Reed nor the Maryland Jockey Club immediately responded to messages from the AP seeking comment.

With Rich Strike pointing to the Belmont, the Preakness appears to be a wide-open race among horses back from the Derby, potentially including Zandon and fourth-place finisher Simplification. Trainer Chad Brown, who saddles Zandon, is also expected to enter Early Voting.

Horse racing has had two recent Triple Crown winners: American Pharoah in 2015 and Justify in 2018. Each was trained by Baffert, who is currently serving a suspension in Kentucky for medication violations that is being observed in Maryland and elsewhere. Baffert transferred Derby horses Taiba and Messier to former assistant Tim Yakteen.

Neither is expected to run in the Preakness.

Longtime Baffert friend D. Wayne Lukas confirmed Wednesday that filly Secret Oath would run in the Preakness and decided to pick a different race next Saturday for Ethereal Road -- the horse that was scratched to make room in the Derby for Rich Strike. 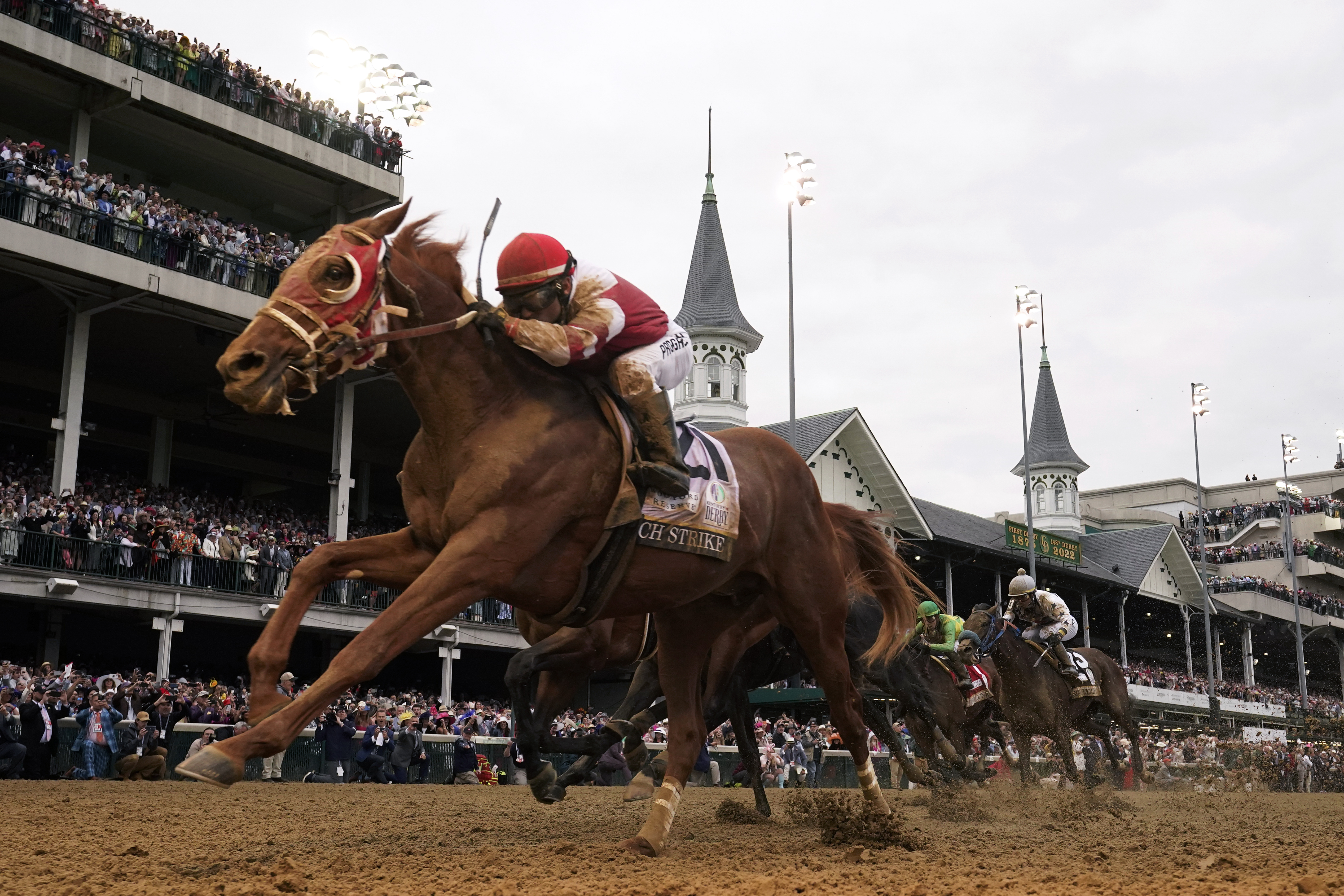 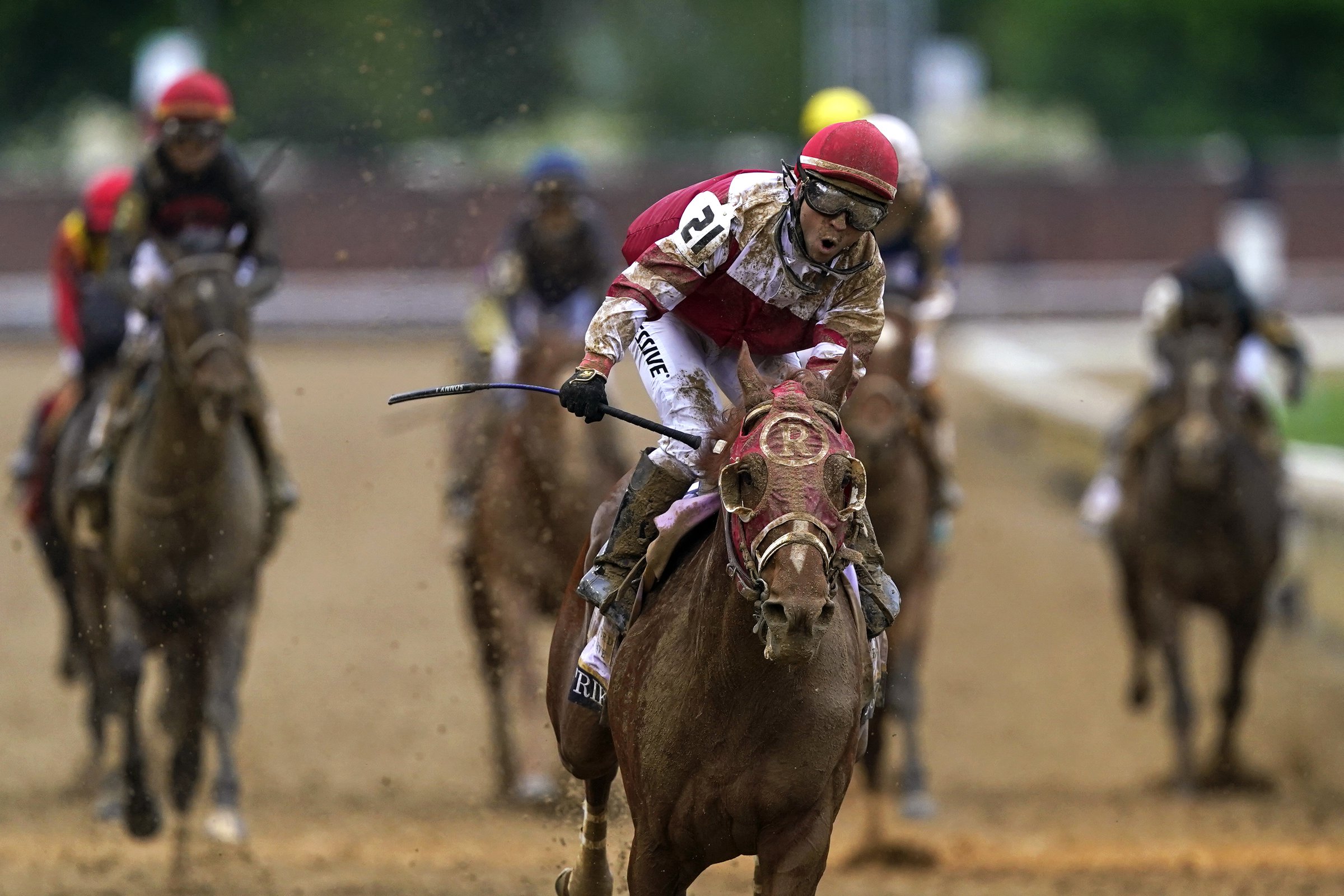 Sonny Leon celebrates after riding Rich Strike past the finish line to win the 148th running of the Kentucky Derby horse race at Churchill Downs on Saturday in Louisville, Ky. Rich Strike will not run in the Preakness, owner Rich Dawson said Thursday. (AP/Charlie Neibergall)