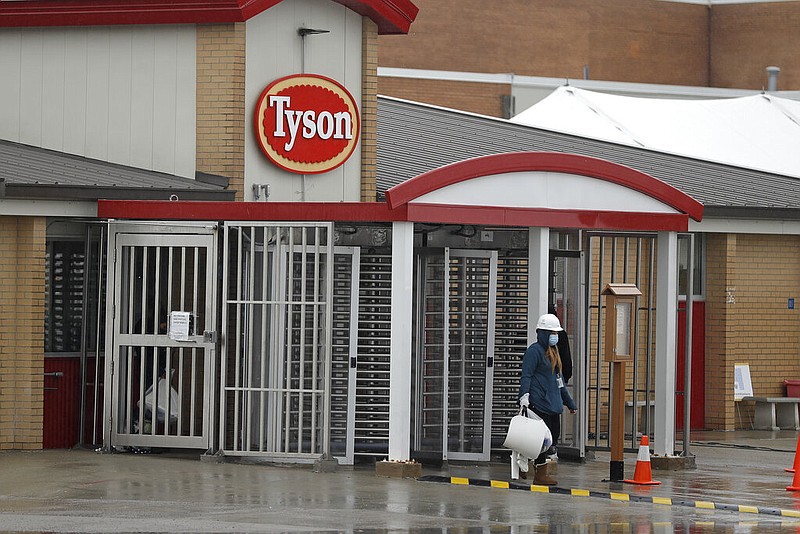 A congressional committee report released Thursday criticized the meat industry, including Springdale-based Tyson Foods, for pressuring the U.S. Department of Agriculture and the Trump administration to smooth the way for meatpacking plants to remain open during the covid-19 pandemic.

The House Select Subcommittee on the Coronavirus Crisis opened the investigation in response to reports that meatpackers "refused to take adequate coronavirus precautions" to protect employees during the first year of the pandemic.

A review of internal industry documents showed that meatpacking companies coordinated with the Trump administration and USDA officials to keep plants open despite an awareness of the high risk of covid spread, the 61-page report stated.

The report asserted meatpacking companies Smithfield and Tyson Foods warned that worker absenteeism and reduced operations because of covid would cause "imminent" meat shortages. But "these fears were baseless," investigators wrote.

Some industry representatives said Smithfield's statements about the meat supply were "whipping everyone into a frenzy" and making a "mess" that others would have to "clean up," the report stated.

Infections and deaths among employees at five of the largest meatpacking companies in America -- Tyson Foods, JBS USA, Smithfield, Cargill and National Beef -- were significantly higher than previous estimates at the onset of the pandemic, with more than 59,000 workers infected and at least 269 deaths during the first year, the report said.

Jim Monroe, a spokesman for Smithfield, said the company "took every appropriate measure to keep our workers safe" and has spent more than $900 million so far on the goal.

"The meat production system is a modern wonder, but it is not one that can be re-directed at the flip of a switch," Monroe said. "That is the challenge we faced as restaurants closed, consumption patterns changed and hogs backed up on farms with nowhere to go." He added that the concerns company representatives expressed to Trump officials were "very real."

Tyson spokesman Gary Mickelson said worker safety has been "our top priority," and said Tyson has worked closely with both the Trump and Biden administrations, along with state and local officials, to respond to the pandemic's challenges.

The report asserted companies were aware of the risks to employees' health, stating a JBS executive received an email from a doctor at a hospital near the company's Cactus, Texas, facility in April 2020 that said all covid patients in the hospital were either JBS employees or their family members and warned "your employees will get sick and may die if this factory continues to be open."

Brashears' former position is currently vacant, according to the USDA's website.

The report said meatpacking companies and the USDA jointly lobbied the White House to discourage employees from staying at home or quitting if they were afraid to report to work because of a "lack of coronavirus precautions and high infection rates in plants," leading former Vice President Mike Pence to issue a message to meatpacking workers: "We need you to continue ... to show up and do your job."

Meatpacking companies succeeded in lobbying USDA officials to advocate for Department of Labor policies to pressure employees to work during covid outbreaks by restricting qualifications for unemployment benefits to those who were furloughed or laid off, or if they satisfied "one of the other statutorily identified reasons," the report said. The companies also asked for liability protection from lawsuits if employees contracted the virus at work.

Per company emails, Tyson collaborated with Smithfield Foods in drafting a proposed executive order, which was shared with USDA officials who previously assisted with lobbying efforts. Components of the draft were later adopted in an executive order issued by Trump that invoked the Defense Production Act to ensure meat processing plants remained open despite outbreaks. This insulated companies from the oversight of public health entities and legally protected them against lawsuits related to covid-related worker illnesses and death, according to the report.

Tyson Foods told the Midwest Center for Investigative Reporting, an independent nonprofit newsroom focused on agribusiness, that Tyson became one of the first fully-vaccinated workforces in the U.S. last year and that the company has spent $800 million on covid-19 safety measures and more than $500 million in wage increases for frontline workers over the past year.

The Biden administration noted in September that four large conglomerates control between 55% and 85% of the beef, pork and poultry markets, per USDA data.

"The concentration of market power in the hands of such a small group of companies has led to significant hardship for many who are forced to do business with these companies," according to the committee report.

"At a recent hearing before the House of Representatives Committee on Agriculture, cattle farmers testified about how large meatpacking companies exploit their stronghold over the industry to secure cheap prices from farmers and ranchers."

The report pointed to significant profit increases for some of these companies during the pandemic:

Information for this article was contributed by Mike Dorning of Bloomberg News (TNS) and Josh Funk of The Associated Press.