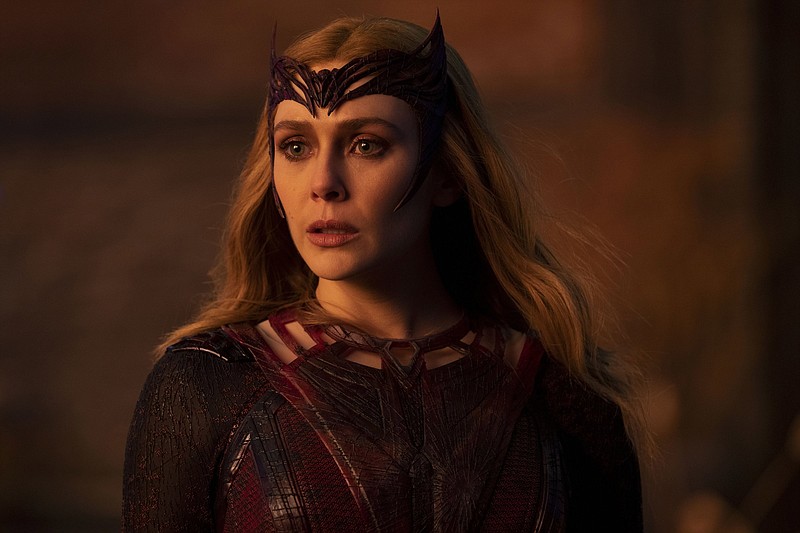 Sokovia’s Scarlet Witch, aka Wanda Maximoff (Elizabeth Olsen) is the real hero of “Doctor Strange and the Multiverse of Madness,” which was the largest opening this year with $185 million.

"Multiverse" has taken over the multiplex.

Disney and Marvel Studios' "Doctor Strange in the Multiverse of Madness" has scored the biggest theatrical opening of the year, grossing $185 million at the domestic box office last weekend, according to estimates from measurement firm Comscore.

Internationally, the superhero epic collected $265 million for a global cumulative of $450 million -- the sixth-highest worldwide debut of all time.

Directed by "Spider-Man" veteran Sam Raimi, "Doctor Strange in the Multiverse of Madness" sees Benedict Cumberbatch reprise his role as the titular wizard opposite Elizabeth Olsen as Wanda Maximoff, also known as the Scarlet Witch.

As of Sunday, "Multiverse of Madness" posted a 75% positive rating on review aggregation site Rotten Tomatoes and a B-plus rating from audiences polled by CinemaScore.

"I don't know that the reviews were ... particularly strong for this movie, but the Marvel brand is so strong that every movie becomes required viewing for fans around the world," said Paul Dergarabedian, senior media analyst at Comscore.

"When you look at the the top movies of the pandemic era all pretty much being superhero films, it seems that the very cinematic nature of the superhero movie ... requires that movie-theater experience and audiences even in these inflationary times."

"If you saw 'No Way Home,' there's no way you could sit out 'Doctor Strange,'" Dergarabedian said. He added that the continuity of the characters and the stories -- "the Marvel Cinematic Universe as a whole" -- has created "an unstoppable moviegoing draw."

"No Way Home" is a Sony title and "Multiverse of Madness" is a Disney title, "but they're inextricably linked," Dergarabedian said.

"At the end of the day, I really do believe that 'Spider-Man: No Way Home' gave a tailwind that helped 'Doctor Strange,' and that's why we're seeing these numbers."

"Multiverse of Madness" also functions as a direct sequel to "WandaVision," the Disney+ sensation starring Olsen as Wanda and Paul Bettany as Vision. The MCU's flagship TV series -- which received 23 Emmy nominations last year -- was a hit with audiences and critics alike.

"Each one of these properties is like an infomercial for Marvel. ... The crossover of characters on the big screen and the small screen ... that's the future for big franchises."

Hollywood's summer movie season typically kicks off in early May and runs through the end of August and -- aside from the last two years -- regularly accounts for over $4 billion in ticket sales (or about 40% of the year's grosses).

There was little left for other movies playing in theaters. Part of that is due to the fact that many multiplexes chose to pack their theaters with wall-to-wall "Doctor Strange" screenings. Film Critic Matt Singer tweeted a photo a Manhattan AMC offering 70 screenings on Thursday alone.

The success of "Multiverse of Madness" only helps build momentum for the big summer movies on the way, like "Top Gun: Maverick" on May 27.

"We've got a real summer movie season on our hands, something we couldn't have imagined two years ago," Dergarabedian said. "It's been a long time coming."

Daring to challenge "Multiverse of Madness" in wide release this weekend is Universal Pictures' remake of "Firestarter," based on the Stephen King novel of the same name.