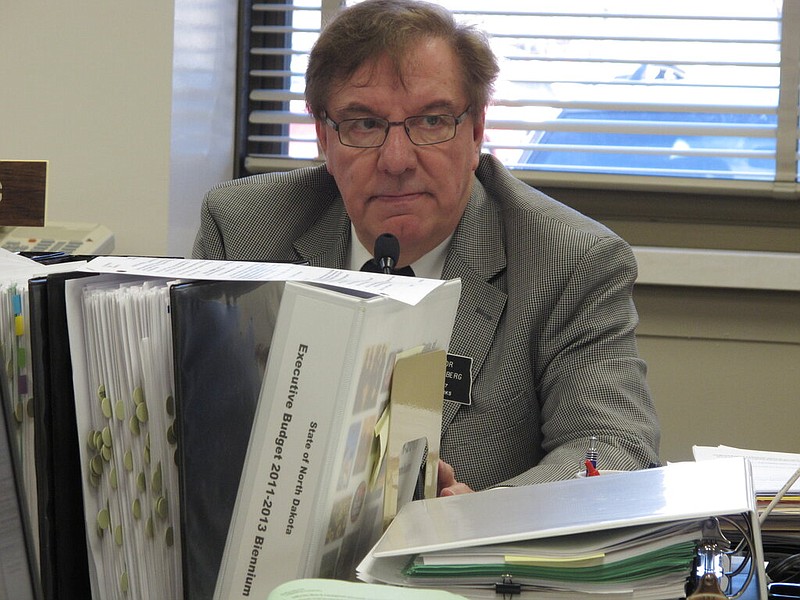 BISMARCK, N.D. — A North Dakota state senator, who is resigning after a report about text messages he exchanged with an inmate, ran up travel expenses the past decade that are more than 14 times what lawmakers bill state taxpayers on average, according to a review by The Associated Press.

Republican Ray Holmberg, the Legislature’s longest-serving senator, has made taxpayer-funded trips to four dozen U.S. cities, China, Canada and several countries in Europe, the AP’s review of travel records showed. He was reimbursed about $126,000 for nearly 70 trips — all out of state — from 2013 through mid-April of 2022.

The 229 lawmakers who served during that period accounted for more than $2 million in travel, or about $8,700 per lawmaker — putting Holmberg’s total many times above the average as he went everywhere from Norway to New Orleans and Portland, Ore., to Puerto Rico.

Holmberg declined to talk to AP, referring questions to his attorney, Mark Friese.

“I’m his lawyer, not his travel agent,” said Friese, a prominent North Dakota defense attorney. “The propriety of his travel is a question” for the Legislature, Friese said.

Holmberg announced this month that he would end his 46-year-career in June following a report that he had traded scores of text messages with a man jailed on child pornography charges.

Police and federal agents seized video discs and other items from Holmberg’s Grand Forks home in November. A police report did not give a reason for the issuance of a search warrant. It came about three months after Holmberg exchanged 72 text messages with Nicholas James Morgan-Derosier as Morgan-Derosier was held in the Grand Forks County Jail.

There has been no indication that Holmberg’s travel is part of any investigation.

The 79-year-old was the Legislature’s top traveler in at least the past decade — a period when he held a post that allowed him to approve his own travel. Records for his state-reimbursed travel during the previous three decades of tenure are incomplete or no longer exist.

The retired school counselor’s trips were both legal and justifiable given his tenure and his chairmanships, GOP Senate Majority Leader Rich Wardner said. But Wardner said he was surprised at the extent of travel.

“I know he went on a lot of trips but I didn’t keep track of him,” Wardner said.

His House counterpart, Rep. Chet Pollert, declined to comment on the appropriateness of the travel: “That was his decision to travel and it’s up to him to determine whether it was right or wrong.”

Dustin Gawrylow, director of the North Dakota Watchdog Network, said spending for lawmakers to attend some conferences is justified. But he called Holmberg’s travel excessive.

“Clearly, there was an absence of checks and balances in the process,” he said. “I think it certainly illustrates the need for more transparency and oversight. Nobody, regardless of their position, should be in a position to approve things that benefit themselves.”

Lawmakers get $189 in per diem if they attend meetings while traveling. Holmberg’s expenses for the trips in the past decade include just under $47,000 in per diem. Put another way, Holmberg’s daily reimbursements indicate that he spent more than eight months over the past decade traveling outside North Dakota at state expense.

Many of Holmberg’s trips were to meetings organized by the Council of State Governments and the National Conference of State Legislatures, which are national groups that represent state lawmakers. He was involved in the group in part through his work on redistricting committees since 1981.

Holmberg for years chaired the powerful Senate Appropriations Committee, which along with its House counterpart controls state spending, including budgets for lawmaker travel. For most of the past decade, he also served as head of a powerful panel, Legislative Management, that oversees the Legislature’s business between sessions. In the latter role, Holmberg alone was authorized to approve travel for lawmakers, including his own under rules governing the Legislature.

Pollert served as chairman of Legislative Management for two years in the past decade, and now heads the committee again with Holmberg’s resignation. He said during that time, he approved one trip for himself — a gathering of legislative leaders from across the country who met in Puerto Rico.