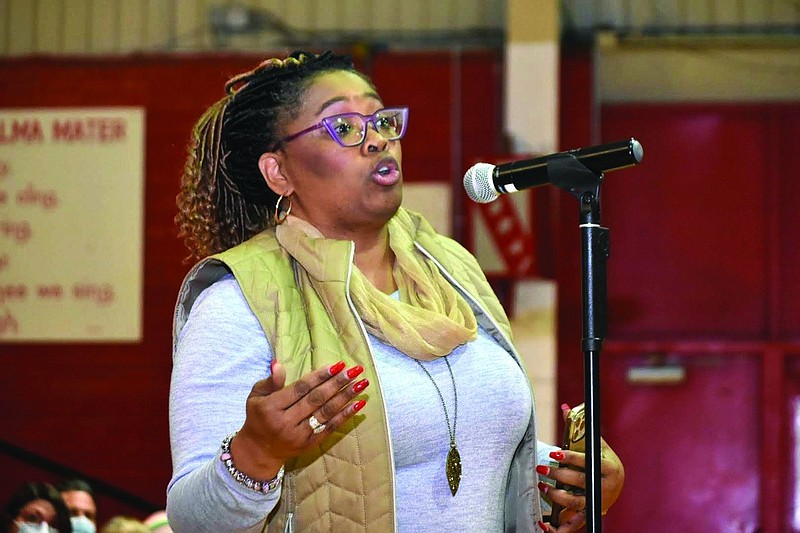 About 20 Pine Bluff School District supporters attended Thursday's Arkansas Board of Education meeting in Little Rock, with some stepping to the podium to ask the trustees to remove Barbara Warren as the district's superintendent.

Warren has led the PBSD since July 2020 while still supervising the Dollarway School District, which was annexed into the Pine Bluff district in July 2021. She was appointed to lead both state-controlled districts by the Arkansas Department of Education.

But PBSD stakeholders accused Warren of an inability to turn around a school district that is struggling academically, referencing a failed attempt to restore Dollarway to local control after the ADE operated it for five years. They also criticized her ability to communicate with the public and demanded a security plan for Pine Bluff High School be revealed as well as a construction plan for a new high school, for which the ADE approved matching funding last August.

"I don't see where Mrs. Warren has a proven track record to have been in a position to turn around a school [district] to get us out of what we are in," said Trammell Howell, who organized a bus ride for the district patrons to the state board meeting. "Yes, she was at Dollarway. Yes, they made some improvements, but they didn't come out. So, we are still concerned that we've been given a superintendent who can't get us out."

The state board dissolved the PBSD board when it ordered the Education Department to take over the district in September 2018, as it did with Dollarway in December 2015. Thus, state education Commissioner Johnny Key and the state board act as the top decision-makers for the PBSD.

Under state law, the ADE must return a school district it controls to a local board, annex it with another district, consolidate it with another to create a new district or reconstitute it.

Howell and other supporters have criticized Warren for keeping the former Dollarway district buildings open when the PBSD was taken over for financial distress, as well as not unveiling its security plan for PBHS to stakeholders amid acts of violence at or near the campus. Within the past year, Warren has organized a community advisory board to support her in the design of a strategic plan for the district, a plan Howell told Warren in a public meeting earlier this year should have been implemented when the annexation happened.

Rosalind Mouser, a Pine Bluff attorney, said citizens will respond to new leadership in the district.

"Give us a chance," she said. "Join with us, and unfortunately, I do think that means, from what I've heard over the last few months, that is going to mean Mrs. Warren has got to be removed. And the good news is that there are people out there who can help us get that done."

Mouser also criticized Warren for ordering football equipment for Dollarway High School when the Dollarway district no longer exists. The PBSD supervises two athletic programs, one of them being the Pine Bluff Zebras/Fillies and the other the Dollarway Cardinals.

Asked about the public outcry against her, Warren said in a text:

"It is very concerning of course. Like anyone else, I would prefer the Stakeholders be supportive of me, but I can't control that. As long as they are supportive of the district and lend themselves to working together in a positive and productive way we can still make progress together."

Howell, the parent-teacher organization president, said she expected about as many concerned citizens to show up Thursday and added they will continue to attend each month until they see progress in the PBSD.

"We just want to make sure, today was not a bashing," she said. "We're all here as concerned parents. We expect everything for our students just like the Northwest Arkansas kids get. We want the same thing in southeast Arkansas."

Said district patron Julius Wright: "The administration is not trying to resolve fiscal distress by maintaining two high schools or two administration buildings." Warren has said the state board ordered Dollarway schools to remain open when the district was annexed.

Wright gave examples of high schools and districts in Jefferson County that have merged with others in the past five decades, most recently Altheimer Unified to Dollarway in 2006.

Charline Wright, chairperson of the PBSD Concerned Stakeholders, told the board the district stakeholders felt "disenfranchised and violated" when reviewing transcripts of past state board discussions about the Pine Bluff and Dollarway districts. She accused Smith of "deliberately" only allowing feedback from the Dollarway community rather than the pre-annexed PBSD in November 2020, adding PBSD members would have supported a full consolidation of the districts.

"We are concerned that the things that are being done to the Pine Bluff School District [are] deliberate in jeopardizing our fiscal stability and not to make us meet the Level 5 intensive support criteria that would set us up to be annexed or consolidated into the remaining school district and also subjecting the Dollarway School District to five more years of Level 5 intensive support," Charline Wright said. Level 5 is the strongest of five levels of support the state education department gives to a district under its control.

Mouser outlined six requests the stakeholders made to the state board: to detail the security plan for Pine Bluff High School, an aging campus with multiple entrance points that has seen a number of acts of violence on it or within proximity to it in recent months; to consolidate Pine Bluff and Dollarway high schools (which Warren said would take place upon construction of the new high school); to unveil the renovation and construction design of the new campus; to place a millage on a ballot; to implement academic and extracurricular excellence plans; and to conduct a national search for a new superintendent.

"Mrs. Warren admitted recently in a facilities meeting she has done nothing to try to recruit students, teachers and faculty for the next school year," Mouser said. "I don't know how you get that done if your leader doesn't start. How can we impact student learning if the superintendent we currently have doesn't seem to be interested in doing that?"

Howell said district supporters are praying the state board acts on their suggestions soon.

"Everything is in your hands," Pine Bluff Urban Renewal Agency Executive Director Chandra Griffin told board trustees. "If the Pine Bluff School District is successful, this board before me will be successful."