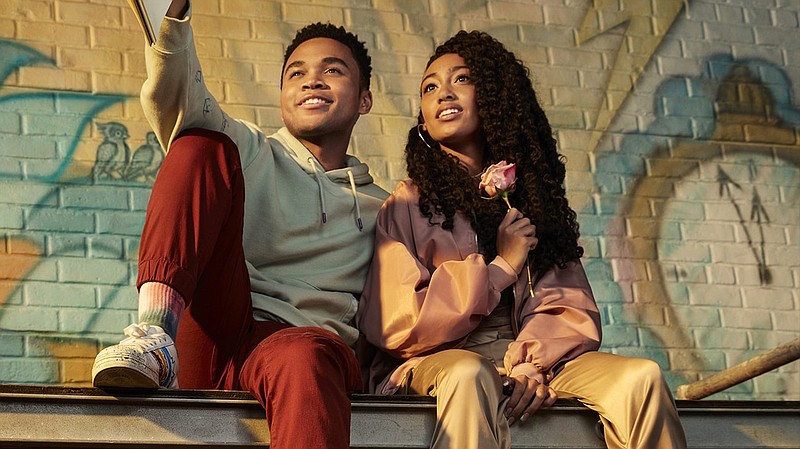 "Sneakerella" is the latest original movie offering on Disney+, the House of Mouse's streaming service famous for giving the world Star Wars and Marvel television series.

This film is essentially a love letter to Disney Channel Original Movies that should resonate with millennials and zoomers who grew up watching cult hits like "Halloweentown," "Zenon," "The Thirteenth Year," and more.

I was fortunate enough to grow up with cable in the '90s and early 2000s, which gave me access to a bunch of these made-for-television movies on the Disney Channel. Ask any person today from ages 25-35 (I won't tell you where I fall in that spectrum), and they probably remember growing up with classics ranging from "Mom's Got a Date with a Vampire" to "Wendy Wu: Homecoming Warrior."

And "Sneakerella" feels like an homage to these earlier movies that may not have had the budget of a theatrical release but brought something enjoyable to the table nonetheless. I always found the magic of Disney Channel Original Movies was the memorable moments they created for viewers by embracing their campy tone and dime-store budget wholeheartedly.

"Sneakerella" is a musical that offers a twist on the classic "Cinderella" story by following the adventure of a boy with evil stepbrothers and a strict stepfather.

The main character is a self described "stock boy" by the name of El (Chosen Jacobs) who grew up in a shoe store in Queens with his loving mother. She taught him from an early age that sneakers are a window to the soul, and he learned how to read people by the designs in their shoes, making him a "sneaker psychic."

But readers likely know how Cinderella goes. The loving mother passes away, leaving El to deal with a harsh stepfather, Trey (Bryan Terrell Clark) and two nightmare siblings who work to make his every moment a living nightmare. Instead of having a fairy godmother, El has a fairy godfather by the name of Gustavo (Juan Chioran) who works magic to help our hero get to the charity gala so he can show off his handmade sneakers and win over a girl named Kira King (Lexi Underwood), daughter of Darius King (John Salley), a sneaker tycoon and former NBA star.

Gustavo warns El not to stay out past midnight, the magic starts to wear off, and while fleeing the gala, El leaves behind one of his special sneakers, which Kira uses to try to track him down for a big design contract.

"Sneakerella" is an interesting twist on an age-old fairytale. And it's an important movie for a few reasons.

First, this film represents Disney investing its money to produce a movie with a majority-Black cast. And in a world of American entertainment that's still wildly white in 2022, this represents what we need more of in the movie world.

Second, "Sneakerella" puts a spotlight on a subculture of sneaker collectors called sneakerheads.

Here's a snippet from an article titled, "Sneakerheads, not hypebeasts: Defining a sneaker-driven subculture":

"A new study reveals that for 'Sneakerheads,' sneakers are an important facet of their identities, particularly for African-American men who grew up in the 1970s and '80s coveting sneakers popularized by hip-hop stars and basketball legends."

I quoted that article because I'm widely ignorant of sneakerhead culture, and given that it's a wide portion of "Sneakerella," I wanted to define the importance of this theme and subject for others, like me, who aren't part of this subculture.

What makes sneakerheads fascinating isn't just the wildly creative artwork that goes into their footwear, but that the best shoes will have a personal story behind them from the designer.

And El's story is one of a talented artist who just needs one shot to make his dreams come true and how hard his socioeconomic and family circumstances work against him, adding to his charm when he does succeed in victories both large and small.

El is a charming kid, and Jacobs does a good job portraying his desire to create art and the teen excitement that comes from falling in love after revealing one's authentic self. Underwood plays a fierce future business leader eager to chart her own path within her father's company. El and Kira make a cute couple with obvious chemistry.

One of the best parts of "Sneakerella" is the artwork itself, particularly when El's designs come to life and move around the screen. It really provides a window into his creative process and lets viewers know exactly what he's picturing in his mind when he's inspired to create.

The film's downside is its music. The soundtrack isn't bad. It just feels generic and unnecessary. None of the tunes are memorable, and they all sound like a standard pop song one would expect to hear on a Disney TV movie soundtrack. "Sneakerella" would have worked a lot better as a straightforward movie without any song and dance numbers.

Still, the film has great moments. I cried during El's flashbacks to his mother getting sick and dying. Disney earned a tear, which is impressive for a made-for-TV movie. And I shed another tear for El's best friend Sami (Devyn Nekoda) who is probably gay but doesn't get a chance to really show it aside from rainbow hair, makeup, and pins. Throw us gay viewers a bone, Disney.

I watched this film and was reminded of movies I look back on fondly like "My Date with the President's Daughter" and "The Other Me."

The film is available on Disney+ today.