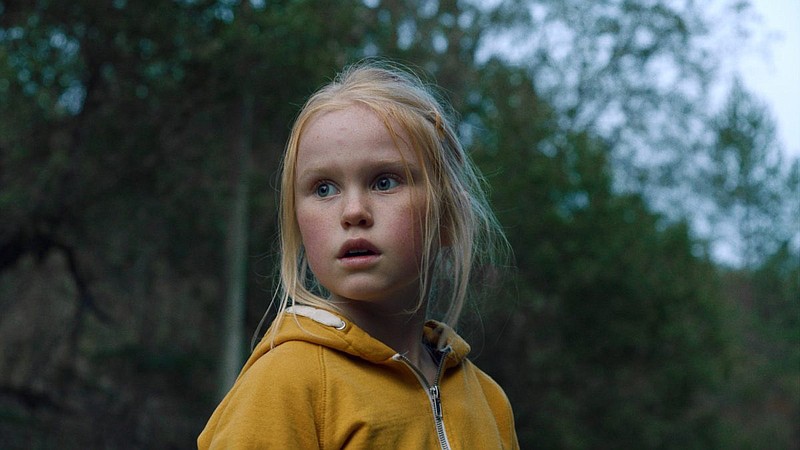 In Eskil Vogt’s creepy kid horror film “The Innocents,” little Ida (Rakel Lenora Flottum) is a 9-year-old Norwegian girl who falls in with a bad crowd after she moves into a new apartment complex with her family.

Fresh off his Best Screenplay Oscar nomination for "The Worst Person in the World," Norwegian filmmaker Eskil Vogt goes in a much different direction with his new movie "The Innocents." This subtle yet relentlessly eerie supernatural thriller first premiered at Cannes in 2021. Now it's set for release this weekend and I promise you, this one will rattle you in ways you won't be expecting.

Vogt is best known for his screenwriting collaborations with Joachim Trier. The duo have made five feature films together. With "The Innocents," Vogt steps out on his own for only the second time (his first solo film was 2014's "Blind"). Here he writes and directs with a masterful child's-eye perspective, telling a story that's beautifully evocative and deeply sinister.

Vogt uses his richly detailed but thoroughly unsettling vision to explore the notion of childhood innocence and burgeoning moral conscience. While he handles the subjects with a great deal of restraint, Vogt also manages to shake us to our core. Part of it is due to his ability to infuse a near unbearable level of dread into certain sequences. He's also not afraid to shock his audience, using violence in a way reminiscent of Michael Haneke. Not simply for the sake of doing it, but with a precise intention in mind. It gives his movie a real bite.

Pretty much the entire story takes place in and around a large Norwegian apartment complex. Our avatar is 9-year-old Ida, who's played by the incredibly expressive Rakel Lenora Flottum. Ida has just moved to the apartments with her parents (Ellen Dorrit Petersen and Morten Svartveit) and her autistic older sister Anna (Alva Brynsmo Ramstad). Vogt builds a compelling family dynamic centered around Ida's relationship with the mostly nonverbal Anna. Jealous of all the attention her sister requires from their parents, a resentful Ida will often pinch Anna when no one's looking and sometimes does much worse.

While Ida's cruelty is troubling, Vogt doesn't cast her in a one-dimensional light. There's more to her character and it really begins to come out once she makes two new friends, a troubled boy named Ben (Sam Ashraf) and the kindhearted Aisha (Mina Yasmin Bremseth Asheim). The two come from significantly different single-parent homes. Aisha's mother (Kadra Yusuf) loves her dearly but struggles financially to make ends meet. Ben's mom (Lisa Tonne) is abusive and neglectful, often leaving her young son to fend for himself.

The supernatural element is introduced after Ben reveals his telekinetic powers to Ida. It starts innocently enough with him snapping twigs and flinging pebbles with his mind. Neither seem shocked by his power. Both treat it with the same childlike amusement as they do Ida's double-jointed elbow trick. They laugh it off the way kids often do with any cool little discovery. But some of their other antics go beyond simple kiddie mischief, and reveal a darker side to Ben that even Ida finds unsettling.

Aisha adds another variable to the story. Along with being sweet and compassionate, she also possesses psychic abilities that allow her to speak with people via their minds. It's through Aisha that we learn Anna also has untapped supernatural powers of her own. I won't spoil where things eventually go, but the interactions between the four children fester into something disturbing and deadly. And while the main story turns chilling and occasionally brutal, a powerful subtext examining class and minority status simmers under the film's surface. It's something that could've been explored deeper, but at the same time it's there and relevant.

There are several interesting storytelling choices that are surprisingly effective. For example, we get no lengthy backstory explaining how these children acquired their powers or how widespread the phenomenon may be. It sounds like a significant omission, but by keeping us captive in their small confined world, such detail isn't needed. Also, you may wonder about the adults. They're present but they mostly exist on the periphery. They nicely serve the young characters, and their influences (both good and bad) can be felt in their children.

I also like how Vogt uses several clever methods to keep us always seeing things from the children's perspective. One of my favorites is his visual approach. Cinematographer Sturla Brandth Grovlen's camera often puts an emphasis on the height of the children's surroundings. Shots of the massive high-rise apartment building, the near bottomless stairwell in their complex, the towering trees in the nearby forest where they play -- they all contribute to capturing the world the way these four young people see it. It may sound like a small detail, but it's an artistic touch that proves effective.

Led by four outstanding child performances and an unflinching vision from writer-director Vogt, "The Innocents" uses elements from the horror genre to challenge the traditional way we often depict childhood, both in the movies and in reality. It can be hard to watch (take heed cat lovers), and its patient and unvarnished style may let down those looking for a more conventional genre film. But that's a key thing I loved about it. Vogt's clear-eyed treatment allows him to focus on what matters most -- his characters. And it's their stories, as tragic and as uneasy as they may be, that makes this a hard movie to shake.