Turnstile numbers up for UA 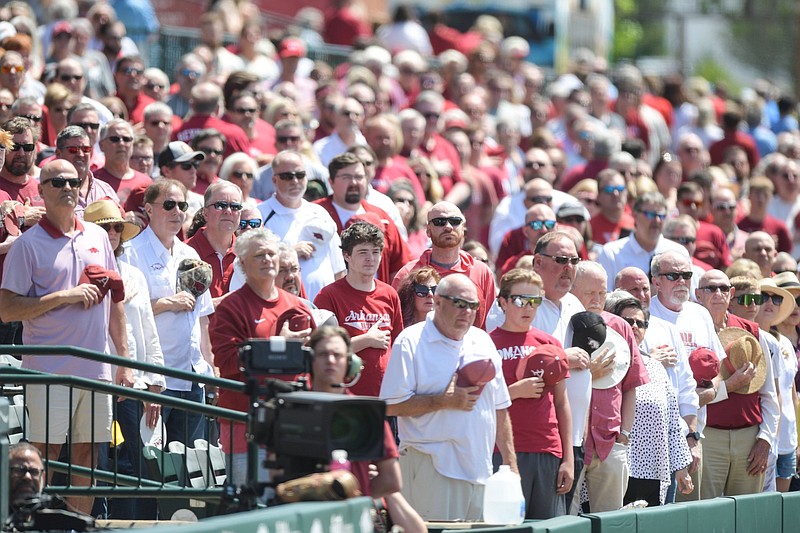 The University of Arkansas leads the NCAA with 318,481 baseball tickets sold to 31 on-campus games this season. The Razorbacks are averaging 4,581 tickets scanned per game at Baum-Walker Stadium, which is higher than the 2019 regular season, the last time Arkansas allowed full capacity for an entire season. (NWA Democrat-Gazette/Hank Layton)

FAYETTEVILLE -- The average number of tickets scanned at University of Arkansas baseball games this season is higher than the 2019 regular season, the last time the Razorbacks allowed full capacity for an entire season.

Scanned ticket figures were provided to the Arkansas Democrat-Gazette through a Freedom of Information Act request. Announced attendance at Arkansas baseball games is for tickets sold.

The Razorbacks lead the NCAA with 318,481 tickets sold to 31 on-campus games this season.

A three-game Baum-Walker Stadium record of 34,796 tickets were sold to a series against Ole Miss two weeks ago. Actual attendance for that series, based on tickets scanned, was a season-high 22,829.

For home SEC games, Arkansas has scanned an average of 6,272 tickets, which is slightly lower than the 6,357 tickets scanned for the first 12 SEC home games of 2019.

Baum-Walker Stadium's capacity has expanded by more than 700 since the end of the 2019 season with the addition of premium and standing room-only areas. That means the percentage of 8,237 chair-back seats being occupied might be lower this season.

During an interview on Arkansas' ESPN Radio affiliates on April 28, Arkansas Athletic Director Hunter Yurachek said he has heard comments about empty seats at the stadium.

"While it looks like it has fallen off, I think we all have a little selective memory of what March and April of 2018 and 2019 looked like, as compared to March and April of 2022. It looks very similar, and I expect as we get into May and regionals and super regionals, you'll see that stadium -- like it has in the past -- create a dynamic home-field advantage for our team moving forward."

The Razorbacks' home SEC schedule this season is similar to the home schedule in 2019. Both seasons included series against LSU, Ole Miss and Mississippi State. Arkansas hosted Missouri and Tennessee from the SEC East in 2019, while this year's SEC East home opponents were Kentucky and Vanderbilt.

Arkansas freshman first baseman Peyton Stovall, who has missed the past six games after suffering an injury to a finger on his right hand, should be available to play against Vanderbilt this weekend, Coach Dave Van Horn said Thursday.

Stovall was injured two weeks ago when he took grounders at second base before a game against Ole Miss and a ball bounced up, hit a fingernail violently and resulted in a lot of bleeding.

"That fingernail is still kind of messed up, but he seems to be fine throwing and hitting," Van Horn said. "He looks like he can grip the bat with that middle finger on his right hand, so he can feel the bat a little better, have a little more power."

Stovall has played in 37 games this season, including 36 starts, and is batting .263 with 3 home runs and 16 runs batted in.

Arkansas' Dave Van Horn and Vanderbilt's Tim Corbin are both in their 20th season as SEC coaches. Tonight's game will mark their 41st meeting in the SEC.

"I think our relationship is good," Van Horn said. "I mean, we know how hard it is.

Van Horn is 786-414 at Arkansas and has won his past two games against Corbin's Commodores, including 6-4 in last year's SEC Tournament.

"I think there's a lot of respect between the two programs and the coaching staffs," Van Horn said. "They work hard. We work hard. We're both hard to beat.

"Our teams show up pretty much every game. There's a high expectation in both programs, and you can see it by the way the players play and act."

There are other players on the team listed as seniors, but they still have another season of eligibility remaining because of covid-19. The players being honored have no more eligibility after this season.

"He's the best leadoff man in the country," Arkansas Coach Dave Van Horn said. "He can bunt, he can work a walk. He's also showing power this year [with 6 home runs]. Then he's a top-notch center fielder, too. He can cover a lot of ground."