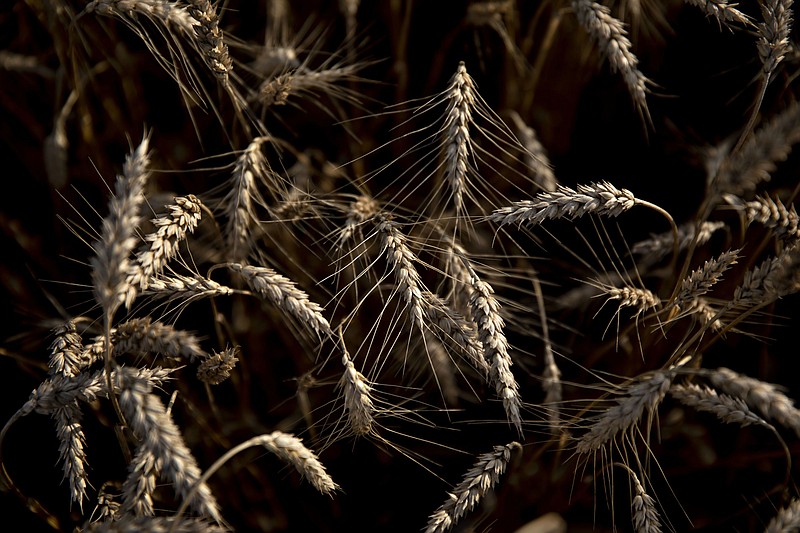 Soft red winter wheat in a field during harvest. MUST CREDIT: Bloomberg photo by Daniel Acker.

Droughts, flooding and heat waves threaten output from the U.S. to France and India, compounding shrinking production in Ukraine. Just about every major producing region is facing one threat or another. The one notable exception is Russia, which is shaping up for a bumper crop and stands to benefit from the rising prices and limited supply elsewhere.

Wheat is hardy and its vast geographical spread typically means shortages in one place can be filled from elsewhere. But the litany of challenges is testing that resilience. Analysts expect world output to drop for the first time in four seasons, according to a Bloomberg survey before a U.S. Department of Agriculture report Thursday. That's likely to keep the price of many food staples high as hunger and cost-of-living crises deepen from Africa to Europe.

"If there was ever a year where we needed to see optimum conditions and strong yields around the world, this was going to be it," said James Bolesworth, managing director at CRM AgriCommodities. "Clearly that situation is not being seen. It adds more risk to this highly volatile situation."

Here's how crops are faring across the Northern Hemisphere:

• European Union: Warm, dry weather is a growing concern in the world's top wheat exporter, after a favorable start to spring. Crops in half the wheat belt lack rain at the onset of a key development period, and temperatures in top grower France have soared to summer-like levels unseasonably early. While the production outlook could still brighten, much will hinge on whether the water deficit eases in the next few weeks.

"If the lack of rain persists until the end of the month, we'll have to look again at our yield forecasts," said Aurelien Blary, a crop analyst at Strategie Grains.

• United States: Dryness plaguing the U.S. Central Plains has already led some growers to write off parched hard red winter wheat, used by millers and bakers for bread flour. Harvests in top producer Kansas start next month, and output will fall "well below" the five-year average, said Aaron Harries, vice president of research and operations for Kansas Wheat. Crop insurance agents expect some fields to yield zero to five bushels an acre, versus the normal 35 to 40 bushels, he said.

The supply pinch threatens to send elevated grain prices even higher, worsening inflation across supply chains and hurting U.S. exports. "Everything west of the Mississippi River needs rain," Harries said. "If we don't have those regular showers, the size of the crop will get smaller every day."

Meanwhile, excessive rains further north are making it tough to plant spring wheat used to make bagels and pizza. Minnesota farmer Tim Dufault estimates his state has already lost about 5 bushels per acre in yield potential from the delays. Sowing in North Dakota has been "painfully slow," with only 8% seeded versus nearly two-thirds at this time last year, according to the state's wheat commission.

• Canada: Similar dueling weather problems are playing out across the border. Cool temperatures delayed seeding in Canada, and producers are now trying to plant in fields that are either too wet or too dry.

Drought is a concern in southern Alberta, a growing area for spring wheat and durum used in pasta. Moisture there is lower than a year ago and dry, windy conditions are eroding soils, according to its agriculture ministry. Further east in Manitoba, a series of storms have sidelined farmers. More rain is in the forecast this week, casting doubt on progress anytime soon.

"Virtually 99% of the farmers haven't got to the field yet," said Bill Campbell, president of Keystone Agricultural Producers, noting it may take a week for things to dry once the rain stops. "It's back to square one."

• India: Blistering heat scorched wheat fields in the world's second-biggest grower, damping expectations for exports to alleviate a global shortage. March temperatures soared to the highest ever for the month in records going back to 1901, parching the crop during a crucial period. That spurred estimates that yields will slump 10% to 50% this season.

The food ministry cut its production forecast to 105 million tons, from an earlier outlook of 111 million tons, and some traders think the crop will be even smaller. Severe heatwaves are continuing in parts of northern India, which may cause some harvest delays if people avoid going out.

• China: China leads global wheat production, and there are concerns about its winter wheat after unusual autumn floods. Videos on social media show acres being cut down before maturation by farmers hoping to get a better price selling it for animal feed.

Fields are scheduled for harvest in about 20 days, and officials are investigating whether there has been any illegal destruction. China will want to limit its dependence on foreign supply after becoming one of the top importers over the past two seasons.

• Black Sea: Soil moisture is satisfactory in Ukraine, buoying yield prospects. But the war will curb production, and there's worries about where to store the crop as backlogged exports leave silos bulging with last year's grain.

Russia has also seen favorable weather and could reap a near-record harvest. That's bolstered shipment prospects, although freight and insurance costs are high and some merchants are shunning its commodities.