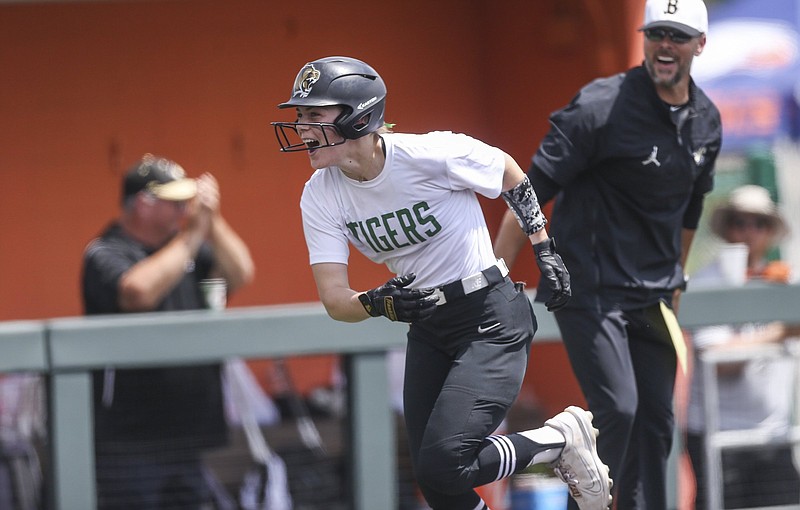 Bentonville’s Kasey Wood hit a home run in the Lady Tigers’ 11-4 victory over North Little Rock in the second round of the Class 6A softball state tournament Friday in Rogers. More photos are available at arkansasonline.com/514bhsnlr/ (NWA Democrat-Gazette/Charlie Kaijo)

Bentonville answered in the bottom of the first and then went about its business from there in an 11-4 win at Rogers Heritage's ballpark to advance to today's semifinals against Bryant.

"Everything is always emotional at the start," Bentonville Coach Kent Early said. "Emotion wears off, but that's how the game works."

Sophomore right-hander Ryann Sanders shook off the early North Little Rock punch and settled in, not allowing another run until the fifth inning. By then, Bentonville (22-3) had built a 7-2 lead.

"Yeah, I just had to reset my mind for a second," said Sanders, who improved to 13-1 with the win. "Just take a deep breath. It's not over, we have the bats to come back. And we did that."

North Little Rock's Janiah Wilson, who was 2 for 3 with a double, blasted the first pitch she saw from Sanders for a line-drive single. Charging Wildcats second baseman Josie Golden followed by taking a 2-0 pitch over the wall in left-center. The ball hit the top of the wall and skipped over, giving North Little Rock (17-10) a 2-0 lead.

The lead evaporated quickly. No. 1 seed Bentonville tied it in the bottom of the first. Junior third baseman Kasey Wood, a University of Arkansas commitment, launched a solo home run to lead off , and the Lady Tigers added another run when Alleyna Rushing singled, stole second and later scored on an error.

Bentonville went up 4-2 in the second thanks to savvy base running, then padded the lead in the third with two more runs as a double-steal set the stage for nine-hole hitter Tallulah Pascucci's scorching two-run single to make it 6-2. Pascucci finished 2 for 4 with 3 RBI.

"Things work out for a reason," Early said. "Hallie [Robison], our left fielder, is normally in that nine-hole spot. She had to be a flex player today. She dove for a ball in practice Tuesday and hit her elbow on the turf, kind of strained her bicep. But Tuee is an elite-level player. She's committed to Southern Miss. That's what she does. She's been getting some at-bats this season, but she's a big-time player and she stepped up for us today."

After the shaky start, Sanders went five innings and struck out three to earn the win.

Bentonville will take on Bryant at noon today at Rogers High School in the early semifinal game.

The Lady Hornets grabbed an early lead and never let go to advance to today's semifinals.

Bryant (21-6) took a 4-0 lead in the third and added three more runs in the later innings.

Regan Dillon was 2 for 2 and drove in three runs to lead the Lady Hornets. Abby Gentry and Emma Bonvillian each smacked doubles.

Alyson White earned the win in the circle. going 42/3 innings.

Marybeth Dyson and Stephanie Crittenden had two hits each for Bentonville West (18-11). Grace Cordell and Ciera Cravens each had a double.

Akayla Barnard pitched a one-hitter and the No. 1 seed Lady Panthers rolled to a shutout win.

Barnard struck out 12 in the complete-game win.

She got plenty of run support as Cabot (20-5) bashed four extra-base hits including a home run and double from Emma Scales and doubles from Brianna Garriga and Adreya Braddy.

Ava Johnson dominated in the circle, allowing two hits to lead the No. 2 seed Lady Mounties.

The sophomore left-hander struck out 13 and did not walk a batter to lead Rogers (19-4) to a semifinal match today against No. 1 seed Cabot at 2:30 p.m. on the Lady Mounties' home field.

Rogers scored single runs in the first and second innings and that was more than enough for Johnson to nail down the win. Kadence Janney belted a double for the Lady Mounties and Ashlyn Hulett added an RBI single for Rogers. 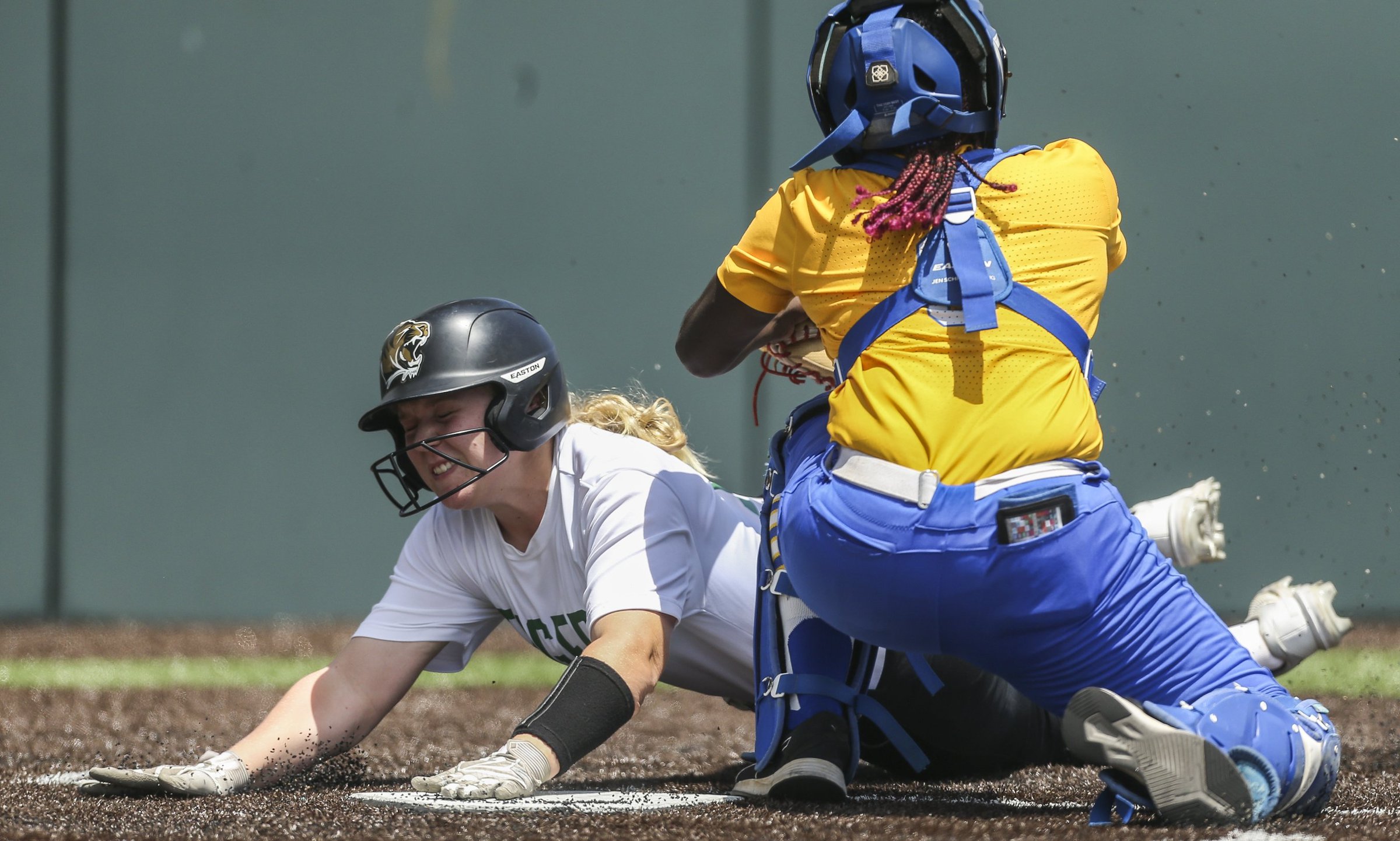