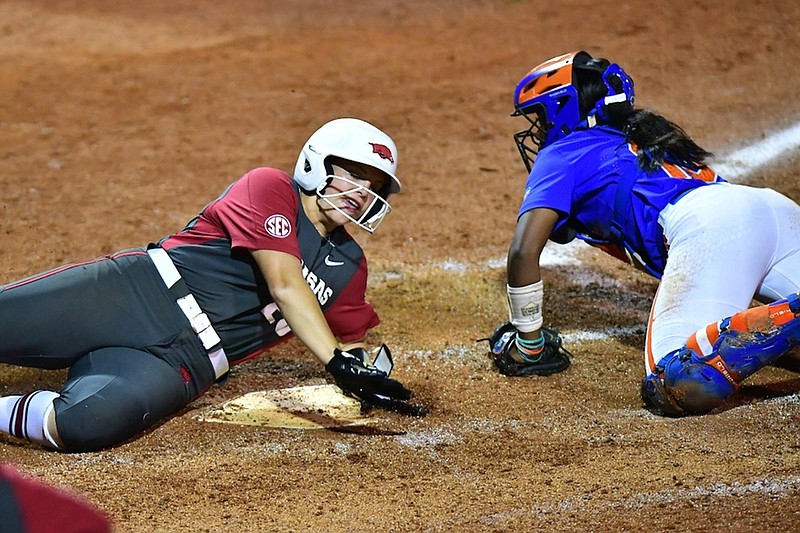 Arkansas third baseman Hannah Gammill (left) scores on a throwing error by Florida’s Rylee Trlicek to make it 1-1 in the fourth inning Friday in a 4-1 victory over Florida in the semifinals of the SEC Softball Tournament in Gainesville, Fla. Arkansas will face Missouri at 4 p.m. today for the championship. (Photo courtesy University of Arkansas Athletics)

The University of Arkansas finally got to the Florida defense, scoring three unearned runs in the fourth inning on its way to a 4-1 victory Friday night in the SEC softball tournament semifinals at Katie Seashole Pressly Stadium in Gainesville, Fla.

The Gators (43-16) were dynamic defensively in the first three inning. But things fell apart for the tournament hosts in the fourth, as Arkansas (43-9) rattled Florida reliever Rylee Trlicek, whose defense allowed the fourth-ranked Razorbacks to score all four of their runs in advancing to today's tournament championship game against Missouri.

"We got some lucky breaks," Arkansas Coach Courtney Deifel said. "We were able to finish it out with a great win."

With Florida leading 1-0, Arkansas loaded the bases on two singles and a walk off Florida freshman Lexie Delbrey. Trlicek was summoned from the bullpen by Gators Coach Tim Walton and quickly got Kacie Hoffman to force out Danielle Gibson at home on a grounder back to the mound for the first out.

That was the best Trlicek could offer on the next three plays.

Trlicek fielded a grounder by Audrie LaValley and threw past catcher Sam Roe, which allowed Hannah Gammill and Linnie Malkin to score, giving Arkansas a 2-1 lead.

Marlene Friedman then hit a soft tapper near the mound which Trlicek hesitated to field, allowing Hoffman to score on an infield single. With runners on first and third, KB Sides hit a grounder back to Trlicek, who instead of throwing home to catch LaValley or to second to start a double play, threw to first to get Sides out. LaValley scored to make it 4-1.

"I thought we played well," Walton said. "We hit the ball well. ... Were making the plays in the field, but we beat ourself. I hate losing. I hate beating ourselves. It stinks."

Arkansas starter Chenise Delce (16-2), who was named the SEC Pitcher of the Year earlier in the day, allowed a first-inning run but was stellar in the latter innings. She sent the Gators down in order in the fifth, sixth and seven innings after allowing two hits in the fourth but struck out Avery Goelz with runners on first and second to begin a run of 10 consecutive outs. She struck out Goelz to end the game for her seventh strikeout.

"Coming in, I knew I would have to take it one pitch at a time and focus on [hitting my] spots," Delce said in a postgame interview with ESPN2. "When you know that you have bats behind you, you just go out and do your best."

Florida's first-inning run came on a sacrifice fly by Charla Echols following a double by Kendra Falby and an infield single by Hannah Adams opened the game. Delce got a popout to shortstop before Echols flied out deep to center field to score Falby.

"I thought Chenise was exceptional," Deifel said. "Our defense played really well. It was huge keeping them to one there."

Delbrey, who was starting her first game of the tournament, then survived a two-on, no-out threat by Arkansas in the bottom half.

Sides and Hannah McEwen opened the Arkansas first with walks. Delbrey struck out Taylor Ellsworth looking for the first out. Gibson lined out to left for the second, and Delbrey (13-3) got out of the jam unscathed by striking out Gammill to end the threat.

Arkansas went 4-0 this season against Florida. The Razorbacks won a three-game series at Katie Seashole Pressly Stadium on April 22-24.

The Razorbacks and Tigers have never won an SEC Tournament championship.

The Bears and Ospreys combined for eight hits as both pitching staffs kept the opposing hitters quiet.

North Florida did its damage all in the fifth inning. An RBI single by Shannon Glover was followed by a fielder’s choice RBI from Logan Jackson and a UCA error to give the Ospreys a 3-1 lead.

In its first game of the day, UCA defeated Kennesaw State (23-28, 12-12), thanks to a Morgan Nelson three-run home run in the first inning.

Kayla Beaver allowed 1 run over 7 innings for the Bears, striking out 7.