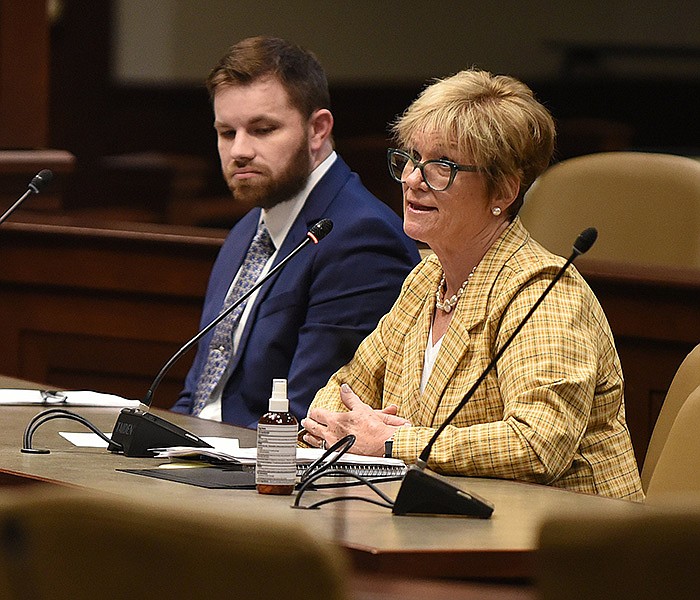 An auditor for Arkansas Legislative Audit on Friday questioned Gov. Asa Hutchinson's and Attorney General Leslie Rutledge's implementation of 2% raises for employees who are paid at their maximum-authorized salaries.

Kurt Cover, supervising senior auditor for Arkansas Legislative Audit, questioned whether raises in the form of one-time, lump-sum payments to more than 1,200 executive branch employees should be calculated as 2% of their total annual salaries.

In response, the state's personnel director, Kay Barnhill, told the Legislative Joint Auditing Committee that state law is silent on whether the lump-sum payments should be based on an employee's annual salary or should be a prorated portion of that employee's salary.

She said the state plans to make the lump-sum payments to employees, some of whom are paid up to their maximum-authorized salary, based on their annual salaries in the last pay period of the fiscal year that ends June 30.

In addition, Cover said 35 employees in the attorney general's office have received 2% of their annual salaries as a lump-sum payment and will exceed their line-item salary appropriation by a total of $37,546 as of June 30, in conflict with the Arkansas Constitution.

Brian Bowen, chief of staff for the attorney general, said he disagreed with Cover.

The 2% raises are bonuses for these employees, and the attorney general's office is complying with both state law and the Arkansas Constitution, he said.

On Feb. 17, Hutchinson announced that the state's executive branch employees would receive 2% cost-of-living raises, effective Feb. 6, to help offset rising inflation. At that time, state Department of Transformation and Shared Services spokeswoman Alex Johnston said the 2% raises would increase the average salary for these employees from about $46,588 a year to about $47,519 a year.

Barnhill subsequently informed the employees at the maximum of their pay grade that the lump-sum payments in their checks in late February were accidentally given at the wrong time and that they would have to pay back that money in their next paycheck in March.

Cover said a 2% salary increase was added to the base hourly rate of 22,453 executive branch employees, resulting in a first-year cost of $21.2 million to the state.

One-time, lump-sum payments totaling $1.28 million were made in error to 1,266 executive branch employees in late February rather than in the last pay period of the fiscal year that ends June 30, as is required by Arkansas Code Annotated 21-5-211, he said.

The Office of Personnel Management subsequently began a process for recouping the funds, and the majority of those employees had enough funds in the March 11 payroll disbursement, so the erroneous lump-sum payments could be recovered through reduction of net pay and taxes, Cover said.

He said 27 of the employees did not have sufficient payroll funds available in the March 11 disbursement, so the lump-sum payment was recovered over the next four pay periods, ending April 22.

Those employees are now scheduled to receive a one-time, lump-sum payment in the last pay period in the fiscal year, and it will not be a recurring payment in subsequent fiscal years, Cover said.

He said Hutchinson's news release about the 2% raises stated that "This 2 % increase is effective on February 6."

As a result, a proportionate amount would be 2% of salary for five months instead of the full 12 months, to be paid as a lump sum in the last pay period of the fiscal year or to be added to the base salary, Cover said.

Therefore, calculating lump-sum payments based on a full year's salary was not authorized by Hutchinson, Cover said.

But Barnhill said Hutchinson intended to make the lump-sum payments to employees, paid up to their authorized maximum salary, based on the employees' annual salaries.

Afterward, Hutchinson spokeswoman Shealyn Sowers said an exact date has not been determined for when the governor will make a decision of how much money executive branch agencies will be authorized to spend on merit raises for employees at the end of this fiscal year.

Employees at eight of the 10 non-executive branch agencies and offices will receive the one-time payment in the last pay period of the fiscal year, but employees at the attorney general's office and Game and Fish Commission received lump-sum payments in February, Cover said.

Thirty-six employees in the attorney general's office received a lump-sum payment, and the state Office of Personnel Management reversed the payments to these employees, consistent with the reversals for executive branch employees, who were paid a lump sum at that time, he said.

Cover said the attorney general's office subsequently requested that the lump-sum payments be reinstated as a cost-of-living increase, saying that "AG's discretion" provided the authority to make these payments.

On March 7, the state Office of Personnel Management manually entered into the state's computerized accounting system the lump-sum payments for 35 employees based on a spreadsheet provided by the attorney general's office and backdated the payments to Feb. 6, he said.

All 35 employees received a full 2% of their current salary, totaling $57,127, as a lump-sum payment, and they will exceed their line-item salary appropriation by $37,546 as of June 30 in conflict with Arkansas Constitution Article 16, Section 4, Cover said. In addition, one employee received 2% added to the base salary, he said.

He said Arkansas Legislative Audit could not identify authority for an "AG's discretion" lump-sum salary increase that would allow employees to be paid in excess of their maximum line-item salary appropriation.

A Legislative Joint Auditing Committee co-chairman, Rep. Richard Womack, R-Arkadelphia, said it sounds like the attorney general's discretion is "made up."

But Bowen told state lawmakers that the attorney general's office disagrees with attorneys for Arkansas Legislative Audit on this matter and that reasonable attorneys can disagree.

The attorney general's office is exempt from the state's Uniform Classification and Compensation Act, he said.

Bowen said the attorney general's office has historically granted pay raises to employees and not exceeded the line-item maximum salary, and it also granted bonuses to employees.

The attorney general's office is not prohibited from giving bonuses to its employees and has followed state law and the Arkansas Constitution and stayed within its appropriation for salaries, he said.

"There is no definition of salary in the code," Bowen said.

"We are not exceeding our salary and line-item maxes," he said, and "we have more than enough in our appropriation to award the bonuses this year."

Afterward, state Sen. Jason Rapert, R-Conway, said in a written statement that "as usual, it appears that Leslie Rutledge is again thumbing her nose at the Legislature and using the people's money as she sees fit."

"The General Assembly sets the salaries of all state employees and no one has the authority to pay more than what we have laid out in law," he said.

Rutledge spokeswoman Amanda Priest said Friday in a written statement that "since taking office, Attorney General Rutledge has made it a priority to be a conservative steward of taxpayers' money, doing more with less as our annual expenditures show."

"In February, the attorney general gave eligible staff a 2% raise, similar to what she and other constitutional officers have done in previous years," she said. "Only those employees whose salaries were at, or near, their line-item maximum were given a one-time bonus which does not impact their salary."

Rutledge and Rapert are two of the six Republican candidates running for lieutenant governor in the May 24 primary.

Cover told lawmakers that the Arkansas Game and Fish Commission made lump-sum payments to two employees for whom the 2% salary increase would raise their total salary above the maximum for their pay grade in February.

Although the commission authorized certain cost-of-living adjustments during its Feb. 25 meeting, based on its minutes, it did not authorize lump sum-payments to be made based on their entire year's salary, he said.

It appears the commission should calculate lump-sum payments based on a proportion of each employee's annual salary from Feb. 6 through the end of the fiscal year on June 30 -- not an entire year's annual salary -- Cover said.

In response, commission Chief Fiscal Officer Emily Shumate wrote in a letter dated April 27 to Cover that the Arkansas Game and Fish Commission intended for the cost-of-living lump-sum payments to include 12 months of earnings for those employees. 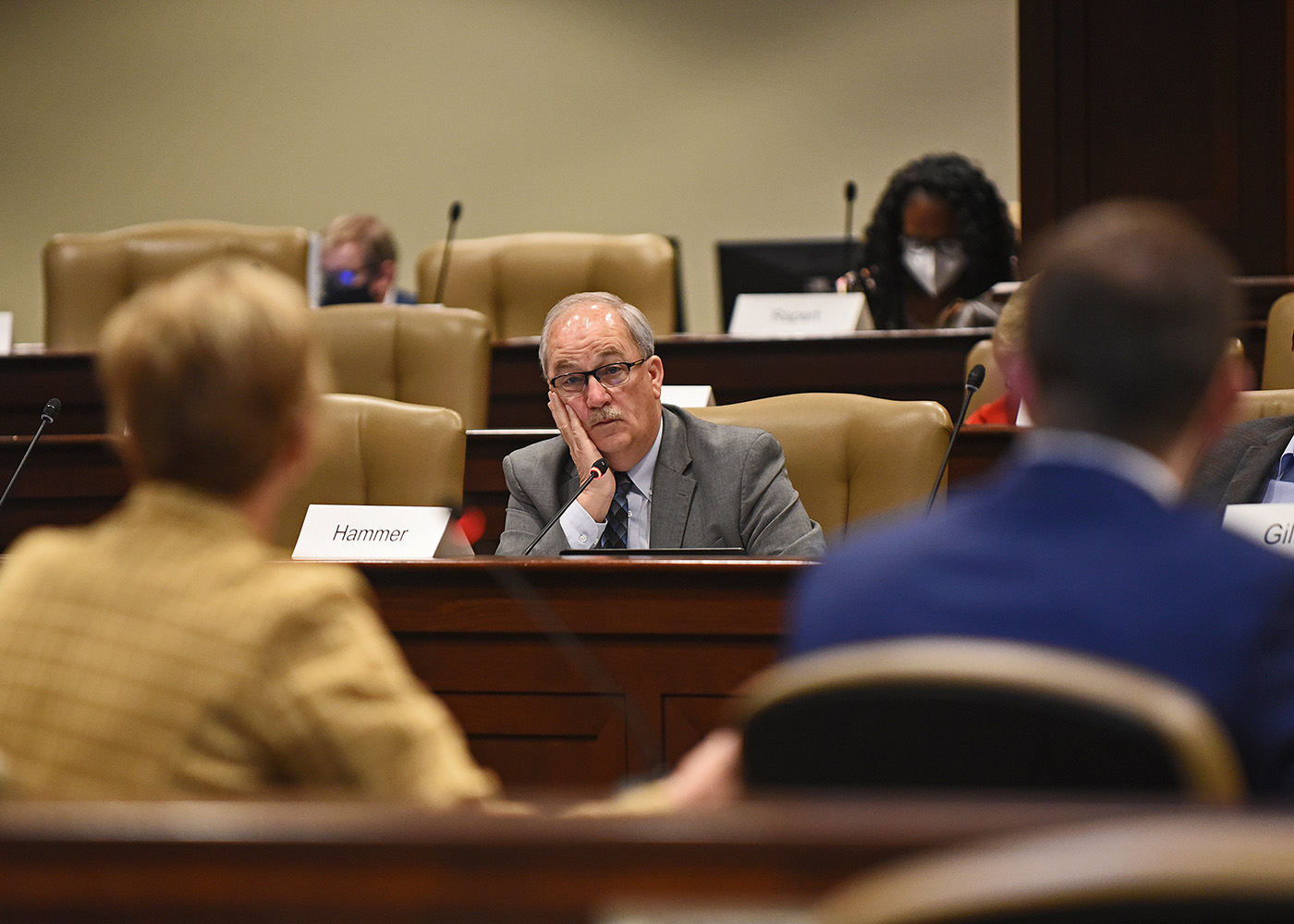