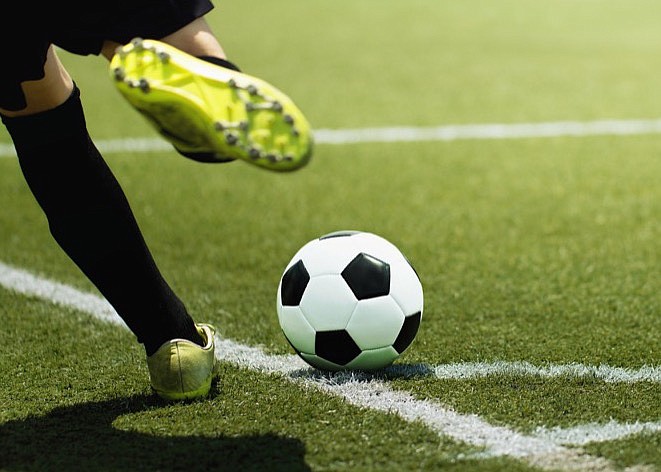 Foot of a soccer player and ball on the field, kicking a corner kick soccer tile / Getty Images

CONWAY -- Failure had been rare for the two teams battling for a spot in the Class 6A girls soccer state semifinals Friday morning.

Bentonville began the day with one loss in its 19 games this season, dropping its regular-season finale after clinching the 6A-West title. North Little Rock had run off 15 games unbeaten since March 17.

Their matchup in the state quarterfinals made clear which team was the superior.

The Tigers were in full control throughout at John McConnell Stadium, easing their way past the Charging Wildcats with a 3-0 win. Sophomore Kayla Hurley scored twice and set up the passage of play that led to Abby Armstrong's back-breaking goal in the early minutes of the second half.

"The main thing is we've been successful all year doing certain things," Bentonville Coach Steve Porter said. "We don't need to divert from those core principles now. We just need to ... keep the ball, move off the ball, be brave in possession, be defensively smart. Just continue to be consistent."

The Tigers had one-way traffic headed toward the North Little Rock net in the opening 20-plus minutes. The Charging Wildcats were willing to absorb Bentonville's pressure, but it felt like a matter of time until the Tigers broke the deadlock.

In the 23rd minute, they did precisely that.

Bentonville (17-1-2) played a through-ball from the midfield toward Hurley, who bulled one defender to the turf before warding off another challenge. She then ripped a shot just inside the left post to put the Tigers up 1-0.

Although Bentonville continued its onslaught in the final third up until halftime, it wasn't until after the break that the Tigers doubled their lead.

North Little Rock (12-5-5) attempted to blast the ball away from the top of its 18-yard box, but an errant clearance -- thanks to pressure from Bentonville forward Star Chesshir -- bounced to the middle of the field.

Armstrong collected and rounded the Charging Wildcats' keeper, poking the ball into a wide-open goal.

With a 2-0 lead, it was just a matter of seeing out the final 35-plus minutes.

"They're definitely the best side we saw this year," North Little Rock Coach Michael Klucher said of the Tigers. "I really felt as though we held our own well and their moments came very few. But they were able to do a good job of making those chances [count]."

Leaving no doubt, Hurley added Bentonville's third score with 30 seconds to play. She spun and fired from the top of the box, finding the nylon with her right foot again.

The product of a dominant campaign is expectations. And given that the Tigers have won all but two games by multiple goals since the start of April, they're warranted.

Now it's a matter of living up to them.

"When we've set ourselves up this way, it's a problem we've created for ourselves," Porter said. "But it's a good problem."

Reigning Class 6A champion Fayetteville (11-2-2) gritted its way to the victory.

Both teams provided plenty of danger in the first half, but it was the Bulldogs who got what wound up being the only goal. A corner kick toward the near post found a lurking Jayden Tyler and the junior forward flicked it over the line in the bottom right corner.

Conway (11-4-3) pushed for an equalizer out of the locker room, with Dekeria Carter and Tristyn Pavatt threatening the Fayetteville backline. What looked to be the tying goal, however, was a shot by Pavatt that sailed over the crossbar.

The 6A-Central champion Lady Bears kept their unbeaten season rolling with a comfortable victory in their postseason opener.

Northside (11-0-5) scored the opener through sophomore Rosa Ceteno, who headed in a cross. She scored later on a header for a second goal off a Northside corner kick.

Elena Ceteno also scored a header off a corner kick, and senior Brianna Lopez fired home a left-footed goal to turn back Rogers (12-5-1).

Bentonville West (15-6) got within one victory of making a return trip to the state finals after finishing as runner-up a year ago.

The Lady Wolverines grabbed the lead on Kate Carter's early goal and took their 1-0 advantage into intermission. Little Rock Central (10-6-2) tied things up after halftime as Maria Schuller capitalized on a through ball from near midfield.

The Lady Wolverines eventually found the winner with 20 minutes remaining as sophomore Jordan Hartline headed in the go-ahead score.