Bill in Missouri targets dispute of 2 drugs’ use 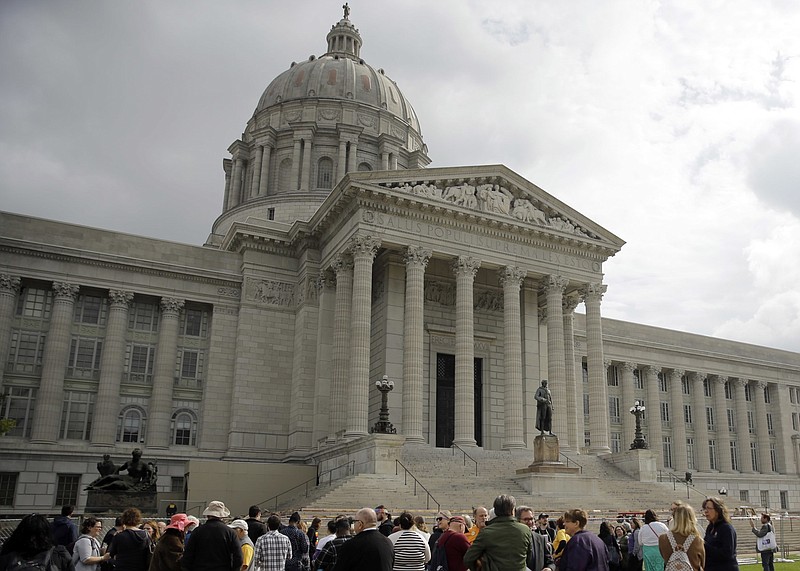 People attend a rally outside the Missouri state Capitol in Jefferson City, Mo., in this March 31, 2016 file photo. (AP/Jeff Roberson)

The measure, which passed in the House on a 130-4 vote, was tucked into a bill related to professional licensing. After gaining approval in both chambers, the bill now heads to Gov. Mike Parson's desk.

According to its language, the bill would prevent state medical licensing boards from punishing or taking away the medical licenses of doctors who "lawfully" prescribe the two drugs. And it would prevent pharmacists from contacting doctors or patients "to dispute the efficacy of ivermectin tablets or hydroxychloroquine sulfate tablets for human use" unless the doctors or patients ask about the drugs' effectiveness.

Republican Sen. Rick Brattin told reporters Thursday that he added the amendment after he spoke with doctors who worried that they would lose their medical licenses for prescribing the drugs. Brattin, who said he previously bought ivermectin for covid-19 but has never taken it, described the drug as "politicized."

"Unfortunately, because of the politicization of those two drugs, [doctors are] being targeted," he said. "I wanted to protect them from that."

The bill, specifically Brattin's amendment, swiftly drew criticism on social media from people who pointed to the fact that the Food and Drug Administration has not approved ivermectin for treating covid-19. The drug is authorized for humans to treat infections caused by parasitic worms, head lice and skin conditions such as rosacea.

The agency has received multiple reports of people who have been hospitalized after taking ivermectin intended for livestock, according to its website.

"The Missouri legislature has chosen to 'own the libs' by issuing a gag order against every pharmacist in this state from offering their medical opinion on taking either one of those medications -- even if it could kill their patient," former U.S. House candidate Lindsey Simmons wrote on Twitter.

Rep. Patty Lewis, a Democrat who served on the committee that handled the bill, told reporters Thursday that Democrats agreed to the language in the measure to satisfy a group of hard-right conservatives in the Senate.

She said the parts of the bill relating to the two drugs will not change anything in the medical community, adding that medical licensing boards already would not punish a doctor for prescribing a drug lawfully.

"This language, with a few buzzwords, is to keep some difficult, obstinate, conservative senators quiet," she said. "It's not necessary; it's not needed. It's 'do nothing' language only to make sure the bill does not fail in the Senate."

Elsewhere, Massachusetts said Thursday that it had agreed to pay $56 million to resolve claims that the leaders of a state-run nursing home for military veterans showed deliberate indifference during a coronavirus outbreak that was linked to the deaths of 84 residents early in the pandemic.

An independent investigation had painted a picture of chaos at the Holyoke Soldiers' Home when the virus began sweeping through it in March 2020. Investigators criticized the leaders for combining veterans from two locked dementia units into one unit, crowding those who were infected or who showed symptoms with those who did not have symptoms.

A social worker said it "felt like it was moving the concentration camp, we were moving these unknowing veterans off to die." A nurse described it as "total pandemonium."

Gov. Charlie Baker of Massachusetts, accepting the findings of the investigation in June 2020, called them "nothing short of gut-wrenching."

In the settlement, which came after months of intensive negotiations with the governor's office, neither state officials nor those who ran the home acknowledged any wrongdoing or apologized for the treatment of the veterans there, lawyers for the veterans' families said.

Nevertheless, Linda McKee, who lost her father, James Miller, a 96-year-old World War II veteran, said she was glad to see the state "finally accept some responsibility for what happened."

Another group of 84 veterans who were infected but survived past June 23, 2020, will be paid no less than $10,000, with an average award of $20,000, the lawyers said, adding that the payments to both groups would not be reduced by legal fees.

A former U.S. attorney for Massachusetts, Donald Stern, will administer the claims fund and make awards based on a review of each claimant's circumstances.

The settlement must still be approved by a federal judge and funded by the state Legislature.

Baker said he would file legislation in the coming weeks to seek $56 million for the claims fund. Once the settlement is complete, Aleo and Lesser said, the families who had filed a class-action lawsuit against four leaders of the home and against the state's secretary of veterans' services in July 2020 will drop their case.

Lesser called the resolution "fair and just" and said it would prevent protracted litigation.

"The COVID-19 outbreak at the Holyoke Soldiers' Home was a terrible tragedy," Baker said in a statement Thursday. "While we know nothing can bring back those who were lost, we hope that this settlement brings a sense of closure to the loved ones of the veterans."

The independent investigation, led by former federal prosecutor Mark Pearlstein, was especially critical of the decision to crowd veterans into one ward -- a move that one employee described as "the most insane thing I ever saw in my entire life."

The report detailed other errors, including the rotation of staff members between wards, which accelerated the spread of the virus.

It said that decisions made by the facility's superintendent, Bennett Walsh, were "utterly baffling from an infection-control perspective" and inconsistent with the home's mission to treat veterans with "honor and dignity."

Walsh's supervisor, Francisco Urena, resigned as the state's secretary of veterans' services in anticipation of the report, telling the WCVB television station: "I'm very sorry. I tried my best."

Information for this article was contributed by Kacen Bayless of the Kansas City Star (TNS) and Michael Levenson of The New York Times.

Print Headline: Bill in Missouri targets dispute of 2 drugs’ use