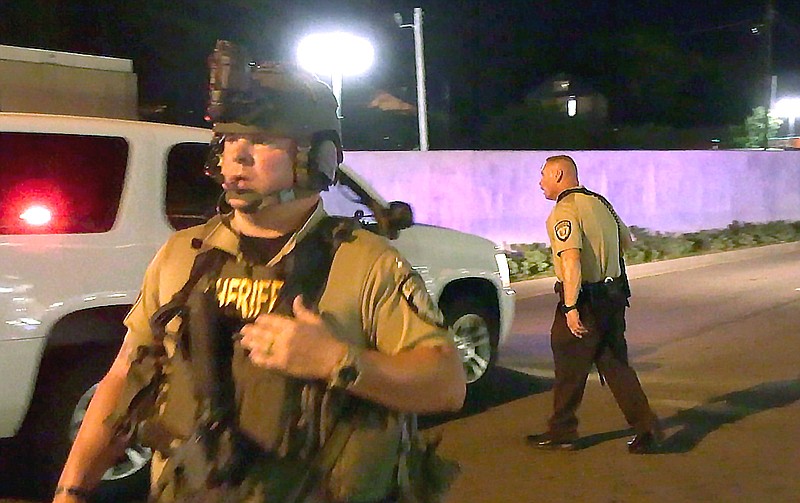 A Garland County sheriff's deputy, right, converses with another officer outside the Hot Springs Convention Center on Thursday night. - Photo by Andrew Mobley of The Sentinel-Record

His wife used to teach in the district, and he said this graduating class was the first class she ever taught.

The couple was upstairs with some of the students when they heard "a bunch of loud booms," Pelton said, and then heard screaming and saw "people running in different directions."

"We took pictures with several of the seniors that graduated and it didn't seem like anybody was arguing inside or anything. Everything seemed completely normal," Pelton said. "It seemed to happen very quickly."

Pelton said he had no idea at the time there was a fight going on outside. After hearing the gunshots, he said he made his way downstairs, where he searched for people who needed help.

"There were a couple people lying on the ground that I wanted to check on," he said. "They both had a couple gunshot wounds to their legs, so I tried to help them and then I tried to move on to try to find if there was anybody else that needed assistance."

While he was helping some of the victims, Pelton said he was thinking about "nothing, really."

"I was just trying to find people that needed help as there weren't any paramedics that had arrived yet," he said. "The fire department wasn't there yet. There were a lot of police around, but there was just so much chaos going on that they were trying to get control of the scene."

While he was helping, it didn't occur to him that the shooter could still be outside, he said. By that time, the alleged shooter, Charles Johnson, 25, had already fled.

"Afterward, it's kind of hard to go to sleep," Pelton said. "Just because of the adrenaline of it all, looking back on it and kind of realizing that the shooting could have even still been going on when I went out there. It really never occurred to me that it was still active.

"Fortunately, it all worked out, but it definitely could have been different."

The situation was especially unfortunate since the reason for the gathering was supposed to be a "good occasion," Pelton said.

"I'm just glad that none of the students were hurt," he said. "They're real good kids and they didn't deserve to have their moment that they've been looking forward to their whole lives to be tainted like that."