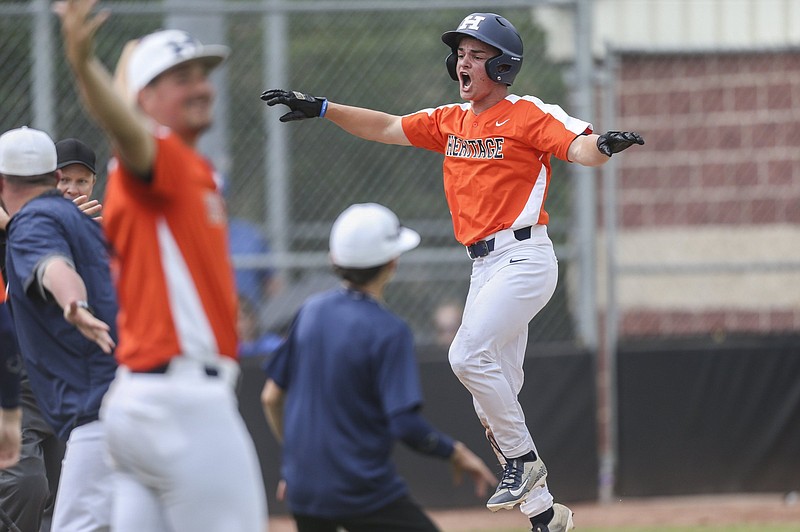 Bennett Crafton (right) of Rogers Heritage celebrates with his team Friday after scoring a run during a 9-8 victory over Rogers at the Class 6A state baseball tournament in Springdale. More photos at arkansasonline.com/514boys6a/. (NWA Democrat-Gazette/Charlie Kaijo)

SPRINGDALE -- There's something much more satisfying than beating your rival during the regular season.

That's the thrill of eliminating your rival in postseason play.

Jack Hamm hit a grand slam in the sixth inning and Rogers Heritage held on to defeat Rogers 9-8 on Friday in the quarterfinals of Class 6A state baseball tournament at Bulldog Field. Hamm's home run to left field capped a six-run, sixth-inning rally for Heritage (20-11) against the Mounties (24-6), who won the Class 6A state championship last season.

The home run was the third of the season for Hamm and his first-ever grand slam, going all the way back to Little League.

"I was in the on-deck circle and I felt something was going to happen," Hamm said. "I got in the box very relaxed and I said to myself, 'See the fastball.' I got the fastball, and that's all she wrote."

Rogers Heritage Coach Brian Walker probably had the worst vantage point of Hamm's grand slam after getting ejected for arguing two balk calls in the fifth inning that led to runs for Rogers. Walker watched the final two innings well beyond the right-field fence where the Heritage bus was parked.

"They confined me to my bus and I was looking out the window when he hit it," Walker said. "The wind was blowing in, but I felt like it had a chance. Talk about never quitting. It was just pure jubilation."

Rogers overcame an early three-run deficit to go ahead 6-3 before the War Eagles came to bat in the top of the sixth inning. Rogers recorded the first out before six consecutive batters reached base for Heritage, which spilt with the Mounties during the regular season.

In the third inning, Heritage and Rogers each scored three runs on four hits. Rogers eased ahead 6-3 before Heritage got six run in the sixth and held on to end the season for the Mounties.

"Rogers is a well-coached team and they won it last year, so you have to knock off the best," Walker said. "We took some punches and we gave some back. Our guys didn't quit and I'm so proud."

Bulza entered the game as a pinch-runner for Stephon Gryskiewicz, who led off the seventh with a single and moved to second on Tony Woodie's sacrifice bunt. Hutchens delivered his hit one out later, and Bulza just missed being tagged at the plate.

Hayden Nall then secured the win as he retired Catholic (21-7) in order in the seventh.

Bentonville (22-10) scored five runs in the third, highlighted by a two-run double by Woodie and a two-run home run by Drew Wright, and had a 6-1 lead before Catholic scored a run in the fourth and tied it in the fifth with two-run singles by Will Bunda and Grant Hodge.

Rainey pitched the first inning and struck out one in a short 16-pitch outing. Hill took over and only allowed a fifth-inning single as he struck out eight batters and walked one in a 79-pitch performance.

Conway did all of its scoring in the third inning. Samuel Gregg walked, went to second on Logan French's single and came home on a double by Rainey. Matthew Glover followed with a groundout to drive in French, and Zachary Szuba added an RBI single.

Ethan Fender and Cooper Dossett hit back-to-back home runs, and Ross Felder threw a two-hitter as Har-Ber advanced to the semifinals with its win on its home field.

That was all the offense Felder needed as he struck out nine and walked one in an 85-pitch performance. Cabot (20-7) had its only serious scoring threat in the first as Hayden Prewitt reached on an error and Kolby Webb hit a double off the left-field fence, but Prewitt was thrown out at the plate.

Har-Ber's other run came in the fifth when Ross singled and scored on a single by Dossett, who was thrown out while trying to stretch it into a double.