Casket dropped as journalist’s funeral breaks out in chaos by JOSEF FEDERMAN THE ASSOCIATED PRESS | May 14, 2022 at 4:19 a.m. 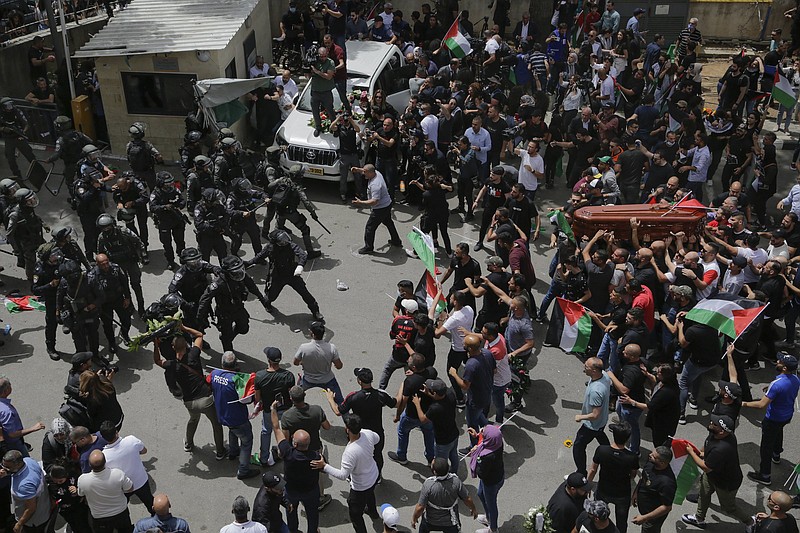 JERUSALEM -- Israeli riot police on Friday pushed and beat pallbearers at the funeral for slain Al Jazeera journalist Shireen Abu Akleh, causing them to briefly drop the casket in a surprising start to the procession.

The scenes of violence were likely to add to the sense of grief and outrage across the Arab world that has followed the death of Abu Akleh, who witnesses say was killed by Israeli troops Wednesday during a raid in the occupied West Bank. They also illustrated the deep sensitivities over east Jerusalem -- which is claimed by both Israel and the Palestinians and has sparked repeated rounds of violence.

Abu Akleh, 51, was a household name across the Arab world, synonymous with Al Jazeera's coverage of life under Israeli rule, which is well into its sixth decade. A 25-year veteran of the satellite channel, she was revered by many Palestinians as a local hero.

Thousands of people, many waving Palestinian flags and chanting "Palestine! Palestine!" attended the funeral. It was believed to be the largest Palestinian funeral in Jerusalem since Faisal Husseini, a Palestinian leader and scion of a prominent family, died in 2001.

Ahead of the burial, a large crowd gathered to escort her casket from an east Jerusalem hospital to a Catholic church in the nearby Old City. Many of the mourners held Palestinian flags, and the crowd began shouting, "We sacrifice our soul and blood for you, Shireen."

Shortly after, Israel police moved in, pushing and clubbing mourners. As the helmeted riot police approached, they hit pallbearers, causing one man to lose control of the casket as it dropped toward the ground. Police ripped Palestinian flags out of people's hands and fired stun grenades to disperse the crowd.

Al Jazeera correspondent Givara Budeiri said the police crackdown was like killing Abu Akleh again. "It seems her voice isn't silent," she said during a report by the broadcaster.

An Israeli official said the details of the funeral had been coordinated with the family ahead of time to ensure it would run smoothly, but that "masses began gathering around the hearse of Shireen Abu Akleh and chaos ensued," preventing the procession from going along its intended route. The official spoke on condition of anonymity in line with regulations.

Earlier this week, Abu Akleh's brother, Tony, said the original arrangement was to move the casket in a hearse from the hospital to the church, and that after the service, it would be carried through the streets to the cemetery. It was not immediately clear why those plans had changed and pallbearers emerged from the hospital carrying the casket.

Al Jazeera said in a statement that the police action "violates all international norms and rights."

"Israeli occupation forces attacked those mourning the late Shireen Abu Akhleh after storming the French hospital in Jerusalem, where they severely beat the pallbearers," it said. The network added that it remains committed to covering the news and will not be deterred.

The focus should be "marking the memory of a remarkable journalist who lost her life," Psaki said. "We regret the intrusion into what should have been a peaceful procession."

U.S. President Joe Biden was asked whether he condemns the Israeli police actions at the funeral, and he replied: "I don't know all the details, but I know it has to be investigated."

Information for this article was contributed by Majdi Mohammed, Fares Akram, Edith M. Lederer and Aya Batrawy of The Associated Press. 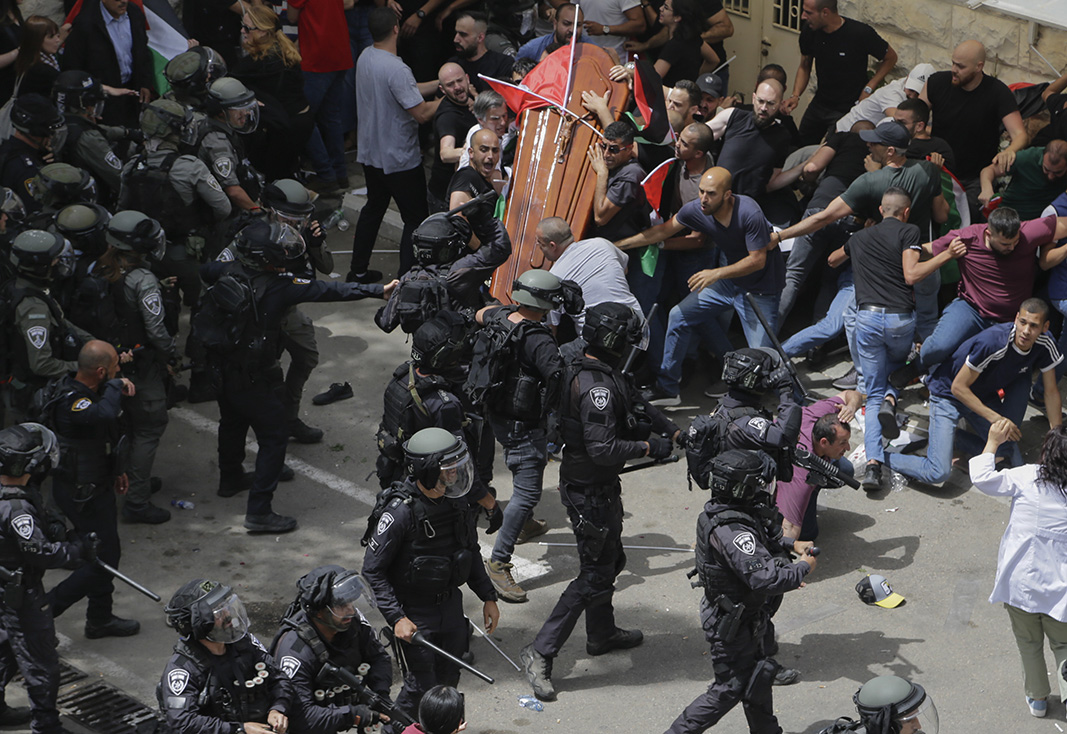 Israeli police confront mourners Friday as the casket of slain Al-Jazeera journalist Shireen Abu Akleh is carried during her funeral in east Jerusalem. Abu Akleh, a Palestinian-American reporter who covered conflict in the Mideast for more than 25 years, was fatally shot Wednesday during an Israeli military raid in the West Bank town of Jenin. More photos at arkansasonline.com/514jerusalem/. (AP/Maya Levin)