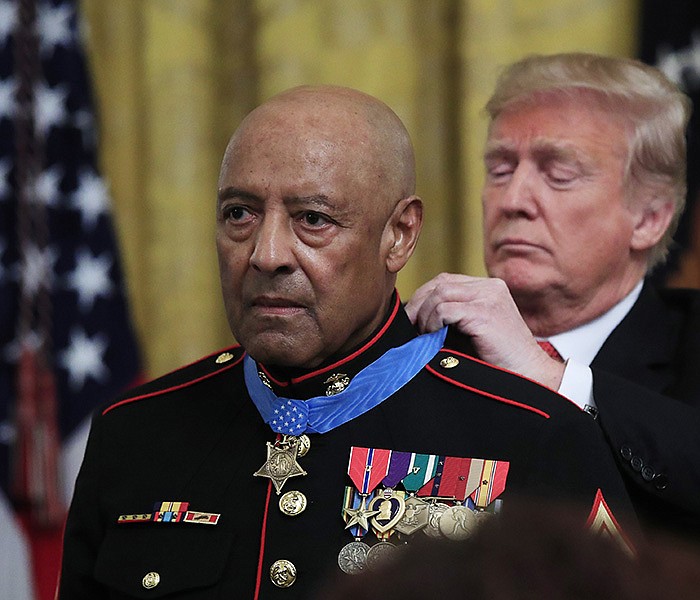 Then-President Donald Trump presents the Medal of Honor to retired U.S. Marine Corps Sgt. Maj. John Canley in October 2018 during an East Room ceremony at the White House. Canley, who was born in Caledonia and grew up in El Dorado, died Wednesday. (AP/Manuel Balce Ceneta)

A Medal of Honor recipient from Arkansas died Wednesday after a decades-long battle with cancer.

Retired Sgt. Maj. John L. Canley died in Bend, Ore., with his family at his bedside, according to the U.S. Marine Corps. He was 84.

Born in the Union County community of Caledonia on Dec. 20, 1937, Johnny Lee Canley grew up in nearby El Dorado. In 1953, after watching the John Wayne movie "Sands of Iwo Jima," Canley enlisted in the Marine Corps at age 15 using his brother's paperwork.

According to The Washington Post, citing the Congressional Medal of Honor Society, Canley was the first living Black Marine to receive the nation's highest military decoration for valor.

Canley was awarded the Medal of Honor in 2018 for his actions in 1968 during the battle of Hue City, Vietnam.

The medal recognizes Canley's heroic service between Jan. 31 and Feb. 6, 1968, the first days of the Tet Offensive. The coordinated military attacks, which coincided with Vietnam's Lunar New Year holiday, was one of the Vietnam War's key turning points.

While serving as the gunnery sergeant for Alpha Company, 1st Battalion, 1st Marine Regiment, Canley and his Marines fought off multiple attacks as they patrolled the city streets to relieve another company of Marines.

According to the award citation, Canley repeatedly rushed across gunfire-swept terrain to carry wounded Marines to safety during firefights with the enemy forces. After his company commander was severely wounded, Canley took command of his company for three days and led the Marines through battle in Hue City.

Under his leadership, Alpha Company destroyed fortified enemy positions throughout the city as Canley continued to carry wounded Marines to safety.

On Feb. 4, 1968, Canley led a group of Marines into an enemy-occupied building to eliminate their stronghold.

In an effort to draw out the enemy and expose their position, the 6-foot, 4-inch Canley moved into an open area, attracting machine-gun fire.

"His Marines located and destroyed the threat and completely took over the building from the enemy," according to a news release from the Corps. "Two days later, during a fierce firefight at a hospital compound, Sgt. Maj. Canley twice scaled a wall in full view of the enemy to carry wounded Marines to safety."

Besides the Medal of Honor, Canley also was awarded the Bronze Star with Combat "V," the Purple Heart, the Navy and Marine Corps Commendation Medal with Combat "V" and the Combat Action Ribbon.

"The actions in the face of danger Sgt. Maj. Canley took are incredible and remarkable," said Sergeant Major of the Marine Corps Troy Black. "Sgt. Maj. Canley was a leader and a war-fighter who undoubtedly contributed to the battles won in Vietnam. His first priority was and has always been his Marines -- a true example of Semper Fidelis. I'm saddened by the loss of such a great Marine, yet I'm grateful for the legacy he established for generations of warriors."

"The only thing I was doing was just responding," Canley said in a video the Marine Corps posted in 2018 on YouTube at https://bit.ly/3Ncxgjx. "The Marines, the young Marines, it shows them that it's not do as I say, it's do as I do. Just being that close to them brings motivation to them. My legacy was about taking care of Marines."

"During firefights, when we'd all be hugging Mother Earth, he'd be standing up directing us," John Ligato, who fought in the battle, says in the video. "And I think if you talk to every Alpha Company Marine, we're amazed that he was never shot."

In another video, Canley said, "My Marines, because they believed in me, they would follow me to death, and I had no doubt about that."

Normally, there's a five-year time limit to award the Medal of Honor, but Congress made an exception in Canley's case.

Presenting the Medal of Honor to Canley in 2018, President Donald Trump said Canley was responsible for saving the lives of 20 Marines in the Battle of Hue City. Trump said Canley's company included about 150 Marines, while 6,000 Communist fighters were in Hue City.

"In the days that followed, John led his company through the fog and rain, and in house-to-house -- very vicious, very hard -- combat," said Trump. "He assaulted enemy strongholds, killed enemy fighters and with deadly accuracy, did everything you had to do. He raced into heavy machine-gun fire on many occasions, all to save his fellow Marines. In one harrowing engagement after another, John risked his own life to save the lives of those under his command."

Canley retired from the Marine Corps in 1981 and settled in Oxnard, Calif.

In a rare interview with USA Today, Canley said the Medal of Honor "means a lot to me."

"Mostly for my Marines because we've had to wait 50-plus years to get any kind of recognition," Canley said. "It's not about me. It's about the Marines who didn't [receive] the appropriate recognition when we got home."

Sgt. Alfredo Cantu Gonzalez of Texas, who died in the Battle of Hue City, was posthumously awarded the Medal of Honor in 1969.

Canley's legacy will live on through the USS John L. Canley, currently preparing for its christening scheduled for June 25 in San Diego, according to the Marine Corps. The ship is a 90,000-ton expeditionary sea base that will be deployed in the western Pacific.

Canley will be buried with full military honors at Arlington National Cemetery at a later date.

Since the Medal of Honor was first presented in 1863, 3,468 individuals have been honored, according to the Encyclopedia of Arkansas. Twenty-five of those recipients have Arkansas connections.

Originally presented for combat and noncombat heroism, the medal is today presented to a member of the military who "distinguishes himself or herself conspicuously by gallantry and intrepidity at the risk of his or her life above and beyond the call of duty while engaged in action against an enemy of the United States," according to the encyclopedia.

He leaves behind several siblings, three children, a stepson and two grandchildren.