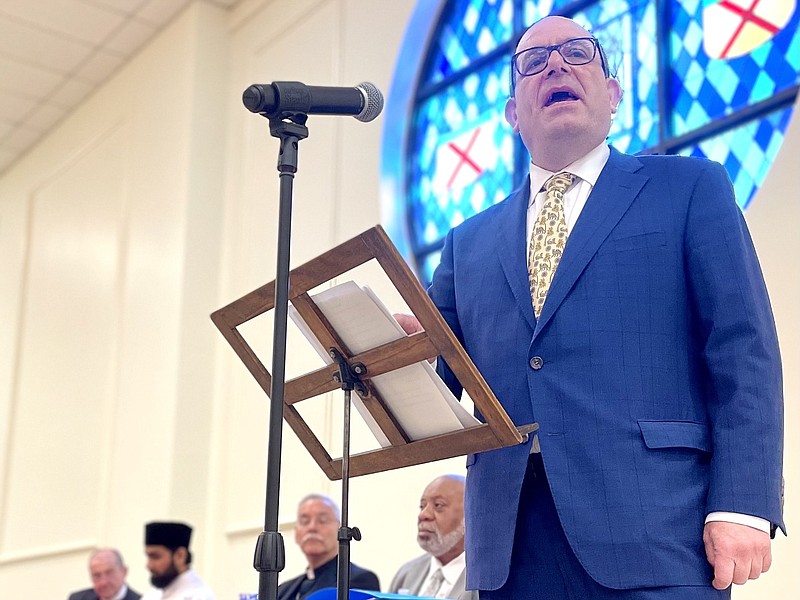 Little Rock religious leaders laid aside their theological differences last week, gathering at the Cathedral of St. Andrew's McDonald Hall on May 6 to pray for peace, shalom and salaam.

The interfaith breakfast came one day after the National Day of Prayer and featured messages from Bishop Anthony Taylor of the Catholic Diocese of Little Rock, Bishop Larry Benfield of the Episcopal Diocese of Arkansas, Rabbi Barry Block of Congregation B'nai Israel, Pastor Marion Humphrey of Allison Memorial Presbyterian Church and Imam Mohammed Nawaz of the Madina Institute & Mosque.

With war raging in Ukraine and political tensions heightened in the United States, organizers picked a timely theme: "Peace in Our Families, Peace in Our Communities & Peace in Our World."

The organization sponsoring the event, the Saint Thomas More Society of Arkansas, brings together members of the legal profession and is named after a Catholic martyr who is sometimes referred to as the patron saint of politicians, statesmen and lawyers.

While they nibbled on breakfast sandwiches and sipped hot coffee, Block delivered a blistering rebuke of the powers that be.

"Racism, falsely declared dead, is so pernicious that it inspires lawmakers to silence hard truths of American history in public schools. White supremacy is a potent public political force right out in the open. The majority in our Arkansas General Assembly targets transgender youth, preferring their alarming suicide rate to the only scientifically verified antidote, which is gender affirming health care. American democracy has degenerated into conflict around family tables, voter suppression, rampant distrust, and a violent insurrection at our nation's Capitol," he said.

Racism and injustice were also themes of Taylor's sermon.

Pointing to what he called the "deep, systemic injustices that African Americans continue to suffer in our society," Taylor said, "there will be no lasting peace in our community until these injustices are addressed."

"If you want peace, work for justice," he said, later quoting a prayer for peace that had been delivered by Pope Francis.

Taylor and others decried Russia's war on Ukraine.

Nawaz, who also denounced the invasion, stressed the importance of nonviolence, reciting words attributed to the Prophet Muhammad: "You will not enter paradise until you believe and you shall not believe until you love one another."

"Every single prophet who came to this world from Adam all the way to Jesus and Muhammad, may peace and blessings be upon all of them, they came to give life. They came to construct, they came to build, they came to establish peace and justice and equality in the land."

Humphrey, who has worn judicial as well as liturgical robes, quoted from Philippians 4:4-7: "Rejoice in the Lord always; again I say, Rejoice. Let your gentleness be known to everyone. The Lord is near. Do not worry about anything, but in everything by prayer and supplication with thanksgiving let your requests be made known to God. And the peace of God, which surpasses all understanding, will guard your hearts and your minds in Christ Jesus."

Benfield, reading from the Book of Common Prayer, asked God to grant wisdom to the nation's leaders so "that there may be justice and peace at home, and that, through obedience to your law, we may show forth your praise among the nations of the earth."

Jim Goodhart, president of the Saint Thomas More Society of Arkansas, said his organization is comprised of lawyers who try to follow More's example.

More, a devout Catholic, was executed by Henry VIII after refusing to recognize the king as the supreme head of the Church of England.

"He died the King's good servant but God's first. That example is needed in our world today," Goodhart said afterward.

The society will gather again Oct. 7 for the 28th annual Red Mass, which is held each year for members of the legal profession. The vestments worn by the officiants, traditionally, are red.