The world in brief: Man stabs 5 people on German train 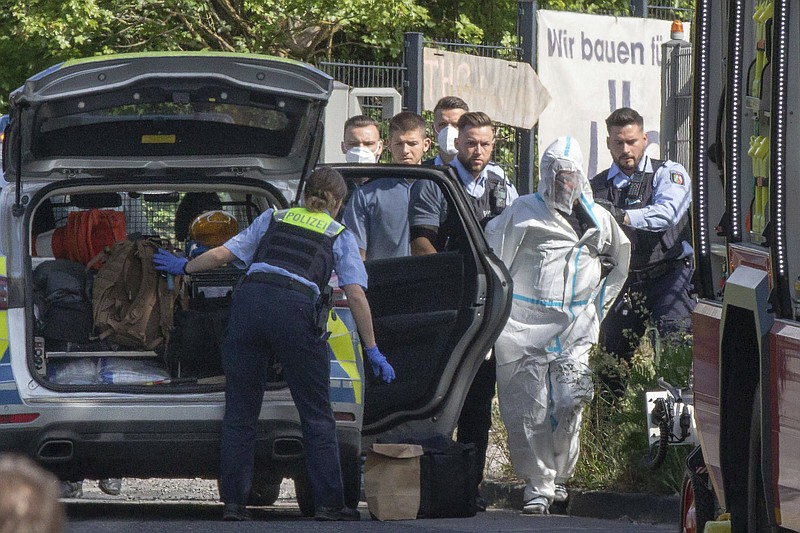 BERLIN -- An off-duty police officer and two other passengers on a regional train in Germany overpowered an Iraq-born man who wounded five people, including the officer, with a knife Friday, authorities said.

A top law enforcement official said the 31-year-old attacker had been investigated for possible Islamic extremism while living in a refugee hostel in 2017, but that the motive for the train attack hadn't been determined.

Four of the injured were treated in a hospital for wounds in their hands or face and head, while one victim had been stabbed in the shoulder blade. None were considered in life-threatening condition. The attacker was also injured and taken to a clinic.

The train had just pulled out of the station at Herzogenrath near the border with the Netherlands and was heading for the western German city of Aachen at 7:42 a.m. local time when the man began attacking fellow passengers "randomly and arbitrarily," state Interior Minister Herbert Reul said. He praised the courage of the 60-year-old off-duty officer and passengers who had "prevented worse harm."

He described the attack as "a gruesome crime that was stopped in an enormous act of courage."

VATICAN CITY -- Pope Francis, who has been using a wheelchair because of a bad knee, is going ahead with plans to visit Canada this summer so he can apologize in person for abuse suffered by Indigenous people at the hands of the Catholic church.

The Vatican on Friday announced that Francis will head to Canada on July 24 and visit Edmonton, Quebec and Iqaluit, a small town in that country's far north. About half the population of Iqaluit is Inuit. The pope leaves Canada on July 29, arriving the next day in Rome.

Last month, Francis made a historic apology for abuses in Canada's church-run residential schools and expressed "sorrow and shame" for the lack of respect for Indigenous identities, culture and spiritual values.

He said then that he wanted to go to Canada to deliver the apology personally to survivors of misguided Catholic missionary zeal.

Vatican spokesman Matteo Bruni said Francis was "accepting the invitation of the civil and ecclesiastical authorities and the Indigenous communities" in making what the Holy See termed an "apostolic journey."

The Vatican said details of the Canada trip would be made public in the coming weeks. Edmonton Archbishop Richard Smith said the pope will visit the site of at least one former residential school.

NEW DELHI -- A fire broke out Friday evening in a four-story commercial building in the Indian capital, killing at least 27 people and leaving several others injured, the Fire Department control room said.

Dozens of people were rescued from the building, which contains mainly shops, the control room said. The building is located in the Mundka area in western New Delhi.

The Press Trust of India news agency said 12 people suffered burns in the fire and 50 were evacuated from the building.

Twenty-seven fire engines doused the flames after battling for more than five hours. A search operation continued to look for anyone trapped in the rubble, the fire control room said.

The cause of the fire was not immediately clear.

"Distressed by the tragic fire accident at a building near Mundka Metro Station in Delhi. My condolences to the bereaved families. I wish for the speedy recovery of the injured," India's President Ram Nath Kovind tweeted.

Atul Garg, director of Delhi Fire Services, said the building had no clearance from the Fire Department and it was not equipped with fire safety equipment like extinguishers.

The casualties occurred on the second floor of the building, where inflammable plastic material used for manufacturing equipment for security cameras was stored.

The Indian Express newspaper said two owners of a company selling security cameras were detained for questioning as the fire reportedly started from their office. There was no immediate confirmation by the police.

BEIRUT -- A missile struck a Syrian military bus in the country's north early Friday, killing 10 soldiers, Syria's state-run media and an opposition monitor said. It wasn't immediately clear who was behind the attack, one of the deadliest since a truce deal was reached more than two years ago.

The official news agency SANA said "terrorists" targeted the bus in the western countryside of Aleppo, in the Anjara area. Nine soldiers were wounded in the attack, the report said.

There was no claim of responsibility. The area is dominated by the al-Qaida-linked militant group, Hayaat Tahrir al-Sham.

The Britain-based Syrian Observatory for Human Rights -- a war-monitoring group with a network of activists on the ground -- reported the attack but said Syrian opposition forces fired the missile and that the 10 killed were government-allied fighters. 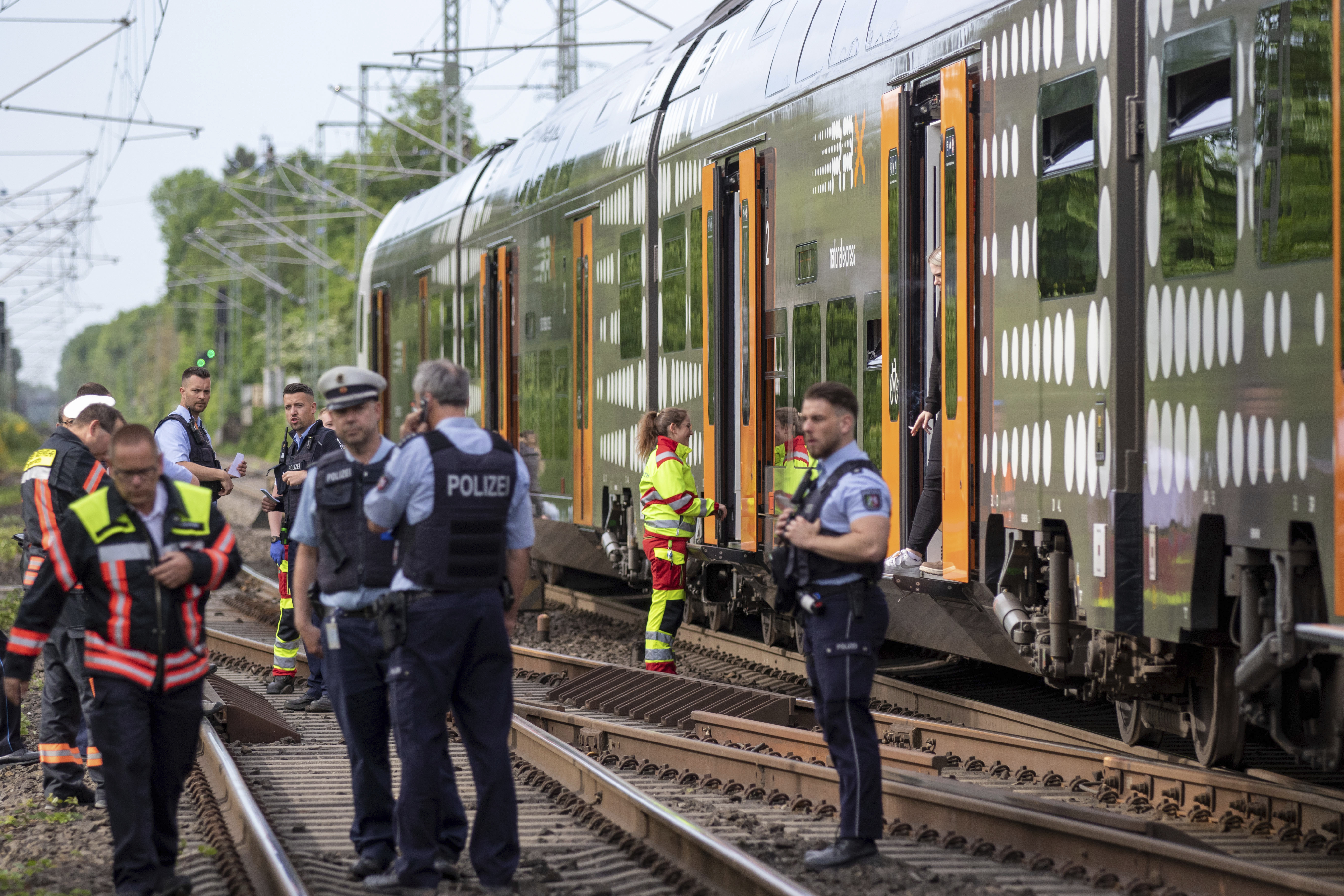 Police officers standing in front of a regional train in Herzogenrath, Germany, Friday, May 13, 2022. Three passengers on a regional train in Germany overpowered an Iraq-born man who wounded five people with a knife on Friday, authorities said. (Ralf Roeger/dpa via AP) 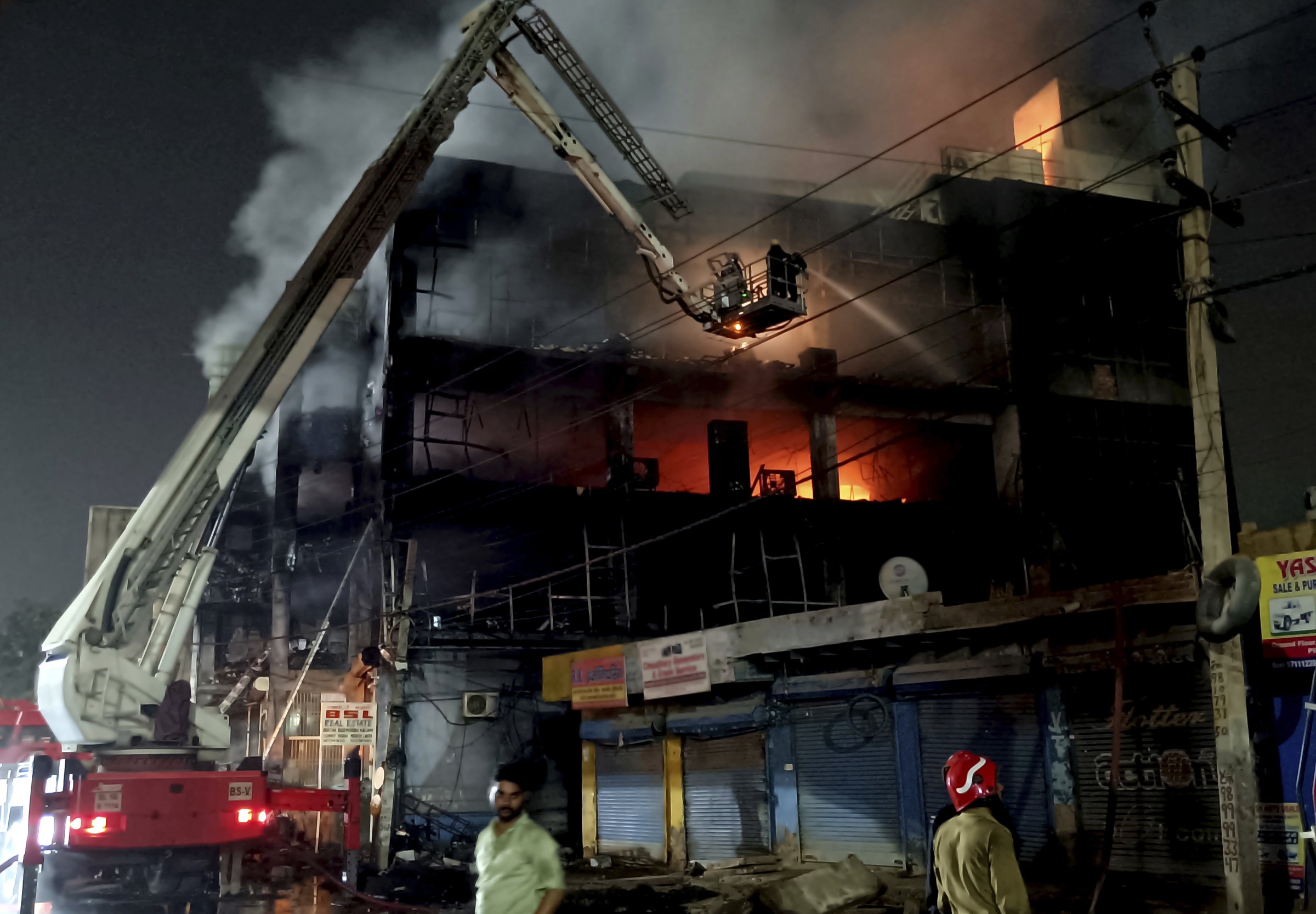