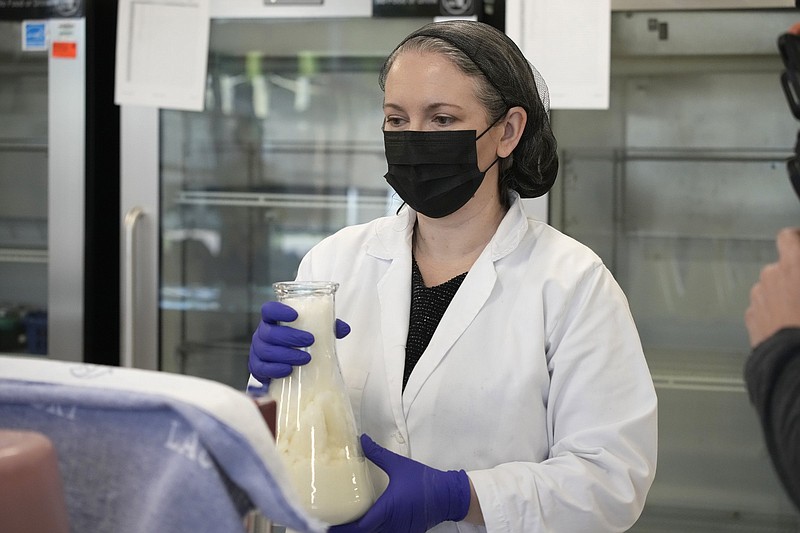 Federal inspectors spotted the potential for baby formula made at an Abbott Laboratories plant to become contaminated months before a recall that exacerbated a nationwide shortage, a government document shows.

The U.S. has seen a widening gap between supply and demand for formula since Abbott recalled Similac and other top-selling brands in February, alarming parents and stoking lawmakers' concerns. Federal officials have investigated the cases of four babies who fell ill -- including two who died -- from cronobacter after ingesting formula made at Abbott's plant in Sturgis, Mich.

U.S. officials are putting an increasing focus on the crisis. The White House has tried to reassure parents that supplies will be replenished, and President Joe Biden met Thursday with manufacturers and retailers to find ways to increase supply. Abbott said this week that it could restart production in the coming weeks and get formula back on shelves within two months, pending clearance from the Food and Drug Administration.

The FDA report obtained by Bloomberg News through a Freedom of Information Act request shows that during a routine visit to Abbott's Sturgis manufacturing facility in September, inspectors determined that employees may have transferred contaminants, including deadly cronobacter, from surfaces to baby formula. In one instance, the report said, records showed that Abbott detected cronobacter in a finished batch of formula that may have been tainted by a worker who touched a contaminated surface without changing gloves. That batch wasn't distributed.

Abbott has said its formula isn't to blame for sickening the infants. "There is no evidence to link our formulas to these infant illnesses," the company said in a statement to Bloomberg, without commenting on the detailed inspection report. Abbott has previously said that it found cronobacter in formula that it didn't distribute in 2019 and 2020, and the FDA has said its inspectors again discovered the pathogen in the plant this year.

The company has drawn a distinction between the contaminants found on equipment involved in production and the microbes detected in the wider environment at the plant. Abbott has said that testing hasn't found cronobacter on anything that comes into direct contact with formula substance. But the 39-page FDA document reviewed by Bloomberg shows that inspectors observed how the products could still become contaminated.

In the report on their September visit, two FDA inspectors said they observed an Abbott processing operator touching "non-food contact surfaces" -- essentially anywhere in the facility that doesn't come in contact with formula. Without changing his gloves or sanitizing his hands, the same worker touched the inside of an ingredient bag that was being weighed.

Such practices can present "a food safety hazard," the inspectors wrote in September. As an example of how it might lead to contamination, inspectors highlighted an instance in June 2020 when a batch of Similac For Spit-Up formula -- which wasn't distributed -- tested positive for cronobacter.

Abbott had listed poor manufacturing practices as a probable cause of that contamination event, including a worker touching a hoist and then opening something "without [a] sanitized, gloved hand." Specifics of what the worker opened are redacted in the report. The inspectors said they discussed with factory management "how this may present a contamination or cross-contact hazard."

The document also detailed five instances of positive tests for cronobacter in environmental, non-food samples from the plant from January 2019 to August 2021.

Minnesota health officials first told the FDA in September about an infant who had ingested Abbott formula and fallen sick with cronobacter. After three additional reports of sick babies over the next few months, the FDA sent inspectors back to the Michigan plant in January. During that inspection, Abbott recalled three formula brands made there: Similac, Alimentum and EleCare. Based on agency inspectors' findings over several weeks earlier this year, production at the plant was halted, worsening shortages that had arisen earlier from supply chain issues.

Abbott said it has been working to address the food safety violations the FDA found in the inspection earlier this year and to upgrade the plant, "including installing nonporous, easily cleanable and sanitary floors."

Government officials' tests of unopened formula containers at the homes of the four sick babies were all negative for cronobacter, Abbott said, and one of three open containers from the homes tested positive. The positive one contained two different strains of cronobacter: one that matched the strain that caused the infant's infection and another matching germs found on a bottle of distilled water used to mix the formula, Abbott said.

Government officials also did genetic testing and learned that the cronobacter strains found at the Abbott plant don't match the ones taken from two infants' samples. The lack of matching strains from sickened infants' samples adds to the evidence from testing of its machinery that the plant wasn't likely to be involved in the outbreak, the company said.

The inspection earlier this year turned up five different cronobacter strains at the Michigan plant. That could indicate sporadic contamination that may be brought about by poor manufacturing practices, said Craig Hedberg, co-director of the Minnesota Integrated Food Safety Center of Excellence.

"If this is the case," said Francisco Diez-Gonzalez, director of the Center for Food Safety at the University of Georgia, "it may explain why the strains they found when they went to the plant may not be the same that were there when the product was contaminated."

Sen. Mitt Romney, R-Utah, wrote to FDA Commissioner Robert Califf on Tuesday out of concern for the shortages and the agency's handling of the recall. Based on a summary of the September inspection, which the FDA made public in March, Romney said he was alarmed to learn that "non-descript contamination" had been found. He asked if more was known that wasn't included in the overview.

The summary "suggests FDA's routine inspection authority is insufficient to meet consumer safety demands, yet its hammer of near-shutdowns of facilities causes a ripple effect throughout the country," Romney wrote.

The FDA has said it will conduct a review of its practices regarding illnesses and recalls related to infant formulas once the immediate public-health risk is minimized. The agency was aware the recall would result in shortages but moved forward "given the food safety concerns," Tara Rabin, a spokeswoman, said in an email.

Despite the lack of specific links between cronobacter found at the factory and the bacteria that sickened the infants, the plant remains a possible source of the outbreak, experts said.

"When you look at all the data on balance, we're in this uncertain space where you can't rule out the possibility that the cases are related to plant production but you can't really prove that they are," Hedberg said.

The FDA is "doing everything in our power to ensure there is adequate product available where and when they need it," Califf said Tuesday. To try to boost supply, the agency is meeting with manufacturers regularly to discuss capacity and output while asking retailers to limit purchases to prevent hoarding.

The Centers for Disease Control and Prevention said Thursday that it has closed its investigation of cronobacter and powdered formula and that no additional cases have been identified.

"There is not enough information available to definitively link this illness to the recalled infant formula," the agency said in a statement.

The Biden administration on Friday urged Abbott Laboratories to do more to ensure that low-income families on federal assistance have access to baby formula amid the shortage.

Agriculture Secretary Tom Vilsack said the company should extend flexibility through the end of August for states and territories to obtain rebates to purchase alternative formulas to ensure supply for people on the Special Supplemental Nutrition Program for Women, Infants, and Children, known as WIC. Nearly half the infants in the program are covered by an Abbott contract.

"We further request that you continue these commitments until Abbott's formula supply meets demand across the country," Vilsack wrote in a letter to Abbott CEO Robert Ford that was released by the White House. "I believe Abbott must take these additional actions to support vulnerable WIC families during this challenging time."

"Going forward, Abbott must take every measure possible to ensure safe production of infant formula as well as a reliable supply, even in the face of disruption," Vilsack told Ford.

Meanwhile, Biden said Friday that he expects increased imports of baby formula to relieve the shortage "in a matter of weeks or less."

He defended his administration's response to the shortage.

"If we'd been better mind-readers, I guess we could have," he said in response to a question about why his administration didn't act faster. "But we moved as quickly as the problem became apparent to us. And we have to move with caution as well as speed."

Abbott said in a statement Friday that it's been focusing on production from a facility in Cootehill, Ireland, to serve state WIC programs. The company has also prioritized formula production at its facility in Columbus, Ohio, to make the popular Similac brand of liquid formula, and other plants are running at full capacity to help replenish supply, it said.

Vilsack also sent a letter to all 50 states "urging them to adopt all possible flexibilities" to obtain needed formula supplies, White House press secretary Jen Psaki said Friday. She rejected a reporter's suggestion that the White House had waited until this week to respond to a shortage that's been intensifying for months.

"We have not waited to take action," she said, describing steps the administration took with states and manufacturers to try to increase supply.

The FDA next week will outline plans for increasing formula imports and other "flexibilities" for domestic producers to boost supplies, Califf tweeted.

On Friday, the House Oversight and Reform Committee sent letters to executives at Abbott, Mead Johnson Nutrition, Nestle USA and Perrigo Co. to ask them what steps they are taking to address the formula shortage.

House Speaker Nancy Pelosi said the chamber will vote next week on two measures aimed at getting more baby formula on shelves.

One would grant emergency authority for the WIC program that would allow relaxing certain non-safety regulations around baby formula.

"Doing so will empower the federal government to relax certain non-safety-related regulations during times of shortage so that we can get nutrition into the mouths of America's babies," Pelosi wrote in a letter to House Democrats.

The House also is expected to vote on emergency funding to help end the shortage.

Information for this article was contributed by Anna Edney, Nancy Cook, Jordan Fabian and Josh Wingrove of Bloomberg News (WPNS).