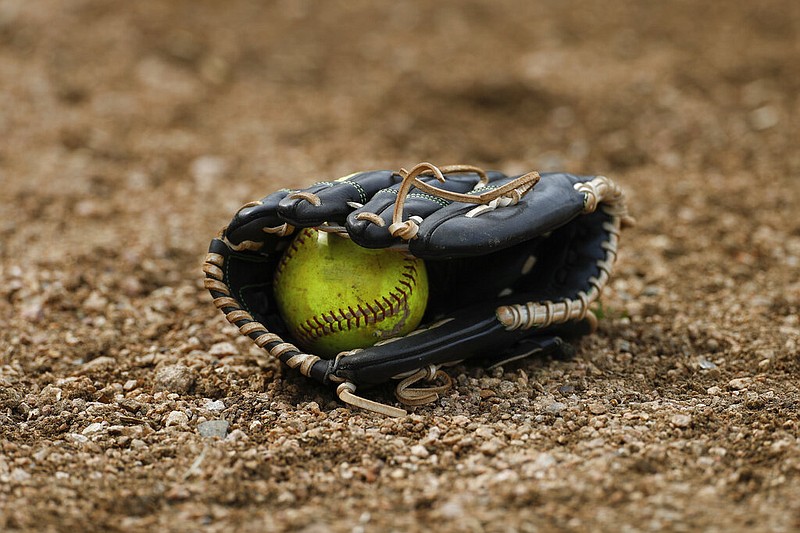 A yellow softball is shown in a glove on a field in this April 5, 2019 file photo. (AP/Aaron M. Sprecher)

HOT SPRINGS -- Sheridan freshman pitcher Cooper Terry held Vilonia scoreless for five full innings and then Callie Kilburn finished the job in two innings of spotless relief as the pair combined for a seven-hit 4-0 shutout of the Lady Eagles to advance to the 5A state softball semifinals.

Terry struck out four batters and helped her own cause by driving in a pair of key runs and scoring twice for the Yellowjackets (23-5), who will next face Greene County Tech this afternoon at 2:30 in Hot Springs.

Sheridan avenged a 5-4 loss to the Lady Eagles earlier in the season as the Yellowjacket pitching staff made several keys pitches to hold Vilonia at bay. None was more important than a couple of key outs at the top of fifth inning as the Lady Eagles had loaded the bases with only one out. Terry got Hope Johnson to a pop out to second, and then she retired Ralyn Kelly on a groundout to short to end the inning.

Kilburn took over for Terry with no outs and two Vilonia runners on at the top of the sixth frame and proceeded to strike out Emma Sowell, forced Grace Barnett into a groundout to second and then erased Dita Porterfield on a groundout to short two pitches later.

Vilonia (16-9) went quietly in the seventh as Kilburn pitched around a Johnson single to fan both Kelly and Elise Troutman to end the contest.

Riley Gillis, Mallory Rish and Emma Goodman each had RBI singles to drive in runs for Sheridan.

Benton (30-0) used a couple of timely hits and a shutout from junior pitcher Alyssa Houston to eliminate White Hall in the second round of the Class 5A state softball tournament action in Hot Springs.

White Hall trailed early as Benton's Elana Scott singled and scored for the Panthers in the first inning for a 1-0 lead.

The very next inning Lydia Bethards stroked a double and eventually came around to score Benton's second run of the contest.

A solo blast from Riley Gilmore at the bottom of the sixth inning and a fielding error an inning before that allowed another Benton run to score closed out the scoring for the Lady Panthers.

Scott, Gracie Redmont, Addison Davis and Bethards all had multiple hits for the Lady Panthers.

Houston went five innings, allowing only one hit and striking out 11 batters as the defending champs continued their quest for a second consecutive state softball championship. Scott threw two innings in relief for Benton.

Weaver took the loss on the mound for the Lady Bulldogs, allowing four runs and surrendering 11 hits over six innings. She also went 1-for-3 at the plate.

It was the final game at White Hall for senior Lila Hood, whom White Hall coach Mark Akins called "a solid player who has shone brightly since her freshman year."

Hood, a University of Texas at San Antonio commit, hit for the cycle and pitched a shutout on the mound in White Hall's 7-0 win over Searcy on Thursday, which included a massive home run on the third pitch she saw at her first at bat.

The Sheridan Yellowjackets broke open a pitchers' duel in the third inning and went on to secure an 8-0 victory in the second round of the state baseball playoffs in Hot Springs.

A controversial play at first base with one out and a runner on first base that went Sheridan's way seemed to take the wind out of Mountain Home's sails as they went on to surrender five third-inning runs in the loss.

With runners at the corners and no outs after Ashton Branson singled and Andrew Thompson walked at the bottom of the third inning, Sheridan catcher Connor Canterberry hit a potential double play ball that Mountain Home shortstop Reed Ellison fielded and tossed over to second base to force out Thompson for the first out. However, second baseman Dillon Drewery's throw to first appeared to pull first baseman Reece Ducker slightly off the bag and Canterberry appeared to have bumped him but Canterberry was initially called safe.

In the process, Branson raced home with the first run and chaos ensued. Both Mountain Home coaches raced out to protest and Sheridan's bench appeared to be ready to rush the field before their head coach signaled them back to the dugout.

Once the call was upheld, play resumed and the second pitch from Bombers starter Jacob Czanstkowski after the stoppage of play sailed behind the next batter Caleb Kuttenkuler, briefly halting play once again.

Czanstkowski then issued four consecutive walks to force in two runs, and then Caleb Patrick laced a single up the middle to drive in another run. Czanstkowski plunked Branson before exiting the game with his team trailing 5-0.

The inning lasted 25 minutes as the Yellowjackets sent 12 batters to the plate.

Mountain Home coach Greg Crow was eventually ejected from the contest after the last pitch was thrown by continuing to argue in the handshake line.

Sheridan (21-8) advances to face the winner of the Marion-Benton contest today at 2:30 pm.