State high court decision mixed on investigations of parents by PAUL J. WEBER AND ACACIA CORONADO THE ASSOCIATED PRESS | May 14, 2022 at 4:26 a.m. 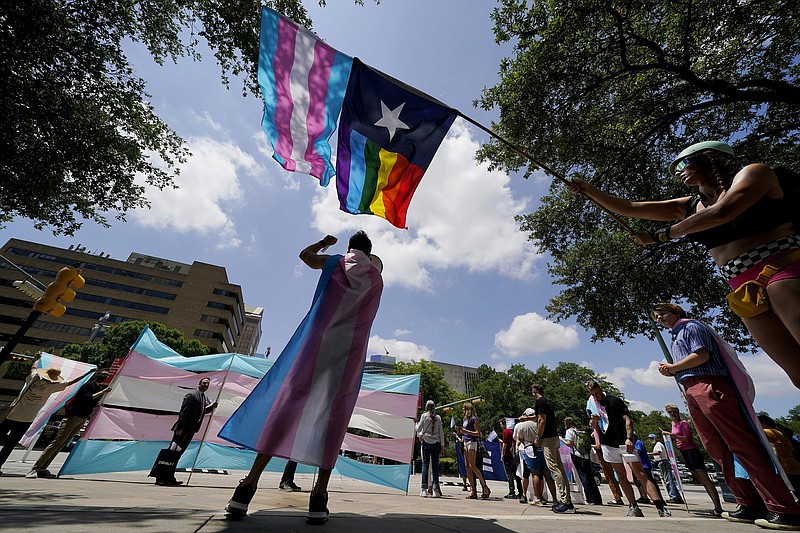 Demonstrators gather in May 2021 on the steps of the state Capitol in Austin, Texas, to speak against transgender-related bills being considered in the Texas Legislature. (AP/Eric Gay)

AUSTIN, Texas -- The Texas Supreme Court on Friday allowed the state to investigate parents of transgender youths for child abuse while also ruling in favor of one family that was among the first contacted by child welfare officials after an order by Republican Gov. Greg Abbott.

The court did not rule on the merits of the investigations, which were the first of its kind in the U.S., only that lower courts in Texas overstepped by trying to block all cases from going forward.

The mixed ruling by Texas' highest civil court, which is made up of nine elected Republican justices, comes at a moment when GOP lawmakers across the U.S. are accelerating efforts to impose restrictions on transgender rights. Both parties in the lawsuit called the decision a victory.

Lambda Legal, which helped bring the lawsuit against Texas on behalf of the parents of a 16-year-old girl, called the decision a win because it put the state's investigation into their family on hold. Although the ruling does not prevent Texas from launching investigations into other families, the state would be foolish to do so now because those families could also seek an injunction, said Omar Gonzalez-Pagan, counsel and health care strategist for Lambda Legal.

"It would be both futile and a complete waste of resources for them to do so," Gonzalez-Pagan said.

Abbott issued a first-of-its-kind order that instructed child welfare officials to investigate reports of gender-confirming care for kids as abuse.

A judge in Austin put that order on hold after a lawsuit brought on behalf of the 16-year-old girl whose family said the state was already investigating their family. It was filed by the American Civil Liberties Union and Lambda Legal.

Brian Klosterboer, a staff attorney with the ACLU leading the case, said the court's decision was "largely good news," citing the relief for his clients as well as the finding that Paxton's opinion and Abbott's directive are nonbinding and do not have a legal effect. Klosterboer said the court's decision clarifies that the governor does not have the authority to change Texas law and though the state's family services agency can decide whether to investigate, it is up to the courts whether the agency can take action against any family reported under this directive.

"His directive is, I think, what caused the most harm because it created a lot of fear and panic across the state," Klosterboer said.

According to Klosterboer, Paxton's office filed an appeal within minutes of the decision.

In a social media post following the ruling, Paxton said he had "just secured a win." Abbott's office did not immediately respond to requests for comment.