Vanquished by Vandy: Razorbacks dropped by home run in 10th 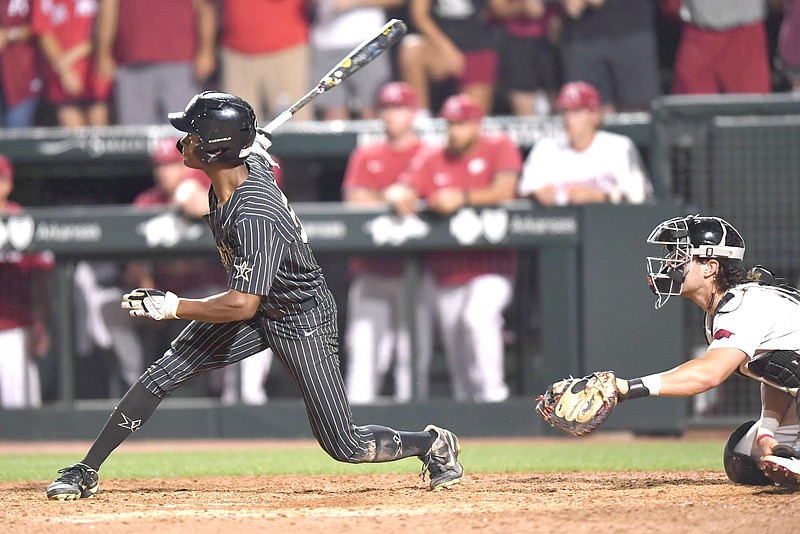 Vanderbilt center fielder Enrique Bradfield Jr. connects for a tie-breaking, three-run home run during the 10th inning to lift the Commodores to a 9-6 victory over Arkansas in the opener of a three-game series Friday at Baum-Walker Stadium in Fayetteville. More photos at arkansasonline.com/514vandyua/ (NWA Democrat-Gazette/Andy Shupe)

FAYETTEVILLE -- The University of Arkansas trailed by five runs in the early innings for the second consecutive conference opener on Friday against No. 21 Vanderbilt.

Again the No. 4 Razorbacks caught up, but unlike last week at No. 18 Auburn they could not blow past the Commodores and paid for it.

Enrique Bradfield Jr. slashed a three-run home run inside the right-field foul pole off Brady Tygart in the top of the 10th inning and the Commodores took a 9-6 win before a crowd of 11,772 at Baum-Walker Stadium.

Tygart (2-3), working in his third inning of relief, had not allowed a home run all season and only one extra-base hit. But he hung a breaking ball and Bradfield smacked it for his seventh homer of the season.

The Razorbacks rallied from a 5-0 deficit through three innings to forge a tie, taking Arkansas starter Connor Noland off the hook and pulling a potential win from freshman left-hander Devin Futrell.

Vanderbilt closer Thomas Schultz (4-1) worked the final three innings, allowing two-out walks in the eighth and ninth but working around them to allow no runs.

Both teams hit three home runs, but Bradfield's was the loudest. It came after Tygart walked Javier Vaz to open the inning and Parker Noland doubled off the left-field wall.

Tygart had a chance to get out of the inning. He induced a fly ball to shallow right field. Then nine-hole batter Carter Young's suicide squeeze bunt fell right in front of the plate, allowing catcher Michael Turner to quickly scoop it and tag the charging Vaz for the second out.

Tygart got ahead 0-2 before Bradfield rallied for the game-winning hit.

Futrell worked out of a third-inning jam with runners on second and third with one out after Cayden Wallace's double.

Connor Noland ran into trouble in the second inning by struggling to locate an out pitch. After Vaz drew a one-out walk, Vandy designated hitter Parker Noland battled back from 0-2 and launched an opposite-field home run to left on a 2-2 count to make it 2-0. Parker Noland's fifth home run of the season was the third allowed by Connor Noland, including in back-to-back starts.

The Commodores weren't through. Tate Kolwyck walked and Carter Young hit a dribbler through the right side for a single. Bradfield's squeeze bunt scored Kolwycz, then Davis Diaz's bloop single to center made it 4-0.

Vanderbilt stretched its margin to 5-0 in the third after Dominic Keegan drew a leadoff walk. He moved to third on Vaz's one-out single and scored on Parker Noland's sacrifice fly.

The Razorbacks began their long comeback in the fourth on their first hit, Slavens' leadoff home run, a 422-foot shot that landed on top of the Hunt Center beyond the right field fence.

Jalen Battles led off the bottom of the fifth with an opposite-field double off Futrell, who looked like he might escape after retiring the next two batters. However, Robert Moore worked a 2-2 count before launching his sixth home run over the left-field fence.

Slavens followed with an opposite-field shot to left, his team-high 13th home run, to draw the Hogs within 5-4.

Arkansas worked reliever Nick Maldonado for a tying run in the sixth but could have had much more.

Braydon Webb reached on a one-out error and scampered to third when Maldanado threw wildly on a pickoff throw. Jace Bohrofen's single to left field made it 5-5. Battles ripped a double into the left-field corner, sending Bohrofen to third, and Wallace drew a walk to load the bases.

Vanderbilt Coach Tim Corbin called on left-hander Nelson Berkwich, who engaged in a 10-pitch battle with Michael Turner before inducing a sharp ground ball at first to Keegan, who started a 3-6-3 double play to get out of the inning.

The Commodores jumped back on top in the seventh. Catcher Jack Bulger launched a shot to deep left center off Evan Taylor that hit the top of the wall for his fourth home run of the season and a 6-5 Vandy lead.

Moore led off the bottom of the inning with a routine fly ball toward the line in deep right, but Spencer Jones over-ran it and it evaded him for a double.

The Razorbacks launched into situational hitting mode, with Slavens and Chris Lanzilli delivering ground balls that moved Moore up and in to make it 6-6.

SHORT HOPS An Arkansas fan grabbed an adult raccoon with his bare hands and walked it out of the stadium after the seventh inning. … Enrique Bradfield Jr. made a sensational diving catch on a Jace Bohrofen line drive in the fourth inning, while Bohrofen robbed Vandy catcher Jack Bulger with a running catch in the right-center alley in the third. … The Commodores had three stolen bases — two by Bradfield (an SEC-best 36 for 36) and one by Javier Vaz (5 for 6). The last time Bradfield was caught stealing came last May 27 by Arkansas catcher Casey Opitz in the SEC Tournament. … Kendall Diggs drew his 14th walk of the season in the second, giving him more walks than hits (12) as one of two Razorbacks with that stat (Zack Gregory 27:25). … Arkansas 2B Robert Moore spent a few minutes during Vanderbilt’s batting practice exchanging hugs and a chat with Vanderbilt’s Bradfield and Bulger. … Scheduled starters for Sunday’s 2 p.m. finale are Vanderbilt LHP Carter Holton (6-3, 3.82) and Arkansas RHP Jaxon Wiggins (6-1, 5.40).