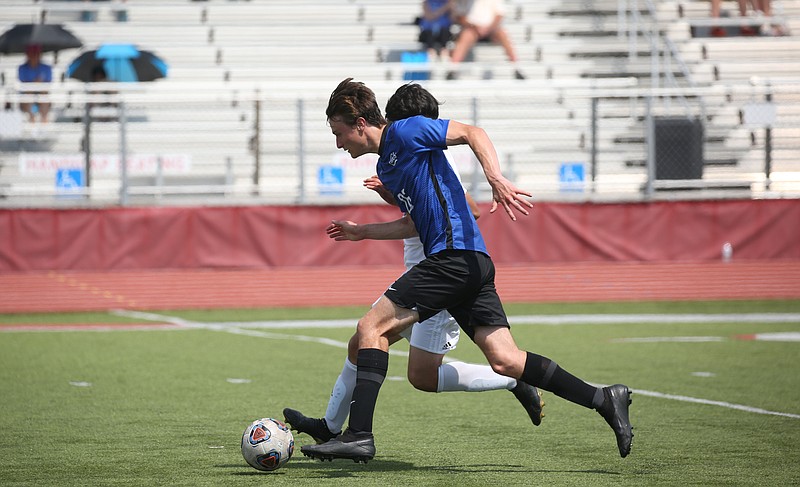 Jonathan Caldwell, center, moves the ball down the field for Conway during a playoff game against Little Rock Catholic in Conway on Friday, May 13, 2022. See more photos at arkansasonline.com/514soccer/ (Arkansas Democrat-Gazette/Colin Murphey)

CABOT -- Pregame practice made perfect for top-seed Conway as the Wampus Cats defeated Little Rock Catholic 2-1 on Friday at Cabot High School to advance to the semifinals of the Class 6A boys soccer tournament.

Conway Coach Matthew Page puts his team through a series of drills before each match. One of those exercises, and perhaps the most important one that paid off in Friday's game, is the "turn-and-shoot drill," when in the 67th minute and with the score tied 1-1, Conway's Will Childers came through with what became the eventual winner.

The scoring started in the 7th minute when a 15-yard strike from Conway's Ty Fisher put the Wampus Cats ahead 1-0.

In the 56th minute, Catholic's Essa Kassissieh drove into the box and scored the equalizer to level the game at 1-1. It was the first of a series of Catholic attacks created by Kassissieh that drove his team forward.

"He has the qualities to play in that higher and wide position. ... He was gonna have his chance and he took it," Catholic Coach Ryan Lawrence said.

With temperatures consistently in the 90s and the tournament being played on Cabot's turf field, Conway had the good fortune of receiving a first-round bye as the No. 1 overall seed. On Thursday, as the Rockets were playing 100 minutes against Springdale Har-Ber before winning on penalty kicks, Page opted not to practice. Instead, he let his players rest for their quarterfinal matchup.

That rest paid dividends as both coaches noted the impact the heat had on their teams.

"With the temperature, you can see them fading, there's nothing else they can do," Lawrence said.

"There were times where I was like, 'I don't know how that kid's still running,' " Page said.

It was the third time this season that the teams have met, with Conway winning both previous matchups by a combined 4-1.

"[Our kids] know each other like the back of their hand, so it didn't matter what we did," Page said. "They know their strengths. They know their weaknesses. It was just one of those coin flip-type games."