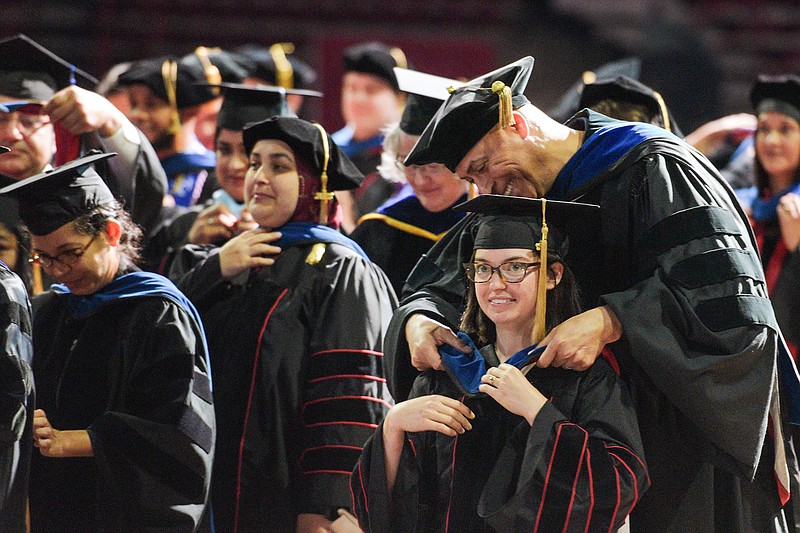 Alison Ramser and other students receive their doctoral hoods on Saturday, May 14, 2022, at the University of Arkansas' main commencement ceremony inside Bud Walton Arena in Fayetteville. The event, at which only graduate students were recognized, including Ramser, who earned a Doctor of Philosophy in cell and molecular biology, was one of several commencements that took place over the weekend at the university. Visit nwaonline.com/220515Daily/ for today's photo gallery. (NWA Democrat-Gazette/Hank Layton)

FAYETTEVILLE -- More than 6,500 students went over mountains, through valleys and across rivers to get their degrees at the University of Arkansas' main campus this semester, said interim Chancellor Charles Robinson.

In his commencement address at Bud Walton Arena on Saturday morning, Robinson compared the college experience with the classic song "Ain't No Mountain High Enough," recorded by Marvin Gaye and Tammi Terrell in 1967.

In literature, a mountain often refers to a difficult task, said Robinson. Valleys refer to feelings. And it is the current of a river -- the unpredictable current of life -- that can sweep a person away.

"The lessons found in the song are applicable for today not just because I like the song, but because they speak to the notion of having a passion for a goal and an unyielding determination to reach it no matter how challenging the obstacles that might get in the way," said Robinson. "Each of you has had to manifest a strong determination to deal with the myriad of barriers in your college experiences just to reach this day. Your persistence has helped you to earn a stellar education while also allowing you to improve the skills and strategies necessary for overcoming challenges and remaining positioned for purpose throughout your life.

"That is the lesson at the heart of 'Ain't No Mountain High Enough.' When we know our purpose, when we have the skills and the courage and the confidence to work to achieve it, nothing can stop us."

Several universities in the state held commencement ceremonies on Saturday, including the University of Arkansas at Little Rock.

During the main commencement ceremony in Fayetteville on Saturday, an honorary doctorate was bestowed on Bobby Estell, better known as the radio and television personality Bobby Bones.

"I'm so jealous that you get to do this," Bones told the crowd. "I couldn't afford to get up here to go to school. I had to work. I stayed and graduated at a college in southern Arkansas. So for me to be here is awesome."

Bones said the three "coolest days" of his life were the day he got married, the day he got his honorary degree, and the day he ran into UA Head Football Coach Sam Pittman at a urinal in Bud Walton Arena.

"We were both there at the urinal, and I just wanted to talk to him, but there are rules," said Bones. "I kept my eyes forward and I waited. And then he washed his hands and I said, 'Woo pig.' But that was a big moment for me."

Bones is the host of the nationally syndicated iHeartRadio program "The Bobby Bones Show," which broadcasts to over 185 stations and is the No. 1 country morning show with millions of monthly listeners, according to the commencement program.

Bones was the youngest-ever inductee into the National Radio Hall of Fame, according to the program. His breakout TV series for National Geographic, "Breaking Bobby Bones," is streaming now on Disney+. He has served as the official in-house mentor on ABC's "American Idol," won season 27 of ABC's "Dancing with the Stars," and serves as host and executive producer of Circle Network's "Opry."

The university awarded the Dali Lama with an honorary doctorate in 2011.

"They said the Dali Lama was here a few years ago," said Bones. "And I said, 'Boy that is a drastic fall.'"

Bones said there are two things you can control in life -- your attitude and your work ethic.

"Everything else you do, somebody else has influence on," he said. "For me, it's always been focusing on the small things that make the big things happen."

He compared it to training for triathlons.

"I've never been the most talented person in the room. I'm not the best looking. I'm not the best speaker. I'm not even my dog's favorite parent. My wife is. But all of that has made me develop just a work ethic. I realized a long time ago that I probably wasn't as naturally gifted as everybody else. But I also knew that I could and I would work the hardest to achieve the goals that I wanted to achieve."

He told the graduates to show up for work on time and have a great attitude.

Gov. Asa Hutchinson delivered a video welcome to the graduates, noting that this is the 150th anniversary of the first day of classes at the University of Arkansas in Fayetteville.

"Arkansas was just 35 years old in 1871," said Hutchinson. "We are grateful that the state's leaders understood that for Arkansas to prosper, higher education must be a priority. Over the past 150 years, hundreds of thousands of students have availed themselves of a first-rate education and have moved on to change the state and the world. ... You're heading into a world that needs your insight, creativity and energy. Don't think of today as the end of your education, but as a stop on the way to learning even more. One of my goals is to make Arkansas such a great place to live and work that all of our graduates will come home to make the Natural State an even better place."

Among those receiving their diplomas at the University of Arkansas at Little Rock on Saturday were Cassandra Dean of Little Rock, a mother of six who was receiving her fourth degree from the university; and Christen Alsup of Benton, who received her bachelor's degree in elementary education 19 years after she first started college. 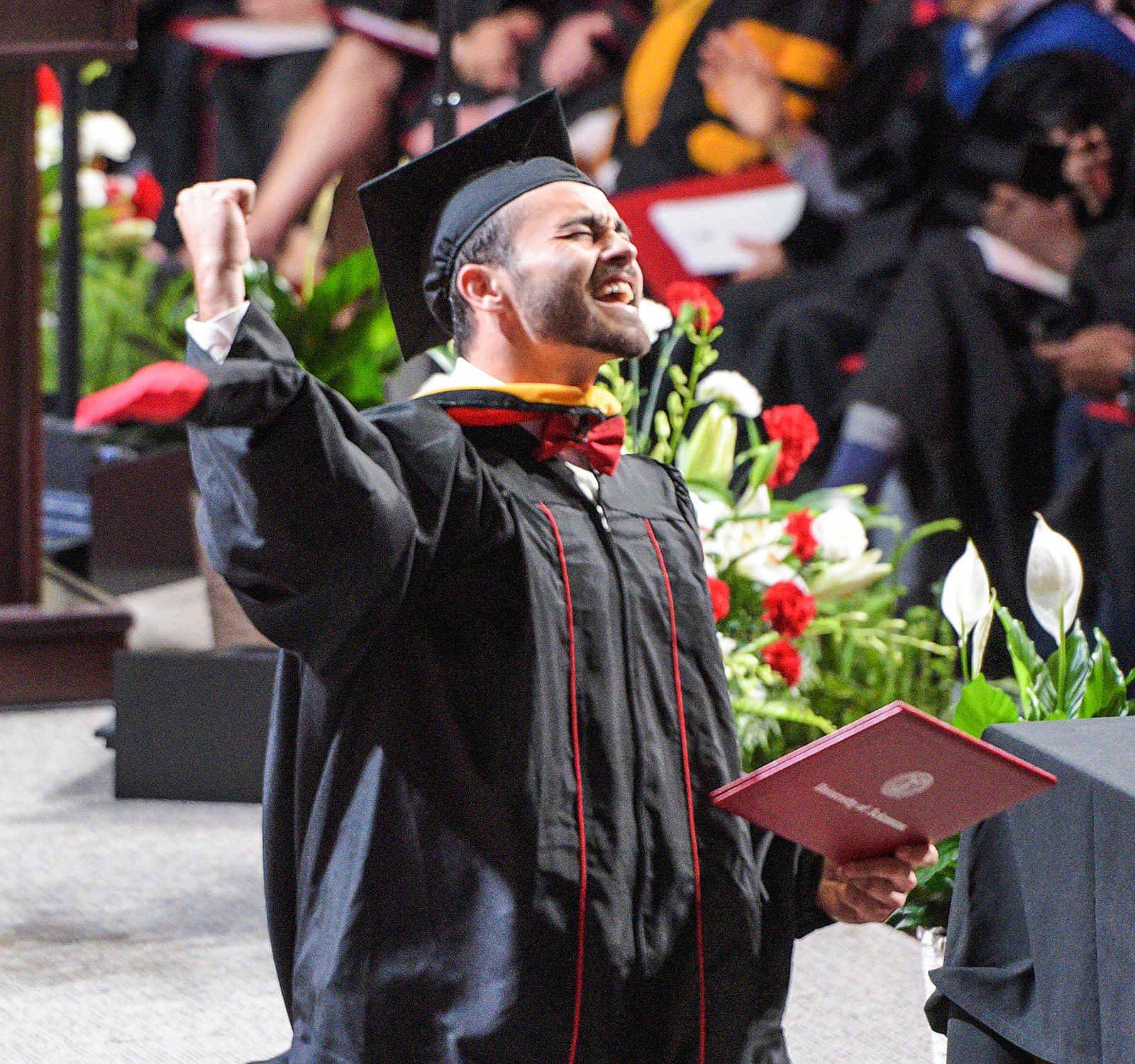 Levi Jones celebrates on Saturday, May 14, 2022, after receiving his Master of Science in finance at the University of Arkansas' main commencement ceremony inside Bud Walton Arena in Fayetteville. The event, at which only graduate students were recognized, was one of several commencements that took place over the weekend at the university. Visit nwaonline.com/220515Daily/ for today's photo gallery. (NWA Democrat-Gazette/Hank Layton)