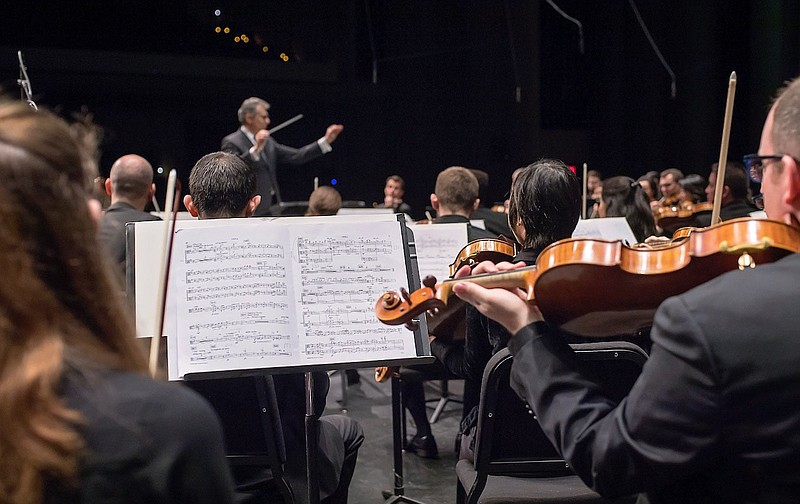 Musicians travel to Northwest Arkansas from around the world to perform in the Artosphere Festival Orchestra under the baton of acclaimed Maestro Corrado Rovaris. (Courtesy Photo)

The Artosphere Festival Orchestra returns to the Walton Arts Center this spring to showcase the talents of 90 young musicians in three very different performances. Many of the players have been part of the AFO since the founding of Artosphere in 2011 and travel to Northwest Arkansas from around the world to perform under the baton of acclaimed Maestro Corrado Rovaris. Rovaris, born in Bergamo, Italy, and graduated from the Conservatory of Milan with degrees in composition, organ and harpsichord, took a few minutes to answer these questions for What's Up!

Q. What was your first musical love, the thing that made you want to study and perform music?

A. I was born into a music family. My father was an organist and chorus master, and music was always a part of my family since I was a child. It was in my life every day, so it was very natural for me to study to become a musician. My brother is a musician as well.

Q. With your extensive background in opera, what opportunities excited you about forming and guiding the Artosphere Festival Orchestra?

A. In my musical life, I always divided my time between opera and concerts, so when we had our idea for the Artosphere Festival Orchestra, it was very natural for me to imagine an orchestra with talented musicians coming from around the United States and the world. My idea was to have orchestra and many chamber music concerts. The first musicians I hired were the Dover Quartet, because from the beginning I wanted musicians who bring a chamber music approach even to a big orchestra.

Q. Tell me about your musicians -- where do they come from and why do they want to play in the AFO?

A. Our musicians come from all around the United States, and a few even come from Europe. We know they like to come and play for Artosphere, because everyone always wants to come back. During this difficult time [of the pandemic] it was important to stay connected and support our colleagues, and like the rest of the world, technology has helped us maintain this connection.

Q. Tell me about this year's music selection and the overall theme for the performances?

A. When I learned the theme of the festival this year was the sun, I tried to tie my selections to that theme. When you think of the sun you think of energy, which is why, for example, I chose the Italian Symphony by Mendelssohn, because it radiates with Mediterranean light and the exuberant joy of life. At the same time, I wanted to present the opposite, so I chose Notturno by Martucci, which is a short gem that presents an intimate melancholic space.

We always present something outside the usual repertoire, and this season we chose to present "Aconagua" Bandoneón Concerto by Astor Piazzola, who brought tango to the classical music world, and coupled it with another signature work by him called "Tangazo."

When I picked the third program, I chose two energetic works to surround an ethereal masterpiece. For the first work I chose "Don Juan" by Richard Strauss for its swagger and energy, and also, because it matches the virtuosity of our orchestra. When I think about the sun, I also like to think about the sunset, which is a beautiful moment of the day. For this reason, the second work presented in the program is Four Last Songs by Richard Strauss. Many musicologists have written that these should be considered among the most beautiful music ever composed; they lift the listener to a different, metaphysical dimension. Finally, we end with The Firebird Suite by Stravinsky, a masterpiece everyone knows that I feel is an ideal closing piece for our festival.