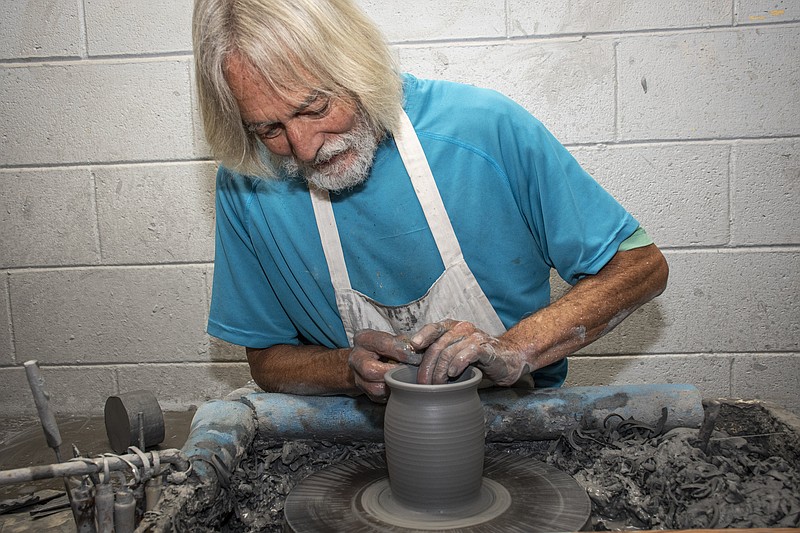 HOT SPRINGS — It's a Tuesday morning in April at Dryden Pottery, and James Kimberly "Kimbo" Dryden is working on a set of bowls.

"I'm just trimming these up," he says of the pieces, whose edges look like flower petals or seashells. "I made them yesterday and they are kind of rough on the bottom."

The 69-year-old Dryden stands at his potter's wheel in the narrow, cinder block "wheel room" at the pottery, a longstanding Hot Springs institution located at the base of West Mountain. When the bowls are finished and glazed in the vivid way unique to Dryden Pottery, they will be offered for sale in the retail shop.

Pottery is what the Drydens do. Kimbo's dad, James "Jimmy" Dryden, founded Dryden Pottery in 1946 in Ellsworth, Kan., and moved it to Hot Springs a decade later with his wife, Helen, when Kimbo was 3.

"I grew up here," says Kimbo, who is thin and tan and often smiling. "This guy who worked here, a potter, just grabbed me one day and stuck my hands in the clay. My feet weren't even on the ground. He smashed my hands in the clay and made me make a pot."

It was the beginning of a lifetime spent making the brightly colored pottery coveted by Dryden collectors, and carrying on in the creative legacy of Jimmy, who died in 2004.

On April 23, the Arkansas Arts Council announced that Dryden was its 2022 Arkansas Living Treasure.

A reception for him will be held from 2-4 p.m. Friday at the Hot Springs Convention Center, 134 Convention Blvd. The free event will include a five-minute film about Dryden and a pottery demonstration. His pottery will also be on display.

Dryden was nominated by longtime colleague Jim Larkin, owner of Fox Pass Pottery in Hot Springs and chosen by an independent panel of judges.

"He has been a very influential person to a lot of potters," says Larkin, the 2012 Living Treasure recipient. "So many people that came into his father's shop were influenced in part by Kimbo ... Kimbo has stuck to the tradition of Dryden Pottery. It's a singular work, and very recognizable."

Patrick Ralston, director of the Arkansas Arts Council, concurs via a news release. "Kimbo Dryden is truly a one of a kind. His skill, creativity and passion can be seen in every piece of pottery he throws. It's an honor and a privilege for the Arts Council to present this award to him."

The Living Treasure program, which began in 2002, "recognizes an Arkansas creative who excels in the creation of a traditional craft or folk art and who preserves and advances their craft through community outreach and teaching others," according to the arts council.

Ever self-effacing, Dryden's reaction to news of the honor was to credit his father.

"Without him, I'd be digging ditches or be in jail. He should get this award, not me." 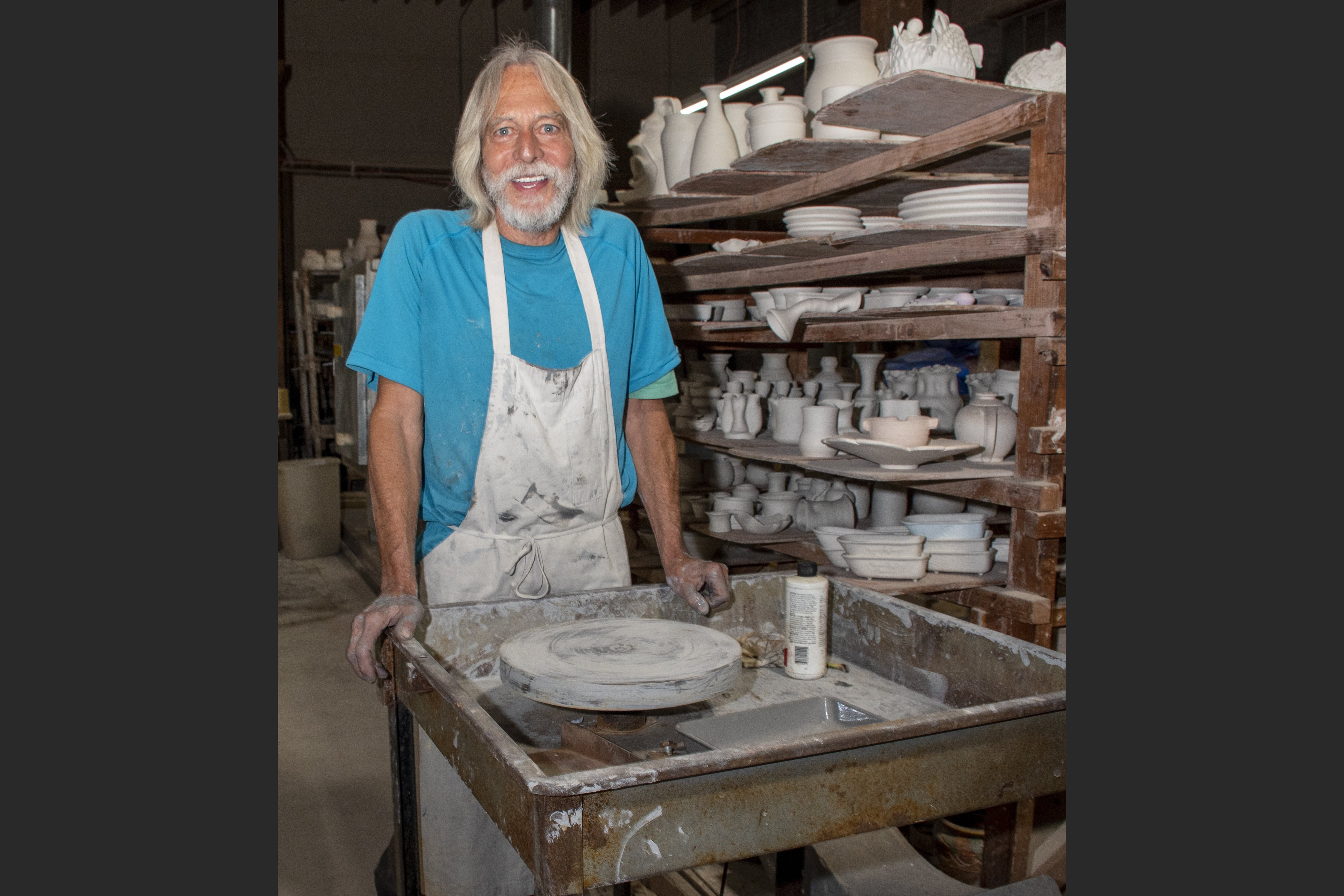 Kimbo Dryden grew up at Dryden Pottery, which was founded in Ellsworth, Kan., in 1946 by his father, Jimmy Dryden. The business moved to Hot Springs in 1956, and Kimbo started working there full time when he was 18. (Arkansas Democrat-Gazette/Cary Jenkins)
Growing up, the future potter wasn't the greatest student.

"I made Ds and Fs," he says with a chuckle. "The teachers said I was hyperactive, and had an overactive imagination."

By his teens, he was hitting the road regularly.

Eventually Dryden's parents told him to at least let them know when he was leaving and where he was headed.

He was hitching in those days because he didn't start driving until he was 21. But he had a pilot's license when he was still a teenager, making him one of the youngest pilots in the state. Back then Jimmy Dryden, also a pilot, flew his pottery to customers in other states, though it sounds like not all the flights — or at least not all the landings — were smooth.

In 1970, Dryden went to study at Big Creek Pottery School in Davenport, Calif. He then returned to work in the shop, making vases, plates, bowls, mugs and other pieces, continuing the tradition of unique Dryden works.

"We make something that no one else is doing," he says. "Our colors are real bright."

According to the arts council release about this year's award, Dryden Pottery "uses about 20 different colors, all formulated in-house using different metal oxides and available materials that result in a recognizable look and style, which is why the family's slogan is 'A Melody in Glaze.'"

Those bright, glazed melodies are evident in the Dryden showroom as pottery of all shapes and sizes is arranged on tables for customers to peruse. There are also vintage pieces, some of which date back to Jimmy's time in Kansas. And then there is the 9 ½-foot-tall "World's Tallest Wheel Thrown Vase," which Kimbo Dryden says he made after a challenge from his dad in 1978 and that the business used to attract visitors.

Gary Miller of Hot Springs Village is a collector of Dryden family pottery, and a fan of how Kimbo creates natural elements in his work.

"I like his adaptation of the natural world to clay," he says. "He throws the vessels and applies hand-formed leaves and branches to the outside of the pieces. I just find this work particularly detailed and lifelike."

"In the '80s, he was throwing really large pieces of pottery that were 20, 24, even 30 inches tall. I and many other collectors are always looking for those big pieces."

More than 500 employees have worked at Dryden Pottery over the years, according to its website.

"So many potters cut their teeth here," Dryden says. "High school and college kids would come in the summer and then they'd be gone, but some of them lasted a while."

One of those was potter David Dahlstedt who went to work for the Drydens in the '70s when he was a student at Henderson State University.

"For me, it was lots of discovery," says Dahlstedt, who owns Mountain View Pottery. "I didn't really have much experience ... It was a lot of fun. Kimbo had just come back from Big Creek. They would bring busloads of tourists through, and they had me working on the wheel. That was part of the tour. I also did slip casting."

Jimmy Dryden eventually helped him get a job at the Ozark Folk Center in Mountain View, he says.

Kimbo's pottery, Dahlstedt says, "has a lot of energy. A lot of his work is really animated with little creatures. That was always entertaining."

In 1975, Jimmy Dryden recruited Nguyen Loi, a Vietnamese artist and refugee temporarily housed at Fort Chaffee in Fort Smith, to work at the pottery, were Loi was employed for 10 years.

"He actually wasn't a potter," Kimbo Dryden says. "We taught him how to throw, and he learned pretty quickly."

Longhua Xu, the Hot Springs artist and Shanghai, China, native who was the council's 2019 Living Treasure, also spent time working at the pottery.

"He came in looking for clay, and I started talking to him," Dryden says. "Then I found out he could make a mold. He worked here for a year or two and did a lot of molds for us." 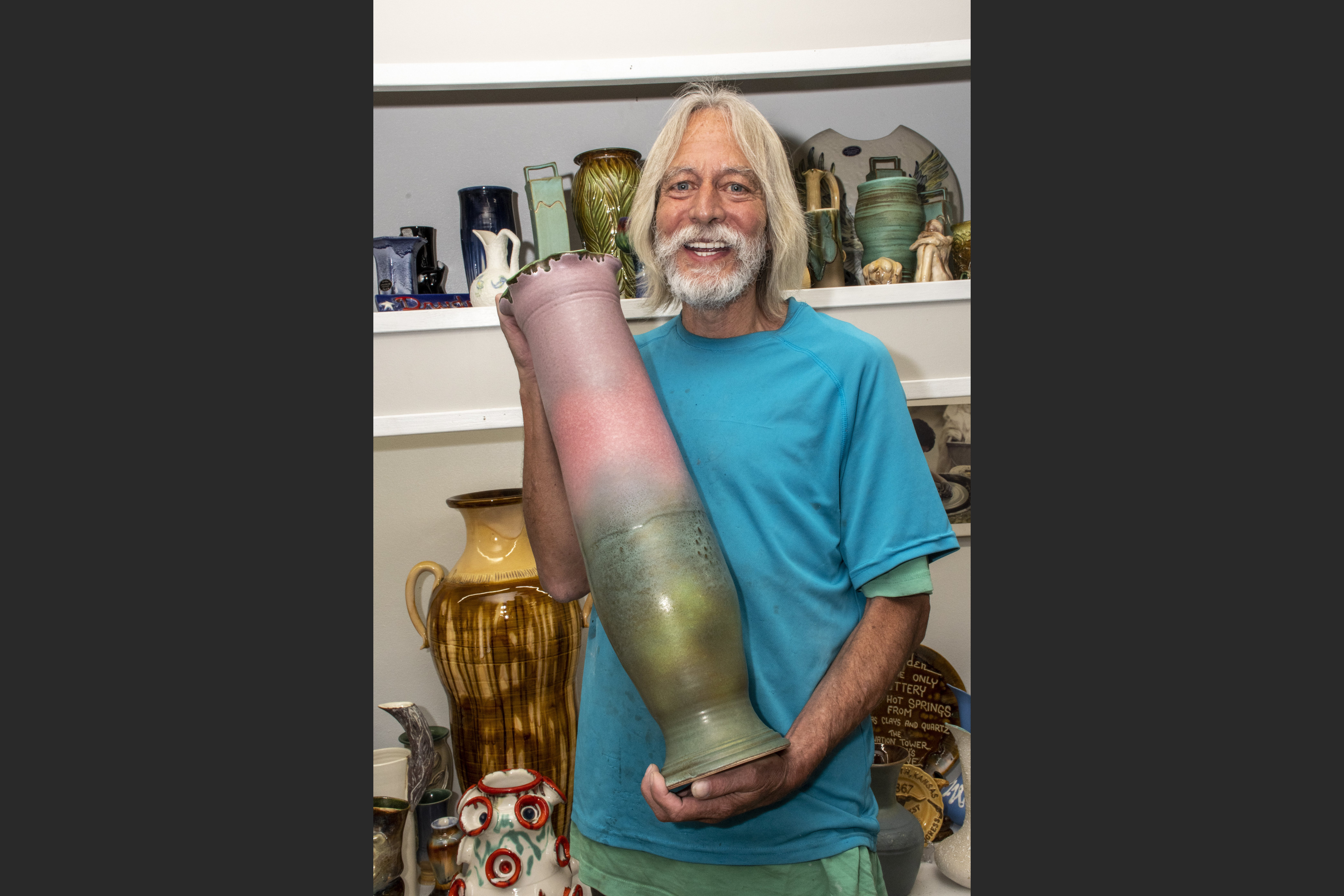 Kimbo Dryden with one of the large vases he has made for Dryden Pottery in Hot Springs. (Arkansas Democrat-Gazette/Cary Jenkins)
Dryden history is evident throughout the showroom, not only in the pottery made by the family and Nguyen, but in old newspaper clippings, photos and scrapbooks.

"Me and my sister always talk about how wonderful our parents were," Dryden says, flipping through a photo album as a family from Texas shops. "They were hippies, but didn't know it. Their lives were us. They were very dedicated to us, and my mom was like the neighborhood mom. She was a nurse during World War II. She helped everybody."

Dryden, a grandfather of eight, retired from running the pottery in 2013. His son Cheyenne managed the business for a while before moving to Oregon. His youngest son, Arrow, is a glass artist in Hot Springs. Now his eldest son, Zack, runs Dryden Pottery and keeps it stocked with new pieces.

"I've come to love it," says Zack, who had his own custom tile business before taking over the pottery. "It's a labor of love and a good life. I'd like to keep growing it, and get back to a small factory again and get into a little higher production."

And then there's the actual pottery work.

"We are exploring the giant pool of creativity where you can mix up form and color and function," Zack says. "You can make one-of-a-kind pieces forever and never make the same thing twice."

He says his father "has always been able to fix any problem. It doesn't take him long to find a solution. He can weld, he can do machinist stuff, he can do all kinds of things ... Seeing my dad get this award is very inspiring. It's a good feeling."

Miller says that Dryden being named a Living Treasure "was long overdue."

"He's not interested in sounding his own horn ... and he's not out there bragging about his work. Because of that, I think he's never gotten quite the recognition I believe he's deserved."

Dryden, who lives about four miles from the shop on 30 acres, maintains his creative whimsy with clay.

"Lately, I've been making these crazy fish heads," he says, picking up a cartoonish fish he created with a huge, gaping mouth outfitted with a set of his old dentures. "The dentist thought that was hilarious."

After looking around the retail space a bit more, he asks, "Want to see me make something?"

Back in the wheel room, he begins throwing a piece of clay.

As the clay spins, he uses his hands and a small tool to manipulate it upward into the form of a vase, all the while chatting with Zack and lamenting what he says is the poor quality of the clay. Just a few minutes after he started, he places the piece on a shelf in front of the wheel.

Like anyone who is good at what he does and who has done that thing for decades, he makes it look easy.

"This is just what I do," he says. "What I like is people giving me compliments, and I like opening up the kiln and seeing that it didn't screw up. It's a hard job. People come here and say, 'Is this where the magic happens,' and I tell them this is where the hard work happens. There's no magic to it at all."